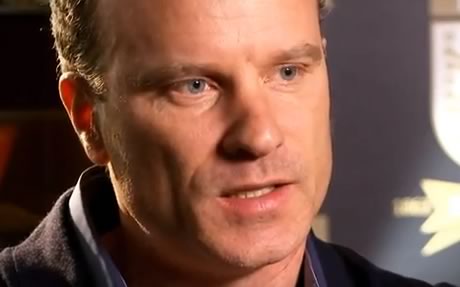 Dennis Bergkamp says he would be open to a return to Arsenal in the future in some kind of coaching role.

Currently assistant manager at Ajax, working with former international teammate Frank de Boer, the Arsenal legend told an FA Q&A that coming back to Arsenal is something he’d welcome.

Asked if he’d consider a coaching role with the Gunners, Bergkamp, who spoke this week about Arsenal’s new British core, said, “I would yes. We have started something good now at Ajax and I know a little bit in my role now, what I like and what I don’t like so if I could fulfil a similar role abroad, especially at Arsenal.

“That would be one of the things that I would like to achieve in the future. But not in the near future because we have just started here.”

Obviously his flying issues preclude him from becoming manager of the club, or any club, but the idea of Dennis coaching Arsenal players is mouthwatering indeed.

As he says though, it’s not something that’s going to happen soon, but one day is good enough. One day.

I wouid love him to take over as manager at arsenal!

Who thumbs this down?

The thumbs down are for him taking over imminently, I guess. Eventually I think everyone would love to have God running things at Ashburton.

moderation should be moderate
Reply to  Dog Eat Arse

i think the thumbs down is because people read ‘precludes him from being manager of any club’ right at the end of the article, grew wistful, sighed, shelved the reality of things away, and hated seeing it again in the comments!

Personally I’d take Frog as manager at the minute so the thought/dream of Bergkamp taking over any day whether nor or next year makes me happy wee.

It is hilarious to see that after we just about beat Swansea a certain brigade are back out in full force.

I would still have him playing.

He could actually be asleep and still be better than cunting Gervais!

Such a bizzarre number of thumbs down! An appeal for automatic change isn’t neccessarily anti-wenger but pro-Bergkamp. I would love to see Hummels come and play for the club but that doesn’t mean to automatically demote Vermaelen and claim I want him out. We could even try the Liverpool tactic of having two managers alla Roy Evans and Houllier (just because it failed for them doesnt mean it would fail for us, we are the Arse after all!)

That was what I thought. Why wouldn’t people want him there, helping to coach our strikers? It’s Dennis after all. He is the reason I love Arsenal as much as I do.

You have to remember that there are an unfortunate amount of people on this board that support Arsene and not Arsenal. How dare you think of the club before him…

Nope, that was only a temporary phobia during his playing days – he feared a career-threatening knee injury if he sat in those rotten airline seats..

I love you Dennis x

Just the legend that our current squad needs to look up-to!

“The legend Arsenal deserves, but not the one it needs right now.”

Yeah I went there, sorry!

I would love him to play right now. Just behind Giroud there. He is bergkamp you know.

In all seriousness if there’s one guy I’d love to see back at the club in some capacity It’ll have to be him.
Get back here you!

Fergie the Gooner
Reply to  Sheil

He’s still got it, he looked brilliant in a charity match that was on tv last year and scored a lovely curled goal from outside the box too!

Hopefully he gets some great coaching experience from Ajax and puts it into use for us some day.

Ummmm I dont understand why were fucking around then! Wenger sign him up!

I’d heard somewhere that, one day, he would return to walk amoung us.

heh…I see what you did there….

Matthew 24:42 “Therefore keep watch, because you do not know on what day your Lord will come.”

Dennis would be welcomed back in any form or capacity.

I would cut my balls off to have him in his prime playing for us right now.

The descent of God…

Dennis coaching Jack would be incredible, wonder if in the future it’ll be JW10 instead of DB10

both DB10 and JW10 will be remembered. You don’t forget your legends. Even 1000 years down the line.

Aye, he could never be manager because of his Mr. T-esque fear of flying, but him as First Team coach? Mouthwatering.

I love that he said “WE have started something good…”

Still, he’ll always be a true Gooner to me.

DB10 – Our Non-Flying Dutchman! For me one of our greatest and surely always welcome back at the The Arsenal.

Wenger has already said publicly NO the him coaching at Arsenal at this time so put your willies away it ain’t going to happen!

He transcends movement. He is omnipresent.

i’ll never forget that one, probably one of the greatest goals ever…
http://www.youtube.com/watch?v=n275iW54o68

So we have a choice, carry on the way we are and keep the faith, or bring back God in a coaching capacity. Arsene, this truly would be LANS, a major boost for fans and great for the future. If you don’t do anything else during the transfer window – at least get DB10 signed up

However much of a distraction Smaug is, try reading the article properly my friend.

please come back and help arsenal as a striker coach,who ever is the striker coach and defence coach needs sacked now,

The Iceman cometh! When I think back to the pleasure I got watching Dennis in his prime, it feels my heart with joy – getting nostalgic here…

A young swedish international, Sanaa, currently plays for Ajax. He recently said in an interview that Bergkamp mostly says stuff everyone else would say, BUT when Bergkamp said, you damn well listen.

Exactly! Look at what Dalglish did for Liverpool last time round…

He bought a load of shite. Did win one trophy and get in another final though

DB’s flying issue means fuck all. It only percludes him from some CL away matches and pre-season marketing tours of the arsehole of nowehere. I think (hope) we’ll see him at the Grove in a managerial capacity in 3 or 4 years time.

And I’d like to think Denis will bring some of his old comrades in as his assistants. Fuck yes.

Did I just get a semi….No, it is a full on Chubby!

welcome back any time DB10.

According to Skysports (not very reliable?) Walcott has just signed a 3.5 yr contract.

Still waffling about his desire to play CF though

Being an Arsenal fanatic lately it’s been the worst period since I started supporting them in my early teens.. Well I was about 11 or 12 I think. When Kevin Campbell and.Z IAN WRIGHT! Were up front together and I’ve just turned 30 now so for me this has been a horrible spell but since e beat Swansea it somehow feels like we have turned a corner (i hope!) Because were finally getting some good news! Hope it continues obviously and hope that rumour on twitter it’s true bout us spending 30mil on a player.can’t really see out but stranger… Read more »

Imagine this!! Sir Dennis of the Bergkamps returning and showing Jackie.Wilshere how to do them fucking incredible curlers into the top corners from outside the box! A thing of beauty truly! One of his curlers was that perfect and the soon ok it

One of then placed curlers side footed it so perfect that when it hit the back of the net out actually spun upwards aster hitting the net unread of nestling our dropping to the ground! But God works in mysterious ways. Legend

Tut. Pissing predictive text is shit… it’s typing out “out”instead of it and aster instead of after and unread instead of instead. Heh. U get what I was conveying though I hope..cmon you.Gooners!

about 33, and possibly retiring. Why? You don’t have this weird notion that we might need him do you? He had his chance and he whored himself away.

Nope, got it from bbc. Which i imagine is where you got it.

no I’m in America and don’t watch bbc, so unfortunately you were wrong in your assumption.

the only sam is nelson
Reply to  Eric Irish gunner

I’d love it if his contract reflected his perfomances

Hey. On sky sports news (sky sources) it says… ” Theo Walcott AGREES NEW THREE-AND-A-HALF YEAR ARSENAL DEAL ON PRINCIPLE” What does the in principal part mean? He hasn’t signed but it’s pretty much agreed and FINALLY done with?

Be a troll if you want to, but for the love of god, can you please stop writing like an illiterate prick?

Harry, is that you ?

the only sam is nelson
Reply to  Voldermort

not sending my kids to hogwarts if it is

Yes please I would love to have his teach Wiltshire his subline skills to match that battling spirit he has in him.

mmm “bergkamp”….like the sound of that,
2 articles in a week, makes me tolerate this site..

too bad all them jackasses are talkin about some kid earning 100k a week. Fook that.