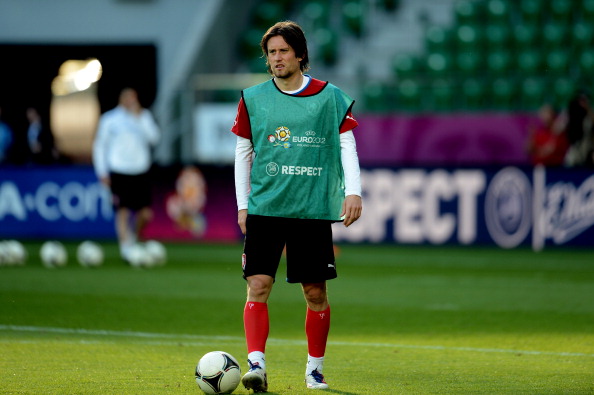 Tomas Rosicky has revealed he has Arsene Wenger’s blessing to play for the Czech Republic against Turkey in this week’s international friendly despite an understanding, agreed in the aftermath of Euro 2012, that he’d save himself for competitive fixtures given his poor injury record.

The 32-year-old midfielder has made only five appearances for the Gunners this season having undergone surgery on an Achilles problem picked up in Poland and Ukraine last summer.

However, when asked if he had permission from Arsene Wenger before travelling to Turkey, Rosicky told Czech press that the Frenchman was in favour of his participation.

“We talked about it with coach Wenger and he had nothing against me  representing the [Czech Republic] team. Thus it was resolved.

“When I returned from the Euros injured he naturally wasn’t enthusiastic. It’s logical and I can understand that.

“We resolved that I would wouldn’t risk friendly matches and would play only [World Cup] qualifiers. Now that the Turkey game has come along we’ve agreed that I lack game time and need to play.”

Admitting that he could potentially extend his domestic career by quitting international football like some of his predecessors, Rosicky stressed that when fit he’d never turn down the chance to play for his country.

“I always like to represent [my country]. Once I arrive, I’m here. Why not to play, even when I can.”

In addition to Rosicky, Arsenal have 13 further players out on international duty this week; Jack Wilshere, Theo Walcott and Alex Oxlade-Chamberlain are set to showdown with Brazil at Wembley, while Per Mertesacker and Lukas Podolski go head-to-head with Laurent Koscielny, Olivier Giroud and Bacary Sagna as Germany take on France.

In Dublin Wojciech Szczesny will keep goal for Poland against Ireland, Aaron Ramsey is likely to feature for Wales against Austria and new boys Nacho Monreal and Santi Cazorla travel to Doha for Spain’s fixture with Uruguay. Having returned to North London from a spell on loan with Bolton, Benik Afobe will join up with England’s under-21sfor their game against Sweden.

Cheers to @RYO_cleverfish for the Rosicky link.

Great! He certainly needs the game time. Let’s hope he comes back in one piece.

How does he needs the game? We have games coming thick and fast until May. I love Tomas and love watching him play when fit, the only problem he is one selfish little sod. He went this summer with the knowledge that he was not fully fit and kept playing while injured for his country. The result he is corked again for another 4/5 months. Tomas, don’t give us this shit about I love playing for my country, it is fine when you are fully fit. But, what you did in the summer when kept playing while injured is not… Read more »

Basterd fifa needs to transfer monreal to arsenal so i can buy him on UT!!!!!!!

He’s only 13 in international years

Even hleb left with wenger’s blessing. So did song. Take a hint, Tomas…

Time to wrap himself in a protective kit

You have my blessing too “gooner”.

Thanks man. That’s probably means more money for me and a seat on the barca bench “Arsene Wenger”

No, you will go to Ipswich Town or West Ham, at best.

He needs to play. I’d love to see more of him this season. He’s definitely one of our better options on the bench and always gives his all.

I really think we should use him more. On his day he can really make a difference!

I hate internationals. These have been bad as far as arsenal is considered. And what is worse, no tv coverage in my country. Fuck em

I’m most concerned with Theo, Jack and Giroud as they all may play a full game tomorrow. The others are mostly squad members although may get on at some stage. Think it’s good for Rosicky to play. We can’t wrap him up in cotton wool, then expect him to be match fit when needed.
I’m worried that one of our strikers gets crocked (anyone else think Giroud moves like he’s got a bad back already?) then we are stuck with Gervinho for the crucial games ahead.

Wasn’t Rosicky captain of the Czech team at the Euros? Would be odd if he didn’t full game. Anyway, hope he returns younger. Man must be glad Michael Jackson is dead.

I agree with you but that’s one of Arsenes faults as a manager, he’s not as big of a ruthless cunt as Ferguson

Abou has he fexcused him self not to present the blues this week? Its good for us so that he cant incure injury while we need him on Tottenham derby. Physical and strong Abou, accuracy of passes to come up.

I’m surprised Wenger didn’t gnaw his arm off for the opportunity.
Just back from injury and needs game time. Either he comes back having played, fit and raring to go for us, or the Czech manager gets the arseache of an enforced substitution in a match we don’t give a stuff about.

Exactly. Rosicky has looked sharp when he’s actually been played. This is obviously an opportunity to get some minutes without risking three points and most of all: You don’t buy players to not play them (FFS!).

Rosicky and Diaby…great players on their day but they are one of the reasons Arsenal are struggling this season and last. Wenger has made a mistake hoping these guys would stay fit when he should have let them go and bought two quality replacements.

And then what happens when they get injured?

[…] Elsewhere, Tomas Rosicky is due to play for the Czech national team with the blessing of Arsene Wenger, even though they’d agreed that friendly games would be something he’d leave behind due to his injury problems. Rosicky told the Czech press: […]

[…] Elsewhere, Tomas Rosicky is due to play for the Czech national team with the blessing of Arsene Wenger, even though they’d agreed that friendly games would be something he’d leave behind due to his injury problems. Rosicky told the Czech press: […]

why cant rosicky and santi play together in 1 team??