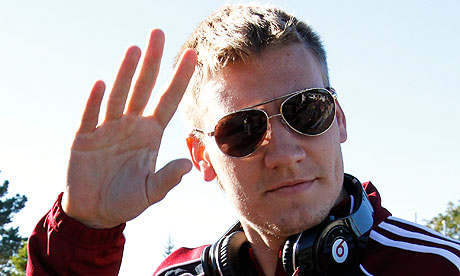 Frank Arnesen, Sporting Director of Hamburger SV, says that Nicklas Bendtner twice turned down the German club because he was looking for somewhere ‘bigger’ to play.

The striker was linked with a move to Germany in the summer of 2011 before making a deadline day loan move to Sunderland, and last season he held out until the same day before sealing an ill-fated move to Juventus.

Arnesen revealed personal contact with Bendtner in an interview with Politiken, saying, “He said no to me twice because he wanted to play in an even bigger club.”

And he urged his countryman to lower his sights, let go of his ego, and just get back to playing football on a regular basis.

“He must take a step down and choose a good club where he can get the joy of playing back and be used much more.

“He has to make sure to always be in the best shape, needs to be more humble and to think about how he’s going to get the most out of his talent.”

After his drink driving conviction, Bendtner released a statement expressing his sorrow over his behaviour.

“I am incredibly sorry for my actions,” he said. “I can truly say, that this is the worst day of my life.

“I take full responsibility for it, for what I have done, but I must go on. I cannot describe how much pain I am going through, but now I want to do all I can to come back strong.”

So true. I still think if he gets his head down and work, he might give us a good option. I don’t see it happening though.

Turned down Hamburg? His agent must have kept the nightlife quiet from him

I read he is a vegan… Dosnt like Hamburger…

Maybe horseberg would of suited him better?

Apparently we offered him to litterpool for £6M but the deal hit a snag as liverpool refused to pay less than £35M. :-/

The guys ego is bad news for the team. We don’t need that type of player unless his talent matches the size of his head!

I wish Gervinhos talent was the size of his forehead.

only thing i wonder is how, with a forehead that big, is there no orbit?

“…..needs to be more humble and to think about how he’s going to get the most out of his talent.”
Right, that’ll mean his application to be a London Borough of Islington bin man gets sent off then.

what a shame. At least Chamack has gone ‘down’ to West Ham to get game time (?) but Bendtner couldn’t think about his situation clearly, wanting glitz and glamor instead of grit and determination.

I bet his time in Italy was just one hell of a long half term holiday and occasionally going to the gym (i.e. training) and picking up hot chicks on the beaches. Nothing against people with money who party, but come on…

Us Islington council workers shouldn’t be mocked. Its one of the smartest cleanest Boroughs!

He has had a few “worst dys”, hasn’t he, though? Disgusting person. Absolutely disgusting, his ego, his behaviour, his troubles, and turning down clubs just because he feels he is special. Hopefully he won’t find a club after we finally manage to drop him out.

Shame really, we’ve had a few players with real potential just not making the most of their ability? Too much too soon? Who knows…

What a waste, a talented player, such a shame he is a gigantic bellend!

He’s waiting for Barca! he said it’s something to do with DNA

Really? And you are the father aren’t you? Yet you have no idea what your sons DNA is composed of…..

Some mothers really do have em…….

Best moment of Adebayors career…….puttin the nut on Bendtner! Shame cos i was one of the gooners who thought he could be a great striker. What a waste of talent. Just goes to prove that other factors often overlooked at the younger age groups play a major role in development and the direction at which potential can grow in a player. Hard work, dedication, willingness to listen and learn, love for the game and play for your team. Too many pre-maddona’s at youth. Thinking they made it cos they get trials. Nicklas had a oppotunity most would dream of. To… Read more »

Prima* Donnas (pronounced preema dooonnaaaaaaaaassoh in the italian accent), as Nicky B would have you corrected. He’s that kinda douche bag.

No he meant Pre-maddona’s, young players that love pop music but refuse to listen to anything post Maddona

This guy
Reply to  VictoriaConcordiaCrescit

I doubt Bendtner has knowledge of anything pre Rihanna…

We know how much pain you’re going through…it’s called a hangover. Ask bloggs, he knows all about it.

On a side note, I knew this guy in London who was a Hamburg fan. Hated him, hence I hate FC Hamburger. Or was it Frankfurt ? Can’t remember… I’m gonna hate both clubs, just to be sure.

If the many rumours are anything to go by, would podolski consider a move away? (Juventus) With the way Arsene’s been using I wouldn’t be surprised if he had second thoughts. A talented, proven player that Arsene isn’t fully exploiting.

Apparently Podolski has a slight injury that has prevented him from starting.

Fuck that guy. He doesn’t even deserve playing for Hamburg.

Basically he is just a classic narcisista and this is clouding is objectivity about himself. What I don’t get is if he thinks he is good enough then why doesn’t he think that a couple of good seasons somewhere like hamburg will get him noticed. I know he’s not good enough but he doesn’t know that so why doesn’t he want to show it. Narcissistic and lazy, he is exactly the kind of poison that arsenal doesn’t need so I hope he stays out on loan until his contract is done. AW has worked this out so I am not… Read more »

I feel sorry for Nick, I really do.

Never feel sorry for someone like Nick as all his troubles are his own fault.
If he had nuckled down at Arsenal and got on with his development he would of been part of this team now and with people who would keep him on the right path.

His delusions have been his down fall and that is down to him and the people he has surrounded himself with so as I said before keep you pity for someone who deserves it.

He’s obviously deluded. I hate to compare him to Adethew*hore, but follow me here: Ade, if I’m not mistaken scored 24 goals in 36 league games, meaning 0,6 goals per game. He has since he left Arsenal, gone to some decent clubs (Man Shitty and Real Money), where he has not done anything spectacular. Bendtner on the other hand, scored a few, missing a sitter versus Barcelona that would’ve seen us through, been caught doing stupid things and drinking. Adebayor is a terrible player, he is one of the most hated players, currently. Yet somehow Bendtner thinks that he can… Read more »

I can’t for the life of me understand why people always insist on bringing up Bendtner’s miss against Barca: 1) It wasn’t a sitter, but a bad first touch 2) We still had several minutes to hold out with 10 men who were dead tired even if Bendtner had scored 3) Forwards miss those kind of chances all the time (for example, Thierry Henry shat the bed against Barca in the final, blowing two clean chances to put us up 2-0) 4) Would we have gone on to win the Champions League that year? 5) It’s one game and doesn’t… Read more »

Techincally, he just took too long with the ball, letting in a defender, because he didn’t a) shoot, b) shield the ball.

Other clubs move quickly confirm NO interest in signing the player.

Argh, it’s always ego first with Bendtner. Why not just get your head down at Hamburg and show what you can do? He would be much better respected if he did!

Dear Niklas, Get out!

Hahaha – Harsh but true, and funny into the bargain. Just imagine all the nice chats he could have with his former best buddy at Arsenal, Adebayor!! Happy days!

His worst day of his life? Bit of a first world problem.. bar the fact everyone discrediting him.. but that wouldn’t even count on “that” day

“..he wanted to play in an even bigger club.”

Maybe they’re so small that they don’t have a Row Z and he was worried about being forced to pay for lost balls?

Hamburg is a big historical club. Given his circumstances, turning down a club like Hamburg for a “bigger” club is truly an idiotic decision. I absolutely have no soft feelings for this lad. Everything is his own doing. Truly a manchild.

Think Juve have terminated his contract after the drink driving criminal “incident”. What a pity if this clause isn’t in his Arsenal contract. Don’t know why we continue to award such lengthy, lucrative contracts hopelessly skewed in favour of the player, with no performance related or get-out clauses.
Bendtner is not just not very good, but a candidate for Least Professional Footballer as well.

Yeah i said it

Hmm. Let go of his ego. Needs to be more humble.

Hahahahaha…really? Honesty compels me to admit I really don’t think Arnesen is going to have an awful lot of luck getting that point across. Probably similar odds on that happening as winning the Lottery I would imagine, if not less!