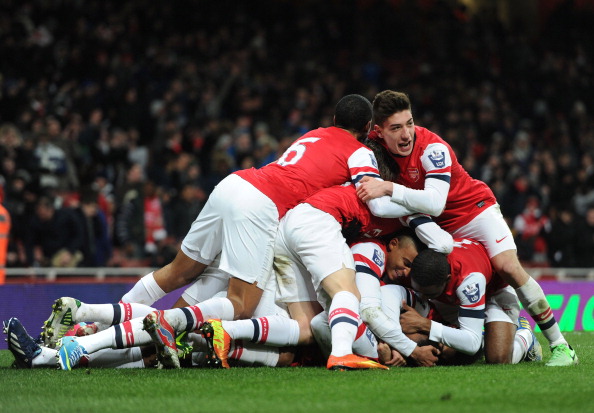 Tery Burton has praised his Arsenal under-19 side after they secured safe passage to the semi-finals of the NextGen Series with a comfortable 1-0 victory over CSKA Moscow in front of a crowd of 6,684 at the Emirates.

17-year-old Serge Gnabry, who became the club’s third youngest ever Premier League player earlier in the season in the defeat at Norwich, grabbed the winner on 56 minutes with a tidy finish following a swashbuckling run and one-two with lively right-back Hector Bellerin.

The result means the boys will travel to Italy’s Lake Como later this week for a mouth-watering last four showdown with Chelsea. Should they overcome their London rivals on Friday they’ll then play for the title in the same Stadio G. Sinigaglia on Monday against either Aston Villa or Sporting Lisbon.

Reflecting on yesterday’s impressive win Burton praised his squad for producing the goods when it mattered, telling Arsenal.com:

“I am delighted for the players because I thought they put in an excellent performance, and also delighted for the Club and supporters who turned out on a very cold night. I am sure they will have enjoyed the game.

“The most pleasing aspect was that it is a big stage to be playing at the Emirates – most of the team were playing here for the first time – and you’re not sure how they will react, but I thought they responded really well.

“That is pleasing because this is where they want to be playing week in, week out and they had to play the game rather than the occasion, and I thought they did that really well.”

Arseblog News wishes the youngsters all the best over the Easter weekend as they look to become European champions. Apparently the matches will be shown live on Eurosport.

They were really good.Should have won by a bigger margin really. Yennaris and Bellerin were excellent.

You’d have hoped for a few more spectators but 6,700 is quite a decent amount regardless. I’d have imagined tickets were relatively cheap aswell

£4. If I lived in London, I would have been there without a doubt. Dragged the whole family along too

To be honest, that’s almost half the amount that turn out to see teams like Wigan and QPR every week, I think that’s pretty impressive for an U-19 game. Shame the Semi is in Italy apparently!

More people would have been there had it not been so cold last night.

I bought a ticket but couldn’t go because I had to do a late one at work.
However, with it being on arsenal player I’m not sure I would have gone anyway, it is so damn cold.

I watched the game and was particularly impressed by Hayden, the centre-back and Gnabry. Both were excellent in their own way and have no reason to become future stars.

Um, I mean no reason not to become future stars, of course.

Three English teams there. Seems there’s good work being done in the coaching at youth level, but the problem lies more in the transition to senior level in such a tough league.

I’d love to see ‘B teams’ of the top clubs play in the football league. If England are serious about developing young talent, they should consider it. Wouldn’t these youngsters be better off playing league football with Arsenal B and training at our ground, with our coaches, as opposed to having a few months on loan at Colchester here and there?

it would ruin the lower leagues and sink at least 8 smaller clubs.

I see your point, absolutely! But England has 92 league teams and more professionalism further down. I’m not an aficionado on world football, but I can’t imagine any country in the world has as many professional clubs in a single sport.

Anyway, I understand that some may drop a few notches, but I doubt dropping one division will “sink” any well-run club.
But I’m looking at the bigger picture, providing a platform for the top level of 16-21 year old player to maximise their opportunity and potential.

One way to transition better is to have the youth teams play the exact same formation and tactics as the first team. This is what barcelona do. Every team in the Academy plays 4 3 3. Even in their debut first team match every academy player knows what to do in every situation. They know what parts of the field to press when they don’t have the ball. They know when and how to play the high line and they know when they should be charging forward. They all play the same dutch style ‘traingular passing’ game.. It’s working for… Read more »

Could you please elaborate upon dutch style “*triangular passing” game.

Sure. Johan Cruyff who was one of the proponents of Total Football in the Dutch Team went to Barcelona in 88 and then for 8 years instilled his love for the passing game into all levels of the Barcelona System. All the youth and senior teams started to play a 4 3 3 passing game. The way he thought a passing game should be played is by the players forming triangles when in possession so there are always passing options to get past/through defenders, rather than dribbling past them. Incidentally, one of the youth players who Cruyff picked out from… Read more »

Barcelona’s homegrown stars come through the B team. Of the latest bunch, Thiago, Tello and these guys don’t come straight from Youth football to senior football. That integration period serves them very well. And would shipping them away to a lower club for 3 months at a time for competitive football prove better for them than being away from Barca’s top coaches and facilities?
Because of the B team, they don’t have to decide, they get the best of both worlds all season long.

True, but there’d be nothing stopping Arsenal B from reaching League 1 or the Championship if they managed to get on the ladder. And Barca have also been able to use this to develop coaches! Guardiola got his chance due to his success with the B team. Luis Enrique too, even though he went on to coach Roma.

Can Barca ‘B’ ever qualify for La Liiga, even if they win the Second Division?

Because that’d be awkward.

Nope, they can’t. B teams aren’t allowed, even though barca and RM B teams have finished top of the 2nd division several times.

I hope it’s on Eurosport, I would love to see the next stage!

Will it be on Arsenal Player, or is that only home games?

Was a good night at the Emirates, and I genuinely believe the crowd played a part in the win, though no one could feel their toes by the end of the 90 mins. For me the stand out players were Bellerin, Angha, who added good width, pace and dribbling in attack and height in defence. Bellerin tormented CSKA’s left winger, dribbling him in our half multiple times ’til he got fed up and gave a way a reckless yellow card. Yennaris was also very good, he put in lots of energy/meaty challenges and seemed to be playing three different positions.… Read more »

In those leagues where B teams play in the 2nd tier, none of them are eligible for promotion to the top flight. Not sure if they can be demoted or not, but I do know that was a huge driving factor (stipulation) in those leagues even allowing the B teams into the 2nd/3rd divisions of league structures.

Think Villareal B got demoted cause Villareal got relegated to Segunda.

Thought the whole team played well, though Eisfeld had a poor first half, but I thought that Olssonn and yennaris in midfield were both excellent.

I am regular visitor, how are you everybody?
This article posted at this site is genuinely fastidious.

hello there and thank you for your info – I have definitely picked up something new from right here. I did however expertise several technical issues using this web site, as I experienced to reload the website a lot of times previous to I could get it to load properly. I had been wondering if your web hosting is OK? Not that I am complaining, but sluggish loading instances times will often affect your placement in google and could damage your quality score if advertising and marketing with Adwords. Anyway I’m adding this RSS to my e-mail and can look… Read more »