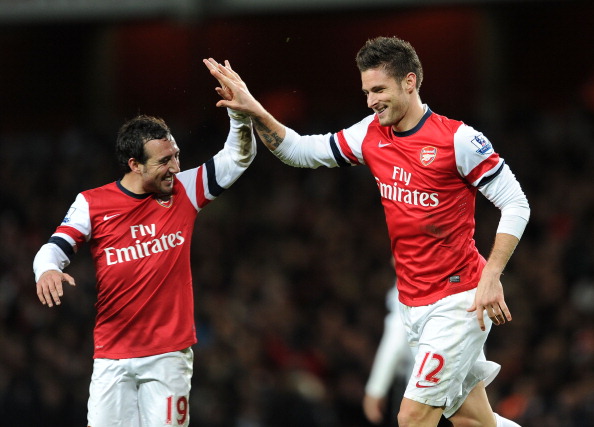 Santi Cazorla, singing from the same hymn sheet as the manager, believes that Arsenal can use Wednesday’s gritty victory in Munich as a platform for the rest of the season.

Out of Europe and the domestic cup competitions the Gunners have only the hounding down of Spurs and Chelsea to keep them occupied in the coming months as they look to seal Champions League qualification in the final ten games of the season.

“The positive we take out of the game is that we gave a good account of ourselves against one of the favourites for the Champions League, winning at their stadium,” the Spaniard told Arsenal Player after the victory in Germany.

“The team can gain momentum from this. We have to use this game as an example for the future and try to play as well as we did against Bayern.”

With Arsenal set to face Michael Laudrup’s Capital One Cup winning Swansea side for the fourth time this season, Cazorla also made clear that the Gunners need to again be on the guard against his in-form compatriot Michu.

“The Swansea squad in general is strong but, above all, Michu. I know him from when we were very young and he is a player that can make a difference. He’s scored a lot of goals.

“They are a team that will be difficult to play against, they play good football. Michael Laudrup has a philosophy that is great for the supporters to watch. We hope we can get the better of them because, for us, it’s vital to get the points.”

Always one for a piercing pep talk, Olivier Giroud added that with 30 points up for grabs there was no time to dwell on the present.

We have a big squad and we all want to win in Swansea. We need a strong mentality and the legs will run.

“This game [against Swansea] will be really important for us. We need the win and we need to continue our good game against Munich and our good form.

“There are 30 points for us to take still, so we need to trust and believe in ourselves.”

Hope Cazorla can start to rediscover his early season form for the last stretch – not really his fault, but we have been overdependent on him and he has needed a rest for quite a while in my opinion.
If he plays at his best until May we’re in with a real chance of making the top four – his form could be the difference between Wednesdays and Thursdays next season!

Gunner From Another Mother
Reply to  GOONER123

So I know this is off topic, but has anyone else noticed the “Latest” scrolling headline on here:

I think the whole team just has to find their range from now. Guys like Rosicky coming in have to do a bit better than against Bayern. I know, sounds funny to suggest that but Rosicky is an exception because he’s an exceptional footballer and can play at a level much higher than he did against Bayern.

In fairness how many times and how many different players have said the same this season. Can get a little irritating. I just hope Carzorla is right this time.

You are right, we heard the exact same words beford the NLD.

Is it if the players, or the people asking the questions that force these answers?

The Champions league is not what it used to be. In the old days you had to be the champion to gain qualification. Now second, third even fourth is good enough. Does Arsenal deserve Champions league football next season? We are after all 20 points off the pace in the league and probably won’t get much closer. We lost to second tier opposition in the FA cup and fourth tier opponents in the Capital One. We have no wins over the top three in the EPL and were unconvincing against weak opposition in our Champions league group. We then lost… Read more »

Sure it’s been another poor season by Arsenal standards, but we don’t make the rules… we just play under them. If we achieve 3rd or 4th place we deserve the right to compete for the CL next season. Simple.

Still a big ‘if’ though.

One game at a time, 3 points are essential against Swansea for starters.

Expanding the Champions league is about money not the quality of the football . No English side deserves to be in the champions league next year Don.

Wenger need to let d players know that their life depend on what they do on d pich for 90 mins, and no more permanet shirt for anybody

i think going all fergie with a boot on them might be a bit extreme, just introduce £40,000 fine system for shit play

it would be a good way to get back squillachis wages

he would have to play for that though….

I have no what you are talking about

I have no what you are talking about dude

Davo 57 what are you on about do you even support arsenal if so have you kept up with the league this season. If we finish third or fourth then we deserve to be in the UCL. Secondly the current top three are 1. man utd 2 man city 3 tottenham. Now we have beaten totenham 5-2 this season at the emirates if you remember yes against city we only registered a draw and a loss and utd we still have to play them a second time. Now lets look at this Tottenham have to play everton city and chelsea… Read more »

Olivier Giroud added that with 30 points up for grabs there was no time to dwell on the present. With humiliation in the Capital One and FA cups and now elimination from the ECL plus eight trophy less seasons little wonder Olivier is not keen for us to revisit the past. Olivier, in fact the entire squad promised us major trophy wins this season. As usual in March they now say third or fourth in the league and finishing above Spurs is the real goal for Arsenal FC. It is clear the majority of Arsenal fans are happy with no… Read more »

Well in that case, one man’s ‘excuse’ is another man’s rational analysis of reality.

And one man’s ‘fan’ is another man’s pathetic glory seeker.

I still remember the days when fans used to back their team through thick and thin and leave it to fans of other teams to have a go. I think we called it ‘support’ back then. Maybe one day you and all those like you will realise how you’ve totally missed the point. But that’s wildly optimistic. The piers morgan generation won’t ever admit they were wrong.

So because someone says the club isn’t doing what it needs to do to be successful they are not a supporter? That kind of logic is ignorant at best.

How exactly are they missing the point? We have a manger who pulls in more than any other in the premier league and it in the top 5 in all of world football but the team is in a steady decline. Please tell us how those who have spoken up about the direction of the club have missed the point.

I think it’s the sweeping generalisations that show a lack of rational thought regarding ‘their’ team that do it, if you truly care take a look at what’s actually happened. We were never going to compete when hamstrung by stadium debt, so wipe out the first 4 years from those 8 and some of the hyperbole goes down the drain. No-one excuses losses, everyone can see the mental weakness in the middle of our team but crying on the internet about it isn’t going to help, if Wenger can’t solve it then he won’t be around beyond his current contract… Read more »

Majority Arsenal fans are happy with no trophies? Loser mentality creeping in? I think the chronic misery you guys associate with following Arsenal may have driven you nuts. Just because most fans aren’t fucking downers all the time, and may want to feel a bit proud for a decent week (for now), they must have deluded themselves into thinking everything is excellent and Wenger is Jesus.

I remember during our Champions Lge final run we had the attitude of taking each game at a time… and we meant it and did it. If we do this then we will be ok. Sp*rs are wobbling so its up to us to apply the pressure and make them trip over themselves.

So important to get a win on Saturday. It is one of the harder games of our run in (which says a lot about our run in) and will put pressure on tired Spurs and Chels. Out of the three we are the most on form in the last 6 prem games (both Ars and Spurs have claimed 13 points in last 6 prem games but we have scored more and let in less than either of the other teams). This is also interesting because Spurs are on their best run of form all season – it feels like we… Read more »

Ox looks hungry and determined to do well. Also has a better workrate than the wannabe striker. I would start him at rw.

Santi should change the lw & midfield position with rosicky so that when he comes to the centre, he gets space as marking him would be a problem then.

No matter what side of the Wenger Divide you find yourself on, nothing good can come from failing to qualify for the Champions League.
This team genuinely seems to give a shit, whether they are up to it is up for debate, but I am convinced there is something that smells like team spirit.
As for Arsene, I firmly believe that the team are fully committed to him, and he to Arsenal.
Careful what you wish for and let’s give them full support these next ten games.

We have to start this run in with three points in Wales. I don’t care if we get em with a goal off Fabianski’s ass or hamstring. Just three points to keep the pressure on those ahead of us. I do see us coming even 3rd if we have as close to a perfect run in as possible. Now, just for the players to show they’re up to the fight and not just when it’s a mission impossible ala Bayern and AC Milan last season. #COYG

Play this man in the centre.
He can pull them all sort of strings.
He’s totally being wasted out wide.

While Rosicky is in good form and the only replacement is Gervinho, I’m happier with Santi out wide, it’s not like he has no pace or dribbling ability within a rigid system.

I would love it if HFB went on a scoring streak. Wenger needs to drop Theo.