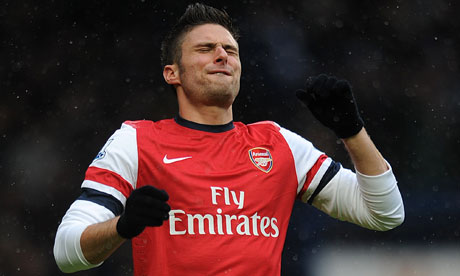 Olivier Giroud wants Arsenal to score quickly against Bayern Munich on Wednesday. Which pretty much makes him the same as the rest of us. Only we’re not the ones paid to do it.

Arsenal trail 3-1 on aggregate, and with Bayern holding three away goals the Gunners need to score at least three at the Allianz Arena to progress.

That’s assuming we don’t let any in, and the Handsome French Bloke is aware we need to improve back there, and remains vaguely optimistic.

“In football you never know,” he told Kicker magazine. “We need to believe and stay focused. But we need to correct our bad defensive behaviour as well.We need to score an early goal.”

And he believes that the Munich approach to football could mean it’s a game of many chances.

Let’s hope we do get that early goal. And that it’s a penalty and Manuel Neuer is sent off and so is Arjen Robben for excessive baldness, along with Toni Kroos for laughing at Robben.

At that point we might just have a chance.

I cannot believe I scored early against le germans!

Nah, I say score 3 goals in the last 10 mins and shock the bastards!

should unleash gervinho on wednesday..they wont see it coming

Is Gervinho just Glenn Helder in a Rick James wig?

Glen Helder is twice the player Gervinho will ever be and he was worse than poo on a stick!

Did I insult some Helder fans or poo on a stick fans.

I believe we have the quality, spirit and mental strength to make the impossible, possible, so see you tomorrow!

as long as we don’t play with the handbrake on 😉

We have top, top quality players, you never know!

Yeah, that was the Italian team that knocked out the Gooners…still trying to forget actually

They are eliminating Barca this year though, it’s hilarious.

Barca have the mental strength and super, top quality to fight back and go through…

Exactly what Arsenal do not have at the moment…

I hate all this positive vibe from the club.it’s
a bad omen..Bradford …Blackburn. we all
know what happened after some rallying
calls from players

Is Gibbs back yet?

He’s right, in football, you never know. However, in this case, we all know.

Great optimism from me, I’ve had food poisoning so that’s some sort of excuse.

Love the optimism and hope HFB finds a run of goals from Wednesday to carry on through the remainder of the season. COYG!

I want to see Theo earn his £100,000 this week, if we score in the first fifteen minutes the Germans won’t know whether to “stick or twist”, that will play right into our hands, and a late double by super Jack Wilshere announces him on the world stage……COYG….

apparently jack isn’t in the squad.

Talksport say he’s in Dubai getting some sun and recuperating from an ankle knock. Only at Arsenal could a player get injured during the week we’ve not played. Podolski on twitter mentions a slight injury too, though hopefully not enough to keep him out of the squad. Unbelievable.

First goal = A Santi Cazorla scorcher that scratches some skin off Robbens’ bald stupid head on it’s way in. ….

Am I the only one who would prefer Wenger to play the reserves? Look, I know I’m a cynical bastard, but even the most optimistic of us can barely dream of us getting three goals without reply on Wednesday. We’ve lost – let’s focus on the league, chase down the chavs and the sp*ds, and at least get us back into the CL next year. The last thing I want is a ‘heroic’ display where we still go out and knacker half of the squad before we have to play the Swans, who have a pretty decent record against us… Read more »

My thoughts exactly, but what if we did that and won 2-0? We’d be fucking kicking ourselves…

True, I guess, but I don’t think the likes of five-head and the Ox are capable of winning 2-0!

ps i want my Arseblog back, this new fancy updated site is killing my fucking lap top, takes me about a minute to scroll down 10 comments ffs.

I suspect that’s to do with your laptop. Or browser. Try Chrome, perhaps?

Since we’re talking about this, blogs, here’s some feedback: the aspect ratio of the slideshow image in the home page and the corresponding image on each article page is different in my browser (chrome, mac). On the home page, the slideshow images appear horizontally stretched. This wasn’t the case with the site’s old style, in case you’re wondering.

The images should be ok, some of them are modified for the old theme but that should iron itself out.

I think the whole previous website got a virus after an infestation of annoying little creatures, Spuds I think they call them. The old layout was so infested it had become a potential deathtrap.

Hopefully Giroud actually tucks in that first goal when he gets the chance. Dont want a player to be out here selling dreams then bottle it when it’s up to him to make the difference. Also been a while since theo did anything of note, hmmh. Oh, I know he was waiting to re-announce himself in the grandest stage of them all. The UCL. Well don’t let me stop you theo! I’m cautiously optimistic about our chances. We might score, sure but we’ll need a damn good defence to keep them out. Something we’re lacking at the present. The key… Read more »

I’ve already got my hopes too high, a 3-0 victory and the glory days are back for the mighty reds!!! Been watching Arsenal for 25 years…will i never learn???

I would personally trot out the FA Cup Team that went down to Blackburn and give them a chance at redemption through a solid performance. This tie is done and dusted and whatever happens, the Swans game on the weekend should be the priority. If Wenger fields his best side in Munich and we get the 3 pts in Wales, then no problem. But anything less than 3 pts against the Swans and the already sharp knives will be extra razor sharp for Wenger because of his team selection in Munich. He’s got it all wrong this season in terms… Read more »

Completely agree. If I see some half-hearted team of squillacis playing against Swansea, I’ll hunt down le prof myself.

Bayern have won 21, tied 3 and lost one match this season(wow!). I still hope our team will put in a great effort and really go for it, rather than playing it safe and cope with a 1 -1 result or something like that.. What i’m trying to say is that Bayern are having one of their best seasons in years, and we… well.. i’ll support Arsenal with all my heart, either way.. but being realistic, our chances are small, but they’re still there! If the team works together like they did against Milan last year, and maybe even give… Read more »

Stop beign a défender in front of goal, be sharp n score.

If you think about it, we are probably the only team in Europe which could actually pull this off. Just think about the fucking crazy results that have gone both far and against us in the last four years: 1. Four up at half time against Newcastle but draw 4-4. 2. Four down in the League Cup against Reading but we draw and then win in extra time. 3. Four-two up against Spurs in injury time but draw 4-4. 4. Four-nil down last season against AC Milan and we score 3 at home, with the Skunk missing a sitter. If… Read more »

HFB is due a hat trick

Its a love-hate thing for me, I’d like to see a win but I want the team shamefully fall and realise that “rallying” before the match and shitting in their shorts during the match will only end the wrong way

We are all suckers for punishment. It’s a damn near impossible task but everyone of us has had this thought….”ehhh stranger things have happened, it could happen, we were close in milan”.

If wigan can score 3 goals in 3 min, then sure we should be able to do it?!

I don’t know why we focus on keeping them out let’s go there and win 4-2 !!! Fuck defending lol

Reality Check: there is only 10% chance we can beat bayern on there best day. only 1% than we can beat them at allianze arena. and probably 0.1% chance that we can beat them with a 3 GD. Speculation: Just say we mange to beat them 4-1(a clean sheet with this defence when we are looking to attack is incomprehensible). Then the squad will be flying with confidence. there will be a “we can do anything” air about them. Emirates will start to fill up to full capacity even if we triple the ticket prices. We will win all the… Read more »

Arsenal to win after penalties, with Mertesacker lobbing the final pen over Neuer.

Stop mouthing and do the walk our one dimensional defensive striker,football is now out scoring

The Bould plan might actually work for this one, I can’t see Bayern shutting up shop at home, they will attack. If they were managed by Mourinho for instance they would play ten men behind the ball and just sweat it out, the crowd be damned; luckily they have a more attacking manager. Therefore, trying to score early is probably the worst thing we could do (and therefore we almost certainly will). Instead we could look to defend our two goal deficit, maintain our shape with two banks of four and let Theo and HFB fend for themselves for the… Read more »