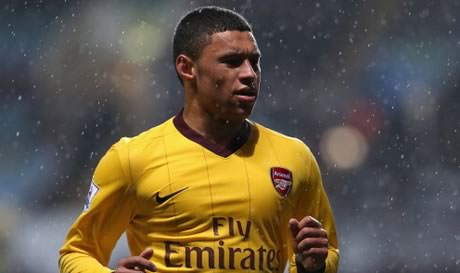 As syndromes go, second-season syndrome isn’t that bad…it’s curable for a start. That being said, Alex Oxlade-Chamberlain admits that dealing with criticism this term has been tough even though he stresses that all feedback is being used as motivation to improve on the pitch.

The England international has struggled for a regular run in the team at the Emirates in recent months having been tipped last season to be a star for both club and country.

Nonetheless, optimistic about the future the 19-year-old believes that he can cope with the hype around his potential to deliver the goods.

“It hasn’t really affected me too much, because I’ve always been focused on where I need to be, and I’m always trying to improve my game,” he told Arsenal.com.

“Sometimes it is hard to ignore, when it’s coming in the papers and your friends are telling you what people are saying. It is hard, but it’s all part and parcel of it. If you didn’t have people critiquing you, you wouldn’t find motivation.

“I always want people to be watching me and I like it when people tell me I need to be doing more. It gives me more motivation to go out and there, roll up my sleeves and prove to them that they can knock me down, but I’m going to keep going and keep proving that I can play and I can do well.”

Looking back on his first 18 months at the Emirates Chamberlain also paid tribute to the Arsenal supporters having been welcomed into their warm, comforting, bosom-heavy embrace.

“The supporters welcomed me with open arms and really did make me feel welcome. It’s nice when they take to you in a positive light.

“That support really did help me in my first season. I was a bit of an unknown quantity. People didn’t know what they were going to get from me. I was a young lad stepping up from League One into the Premier League and Champions League football. It’s a big jump and people didn’t really know if I was going to deliver.

“I think I found that in my first year, I was happy with the way it went and the fans took to me. It was almost quite exciting for them to see.”

Arseblog News fully expects the Ox to come good and thinks that, unlike last summer when he was whisked off to Euro 2012 with the media clinging to his coattails, a good rest and full pre-season will do him the world of good.

Learning from the likes of Cazorla, Podolski, Arteta and Rosicky will do him the world of good in the long-term even if it means he’s confined to the bench at the moment and while the element of surprise may have gone, the boy still has everything in his locker to be a star at the highest level. Alongside Wilshere he’s fundamental to the future of the club.

… the world of good.

I hope & expect Ox to have a much better third season with us. It would be great eventually to have the pair of Ox & Jack running our midfield.

If we get someone called Ford, we could have a midfield trio of Ox-Ford-Shire.

Who’s criticising him? Point them out to me! We all know he’s still a bit raw – he’s still wet behind the ears for fuck’s sake! He’s gonna be a big boss man midfield monster eventually. This kid is pure class. Farts rubies and shits diamonds.

He oozes class! Form is temporary but class is permanent or so they say

He is 19 years old, already promising with a shit load of years to come good (he’s on his way mind you) I don’t see where the problem is. Unless you are a pundit e.t.c who seem to have a problem with almost everything.

I had a dream that The Ox scored a hat trick against that lot and celebrated all the goals by pinching Bale’s nose! If only the dream could come true….

He’s better than Gervinho. Thumbs up if you agree.

Tom, I’ve seen your comments on a few posts and they’re all the fucking same. “Thumbs up if…” “Like if you… !!!” WHY? What possible use could you get from having random strangers on the internet click ‘like’ on some half-arsed comment on a news story that will be forgotten in about a week? If you were being clever or insightful and wanted to see if people appreciated it, I’d get why you’d care about the likes, but you keep making these posts gravid with unoriginal chatter asking people to like it and for the life of me, I still… Read more »

There’s no need to get so angry. Thumbs up if you think Lily should calm down.

But now you’re doing the same thng you were complaining about! wtf

I think that was sort of the whole point, Mike.

This isn’t fucking youtube. Shove your thumbs up you arse.

Ox is fantastic. He is similar in a way to Walcott and Gervinho in that he can take people on and provide a more direct approach to our game but the fact he has great scoring and crossing abilities too means he will probably surpass Gervinho (even Walcott?) in a few years.

One of my favourite players. I hope we can play him a bit more next season.

Seems like we almost have too many brilliant midfielders. Nice problem to have I guess..

Great to read that he’s using what is quite frankly rather unfair criticism as motivation for improvement. After all, he’s only 19 for God’s sake. He’s absolute quality and with a lot of the limelight shifting from him last season to Jack this season and no doubt the next, the pressure will be off him so he can perform as we all know he’s capable of doing. The lad’ll come good. Of that there is no doubt.

I agree he is still very young but the talent he has can’t be over looked.
Another season or two and he will show his quality.

Ox has great self awareness for a 19 year old. It will take him far in this game of ours.

Think he’ll come good, as I think Ramsey will as well (he’s well on track now), and I think along with Jack the three will boss the Arsenal midfield soon enough in the coming years. Add Gibbs, Theo and Jenks and the British Core thing we’ve got going on is a great sign for the future me thinks.

Some mentioned the word ‘beast’, i thought of the Ox’s build and instantly i thought…maybe in time he could be like a upgraded this guy ?

Scott Parker has monkey-shit on his balls

I love Ox’s attitude, dribbling, first-touch, screamers from 25-yards out, and Xavi-esque trickery against opponent-defenders.

In the near-future I hope Ox can improve his:

1) Crossing (just smash it into the 6-yard box! No more of these weak lobs that take 5-seconds to go up and down), and
2) Last-touch (after penetrating deep into the opponent final-third, often the ‘last-touch’ is too heavy and the opponent-defender clears the ball away).

Smashing it into the 6 yard box is generallywhat you don’t want to do. High or low, they are generally easy saves for the keeper.

Now, smashing it just outside the 6 yard box is a good idea. That forces the keeper to make a decision on whether to come out or not.

One of our most promising youngsters 🙂 he will go far

Youngsters usually need guidance, leadership and stability to play up to their potential. If our first team is lost, nobody should expect an inexperienced winger to work wonders.

It’s a pretty unfortunate situation right now, but when the current squad settles down, a new manager or a new assistant builds a reliable defense, we sign a few quality players Chamberlain will surely step up and prove what he can do.