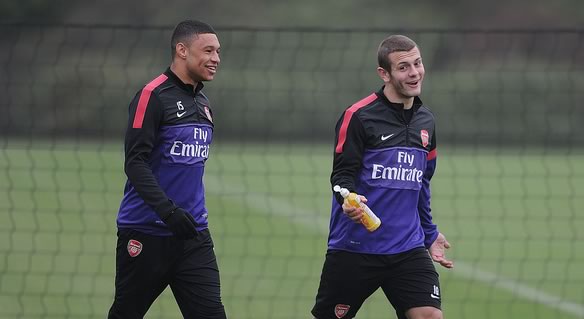 Alex Oxlade-Chamberlain has sung the praises of his Arsenal and England colleague Jack Wilshere, saying that the midfielder’s hard work and dedication on the training field are an inspiration.

Wilshere, who missed Arsenal’s wins over Bayern Munich and Swansea with what the club are calling a small injury, spent nearly a year and a half out of the game, and the Ox says Jack is doing everything possible to ensure that never happens again.

“For Jack, the injury he had, he learned a lot from that,” he told the Evening Standard. “He grew as a player and a person, to get back from that 18 months out has really shaped him, he is a dedicated professional – the preparation he puts in not to get injured in the future is amazing.

“He is the first one in training and near enough the last one out, doing extra rehab. He works so far to make sure he stays fit and it has worked well for him.”

“Since Jack has come back, he has been outstanding. He has performed to an amazing standard.”

And although Wilshere will miss England’s World Cup qualifiers this week, Oxlade-Chamberlain says it’s nice to have Arsenal teammates around when he does go on international duty.

“We are all growing up together, and in similar positions with playing for a club like Arsenal and for the international team. It is good to have all that support around you, and mates too, which is the most important thing in football, the relationships with your team-mates.

“It makes it a bit more special to be able to go away with England and be with players from your club team.

“It will stand us in good stead for our club and also for England, because the more you play with your team-mates, growing up with them, you start to know them inside out.”

Thanks to @jimvanwijkPA for the translation 😉

Lec
Reply to  BC

Oh Baby! I wish I was at the Arsenal, once more.

Alongside Jenkinson, Gibbs, Ramsey and Theo of course.

TO Gooner
Reply to  MOH

Sorry, what dialect of english are you?

This will turn out to be an important season for the Ox. Nowhere near as effective as least season and this experience will do him wonders if he has a driven mindset. If not it will be Chamakh territory, though I don’t think anyone feels that will happen. Regardless of his impact this season I’d have him in the squad any day of the week he’s a brilliant young player and you can just feel that there way, way more to come from him. Ox and Jack and Ramsey being the spine of our future midfield… exciting!!! Had he scored… Read more »

I can’t wait to see these two playing together in midfield once the Ox’s time on the wings is up.

Not sure how people here would feel, but I say wenger should convince both of them to avoid the stupid internationals like that red nosed chimp always does. I think it would be in the best interest of both the club and the players.

I wish the same, but Jack st least wouldn’t hear anything about it. The lad loves playing football, all the time, and he loves England, so for him there’s no reason to not play.

Enough with the praises and love, give us a RESULT!

Give me more RESULTS!

A little entitled, no?

We all want the team to do well but demanding success is no way to go about supporting your club.

TO Gooner
Reply to  Judgement day (once more)

Please Sir, may I have some more…results…

The Ox should stop worrying about Jack and take a look at himself. He had a decent game on Saturday but overall, he has had a very disappointing season. With such high hopes for him when he signed he has so far been a massive disappointment. Handing him a huge pay rise was foolhardy. He’s not a kid any more: next season I would like to see a considerable improvement in form – if not then maybe he should be sent out on loan.

The OX has everything he needs to succeed at Arsenal. If he can apply himself like Jack then he will be a great player and I can’t see him spending as much time on the wings as Theo has over the years because I think he has the potential to be a far more technical player. He seems to have the same mentality as Jack and understands that hardwork,devotion and the love of the game are ingredients that really good players need and of course a good old dolip of skill. I am really looking forward to seeing OX as… Read more »

I would honestly say he already is a far more technical player. He can shoot and take people on better than Theo.

It’ll be great for Arsenal if Jenks, Gibbs, Jack, Theo and Ox are around and healthy for the next 10 years or so. Awesome 🙂

More ten years of this walcot,you can despot a leopard,theo is already a finished frustrating article,next is gradual lose of pace

“More ten years of this walcot,you can despot a leopard”
That is the weirdest thing ever written…what does it mean? Ten more years of Walcott and you shit big cats?
Crazy :-#

Surely you mean “you can’t de-spot a leopard”, as being able to de-spot one would mean that the rest of what you wrote is bollocks.

Improvise! I think he means that watching theo at arsenal for the next 10 years is more tedious a job than taming a leopard. Or something.

I don’t think that trying to tame a huge fucking cat that could easily kill you would be tedious. Frustrating and dangerous maybe, but not tedious.

Jack is like the Black Knight in the Holy Grail; even if you cut his arms and legs off, he’d claim he was perfectly okay to play on.

Once Ox works on his ball distribution and retention, he will be a very complete player as he already has all the other attributes – determination, strength, pace, good control, dribbling and a fierce shot.

Jacks only 21 young and full of beans. He had a whole year off so of course he has loads of energy. Its still all new . A lot of other players are taking the flak for Arsenals failures. So far Jacks been left alone because he’s young. Eventually the heat will be turned up on him too. Fabregas also said he would stay here for ever and Cole and Cliche and Nasri and Toure and Adebayor and Van Persie and ….