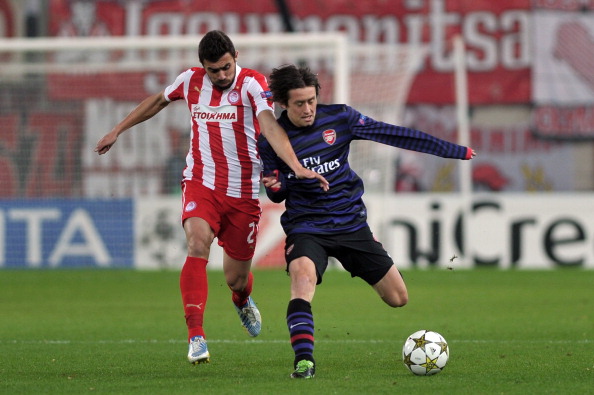 Having signed a one-year contract extension last year following an impressive run of form the Czech was tipped to be an influential squad member this season. However, as has all too often been the case since moving to London, the 32-year-old again found himself sidelined for months after picking up an injury while on international duty at Euro 2012.

Now fighting fit, the experienced midfielder insists he’s not going to think too much about being on the bench preferring instead to keep himself sharp both mentally and physically should he be needed in the last nine games.

“Naturally, I would like to play more often, that’s for sure,” Rosicky told CTK (quotes translated by Sky Sports).

“I feel very well, the results in fitness tests were the same as they were in previous seasons when I played regularly.

“When the coach picks me, I go along with all the tactical tasks and I think I have nothing to be ashamed of.

“It’s the manager’s team and I fully respect his decisions. I cannot do anything else other than train properly and wait for a chance.”

“The team has had problems so there’s no space or time to complain that someone is not playing.

“To me, personally, the most important thing is that the club which I love finishes in a position where we can compete in the Champions League.

“Everything else can be sorted out after the season, on a beach for instance!

“I must convince myself so that it doesn’t stay on my mind and doesn’t frustrate me. That wouldn’t help me or the club. Mr. Wenger tells me to be patient but, obviously, the manager of such a club is not explaining every single decision to you.”

Mature stuff from Rosicky who proved in Munich that his tremendous energy and burst of pace in the centre of the park is still as effective as ever. Given the caution surrounding Jack Wilshere’s fitness it wouldn’t be surprising if he were to feature more prominently in the final couple of months as an alternative to Santi Cazorla and Lukas Podolski.

If this guy gets one full season of fitness and form we will be a stronger team, was the original Diaby but now it seems he his finally getting over all those injuries.

For someone who has had his fair share of setbacks you have got to rate his mentality. Solid!

His little burst of pace is one of the sexiest things I’ve ever seen. I remember when we played against the Orcs at the Emirates a few seasons ago, and he went on a run, after turning a mother fucker, and bursting through their entire midfield before forcing Sorenson or whoever it was into a save. I immediately gave him pace on Fifa lol

Rosicky turning the entire Ac Milan midfield last year. Each Ac guy in that midfield was torn a new arsehole.

What a performance that was!!

IF only he had been fit from the get go… he’d be floating around Pires status by now…… Oh Well its all about now, just hope his national team don’t break him…AGAIN!!!

Rosicky is one of my favourite players in the entire team, however I think he might need to leave the club because of his injuries. We do have a strong midfield, but with to of the most interesting players being Diaby and Rosicky, I’m sad to say that I think Arsenal could benefit from dropping them both and signing new players.

Arsenal won’t benefit from selling a good, experienced and loyal player like Rosicky. He was one of the most important factor in Arsenal finishing 3rd, last season.

Eh? He was god awful in Munich, the only thing he did was give the ball away.

What game were you watching? Sure he gave the ball away a couple of times, but most of it was because Walnut ran the other way. And the way he charged upfield and put pressure on the Bayern defense and midfield, its something Arsenal doesn’t do enough but should. Not to mention he made that essential foul on Robben when he was getting away with the ball and our defenders were not able to track back in time.

What game was I watching? The game was the one which I sat through at the Allianz stadium in Munich thanks for asking. How was it on TV?

And Theo was excellent?

Those are the two things I remember being said against Bayern, both of which are wrong imo.

He gave the ball away once or twice sure but he IS an AM, he also helped accelerate our play well and the intelligent pressing was VERY useful.

Well, that, and he played the pass that unleashed Theo for our first goal as well as playing a brilliant ball to get Theo 1 on 1 with the keeper even though that was wrongly called as offisde. All in all, he seems to have done quite well in that game, eh?

I still love SuperTom, injuries or no injuries. An increasingly rare breed, a both professional, proficient and loyal footballer.

Hang on, he`s saying that he`s been tactically spot-on and productive everytime he`s picked, that he accepts for the reasons for his exclusion to remain concealed, and that he will just train hard and wait for a chance?

haha. Wait like I`ve been waiting for a front of Rosicky Cazorla Wilshere Arshavin Chamberlain and Podolski!

I hope he gets his chance soon before its to late, he’s getting old.

I damn i love that lads attitude!

I am not a big fan of Wenger’s lack of rotaion in the team. Wilshire and Arteta and Santi play every game, get over burned and then turn up ineffective performances. All three have gone through that phase. I would understand if there were not enough options available. But I mean when we have talent like TR7 rotting away on the bench and even Kos for that matter, what is the point in keeping TV5 with is below par performances in the team all season. I know he has been dropped now, but really, TV5 should have been dropped well… Read more »

I hope he gets his chance soon before its too late, he’s getting old.

I damn i love that lads attitude!

What’s the deal with Podolski? haven’t heard anything about his injury or how far away he is from being match fit

he is fit now, fortunately!

Has always been one of my favourite players. Ever since we signed him. There’s just something world class in the way he plays. Hope he breaks spurs hearts like he did for us last year.

I’m just waiting for the day he reveals that due to all the time he’s missed, he’s actually begun to age backeards footballistically, and will soon be a teenager capable of playing 12 more years. Football years, that is.

I’m not 100% on this, but I’m pretty sure Rosicky’s married.
I understand your curiosity, he has a certain puppy-like attractiveness.

“To me, personally, the most important thing is that the club which I love finishes in a position where we can compete in the Champions League.”
Awwwwwwwwww we love you too Tomas

I hope he gets a chance against some of the lesser teams like Reading so he can get full match fitness and sharpness. Don’t get me wrong, he’s been okay but to be fair to him as well, we can’t expect him to just come in out of the blue and play like he did against Milan last season. Even then he had had a run of 4-5 games in the team. Cazorla has played every single game in that position, Rosicky hasn’t really been given a chance to start with the rest of the 1st team

I love this guy, i mean how many players listen to heavy metal? This guys cool.

I hope he stays with us and I hope we win a trophy with him.

Rosicky spent too much time injured or sitting on the bench. Of course he’s happy to bide his time. Paid 70,000 quid a week to warm the bench is great. Easy money when ya can get it.