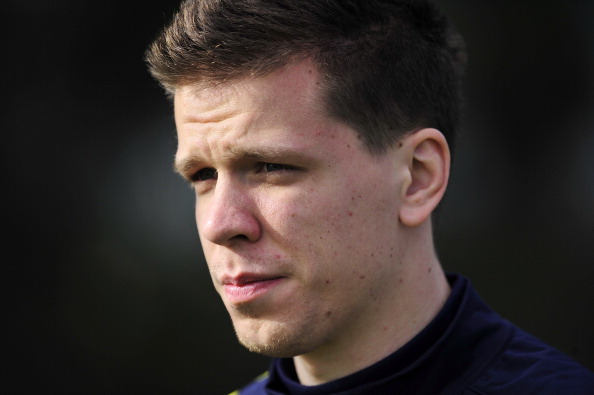 Arsene Wenger has praised Wojciech Szczesny for his response to being dropped and backed the 22-year-old keeper to have a great career despite his recent downturn in form.

Benched for the wins over Bayern Munich and Swansea the Polish international has had a busy couple of weeks, not only taken it upon himself to play down comments made by his angry father after he publicly took aim at Arsene Wenger but also confessing that his form has not been up to scratch.

Reflecting on a March of awkward headlines for his young charge, Wenger underlined that with much experience gained he’s ahead of schedule in his development.

“I haven’t spoken to him [about his dad’s anger issues] and I believe he responded very well,” Wenger told his pre-Reading press conference.

“There is a not a lot more to say. We are in a competitive world, he has nearly played 100 games for this club and at his age that is absolutely fantastic.

“The rest, we have ups and downs in our form and we have to fight against that. That’s what he said, basically.

Asked whether he might be in the market for a new keeper, a logical bit of speculation given Lukas Fabianski and Vito Mannone have both been linked with exits, the boss played down transfer talk reminding journalists that it’s not a decision to be made before the end of the season.

“A lot of people speak about that but we are not especially after anybody,” he said.

“What is important is we look at how we finish the season, how well we play and make the decisions who to buy and who to sell at the end of the season. This will be influenced by the way we play in our last nine games.”

Of course the manager backs him, he’s very talented. There’s certainly no danger of Fabianski taking the #1 of him any time soon.

He’s 22 years old and for a goalie that’s like what..infantry?. Already shown he’s capable of doing a job, to dismiss now would really be foolish of anyone. Arsene backs him because he very well knows he will be great. I Fully concur.

Not sure infantry is the word you’re looking for there.

Why not give him a rifle when the glory hunters come to town just to see what happens? We’ll see just how effective the Dutch traitor is with a bayonet through his neck.

Actually if you stay in infinity long enough you get back to zero… So… Maybe this guys a physicist.

he meant infancy. Well unless he was making a gunner reference, which is always accepted…

Agreed. His age (hopefully with time, also his quality), reminds me back when the World Cup 02 was taking place. I just turned a teenager but like everyone else I collected these stickers of football players. There was one I remember still vividly, Iker Casillas. Back then, Casillas was already representing Spain at the same age like Szczesny now with Poland.

It’s memories like these that make me admire Wenger more for giving youth a chance at Arsenal. One day they might turn into legends and you can sort of witness their journey along the way.

Szczesny has time to grow as a goalkeeper, however there are quite a few cases of established goalkeepers in top teams at his age. Just through quick browsing: -Cech was 22 when he became Chelsea’s No1 -Casillas became Real’s No1 at the age of 19 -Reina was a regular at Villareal at 20 and joined Liverpool at 23, at a time when he was actually good -Valdes emerged as Barcelona’s first keeper at 21 -Buffon was a starter at Parma, a top 4 club at the time, by the time he was 18 -Neuer established himself at Shalke at the… Read more »

I think he will be great. The hard decision I think is whether to get someone in to be a challenging #2 or to get someone with more experience to be a #1 to make szczesny fight for the #1 spot and eventually take it back…

Personally, I’d like to see szczesny in goal for the next 10 to 15 years and become an Arsenal legend. A bit of consistency is great for a team

If QPR go down, I wouldn’t mind Julio Cesar (Brazil’s number one) for a bit of competition for Szczesny!

Should we buy Samba as well? I mean, why not buy players that were part of a relegated team. We should get Scott Dann while we’re at it….

Julio Cesar is class, he had outstanding season in the Pemier League with constantly great performances he is one of the best keepers this year maybe N 1, worth taking him. Did anyone remember Juventus selling vandersar to fulham that he was not good enough anymore and his first season at fulham was excellent and ferguson bought him the next year and he was one of the best keeper for years in the league same with Cesar.

I think getting cesar would really help, hes done really well at an awful team, plus hes actually won things with inter. He can defo teach a thing or 2 to szc and maybe fab if hes still here, not so sure about vito. I’m kind torn up about if we keep both fab and szc we should send 1 on loan, maybe even abroad but in a top league cus I don’t think its good to have both here with one always on the bench, competition is all well and good, but playing 40 games a season I think… Read more »

Why not
Reply to  Dr Baptiste

I don’t think he is a bad player, but that sort of quality isn’t what we should really be looking for if you want to improve our defence. I would take Mertesacker, Koscielny and Vermaelen over Samba over a longer period of time. People calling for him to get signed up by Wenger are suffering severe short-termism in my oppinion.

Why not
Reply to  Why not

im not pointing fingers here by the way, it is just something i hear allot from friends, other fans and even pundits sometimes

There could be one or two good players even in a team fighting for relegation. That’s why we bought Poldi. If ManU only looked at proven winners, they wouldn’t have bought RVP!

This is not to say we have to buy Cesar.

Top attitude from a top player. Arsenal’s number one for years to come. Form is temporary, class is permanent.

The Dredded Wenger vote of confidence,stick a fork in him he’s done.

The truth (which Wenger never tells these days) is that Chez is at a crossroads. He can tack this knock and learn from it and become a better keeper oe he can sulk and eventually leave the club.

But either way we need a top-quality goalkeeper for next season: if the Nutty Professor doesn’t buy one then he’s a fool.