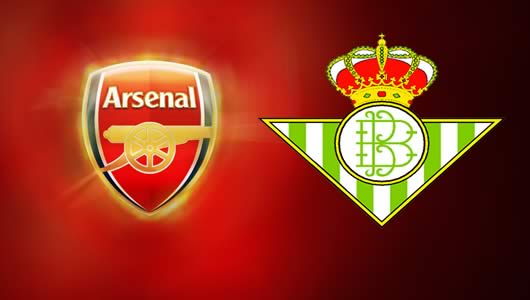 According to reports in the Spanish press, Arsenal are set to sign a ‘collaborative agreement’ with Real Betis which would see the La Liga side take a number of young Gunners on loan.

Relations between the clubs have been strengthened in recent months with Joel Campbell enjoying a successful season, and last month talks were mooted to extend that loan into next season as well.

Betis manager Pepe Mel, and club president, Miguel Guillén, will travel to London to start negotiations with the Gunners to London to discuss that issue, and although no formal agreement has been signed yet, it is suggested that Arsene Wenger will provide a list of players available to the Spanish side for the 2013-14 season.

The link-up would allow Arsenal to send young, promising players on loan to develop, rather than as a last resort move for senior players who are surplus to requirements, and candidates for next season might include Ryo Miyaichi, Thomas Eisfeld and Serge Gnabry.

I Betis a good idea!

Joel you never know. Campbell turned out okay I guess.

Joel?, I betis for real this time.

How is Campbell doing over there, stats wise?

Pretty poor statistically (2 goals and 3 assists), but as you know stats rarely tell the whole story and most people (myself included) think he’s done pretty well and is demonstrating a wide range of abilities. Not ready for Arsenal first team yet, though.

I see.. it sounds good.. hopefully he can begin to show some of the end result that we saw just before we bought him.

Cambell is one of the best player of the team , he shows us every match his skills ( He look like Iniesta with skills ) the worst thing of Cambell is that he doesn’t finish the match because his tired in the 20 minute of the second half always . Betis is the 7th so its doing very well . For football fans this Friday Betis is playing vs Sevilla and probably if you want you colud see cambell

was a condidate for best young player there, and became second (just to Isco)

Can only be a good move. I hear Betis have a few good youngsters in their ranks so might be a good scouting opportunity too. At the very least some of our youngsters will get a good run out.

Beñat Etxeberria is a name I’ve heard mentioned, though I could be wrong.

Yes , its Beñat . In Italy they say that is Pirlo with Gattuso body . He’s one of the player with more assist in the season . He is brilliant with faults and can score easily

Don’t know the playing style of Real Betis, but I assume it is similar to us?

This sounds like the deal Tottenham struck with Real Madrid, except that the thought of any Tottenham players being good enough to play for them makes me laugh ludicrously loud. Modrid’s goal against United in the CL aside, what the hell has he done?

Deal sounds interesting though, so long as Arsenal’s youth aren’t all Wellington’d.

Jordan – similar idea, except that Real Betis and Tottenham are both the junior partners in their respective agreements.

Hence why Bale will be going there in the summer.

Sounds like a good idea, Campbell’s having a decent time there and Betis are a good team with a good manager that play good football. Would give the likes of Eisfeld, Gnabry and others some experience and decent playing time in a strong league. Hopefully they’ll all come back ready for first team action

Why not
Reply to  George

not only that, it would be interesting to keep them learning together. Get some of that organic, semi-telepathic, triangle shaped madness happening.

Not to sound cynical, but getting thrashed by Real and Barça four times a year will probably build character. Wish we had a deal with Bilbao. Learning to deal with that manager each week ought to quash any oversize egos.

Impossible, because if you are not aware, player is required to be of Basque heritage in order to play for them. I doubt any of our players are.

Your gettin em confused with bilbao..

he said “Wish we had a deal with Bilbao.” I was referring to that. I can see how it could be misinterpreted, but I expected that everyone knew that Betis is not situated in Basque county.

Do you really? That’s incredible.

I honestly feel that Campbell needs to get his permit sorted out this or next season or else he will turn into a botelho/galindo/Wellington. I have such high hopes for him to be promoted into the team soon, he’s such a talent. Lets hope he can develop into the team and become the focal point of our attack with ryo, gnabry, eisfeld, ox and akpom in the next decade! Although it seems somewhat idiotic to assume that all of the above will make the grade, despite all their obvious talent. The harsh reality of professional sports…

Good move by Arsenal. Joel Campbell has progressed well at Real Betis, and this probably makes it more likely now that we have 1st choice on a youngster in their academy that most of the big clubs already have an eye on Alvaro Vadillo (Another Cristiano Ronaldo type).

Possibly Miquel going on loan there? Would be perfect for him. I rate him quite highly.

Ignasi Miquel would do well there too. He might be needed here though, if Djourou is sold and no replacement is bought in.

This creates a conflict with my affinity for their rivals, Sevilla. Good move for Arsenal, though.

Ha, it would appear so.

Hopefully means we have dibs on benat, a player who can be a great asset for our team

The guy has a rocket ship instead of a right foot

Send Bellerin,Gnabry and Eisfeld on loan there.idon’t think any of our other reserves have a realistic chance of making it here..Miquel won’t be loaned,we’ll need him to fill in for cup games/injured first teamers.

A Yank
Reply to  Apostolos

Still make it? Zelalem? Didn’t he have his debut for the kids today? He’s barely 16, right? I’m asking too many questions, aren’t I?

Gnabry scored a ridiculous goal today for the kids.

Santi Claws
Reply to  A Yank

[…] According to Arseblog.com, possible loan candidates for next season could include; Ryo Miyaichi, Thomas Eisfeld and Serge Gnabry. […]

Maybe as a steward.

Boss deal this! If number of our players go as suggested, they’ll obviously earn experience at the top level but on top of that, they’ll be playin together so if they do sick, they can come back and fit right in our team! I say get this deal sorted ASAP!

Betis will only be for South American players to earn their residency status. I feel that Campbell should return to Arsenal to play our way as well as to adapt to BPL. He could do well with a spell in an English club. Only then would we know whether he could make the cut or needs time.

Spanish link-up mooted and other stuff | Arseblog … an Arsenal blog

[…] reports in Spain suggest that Arsenal could be in the process of arranging a formal link with Real Betis, which would allow the Spanish club to take their pick of young talent at the club to take on loan. […]

I remember reading that Arsenal will not loan Ryo to a club outside England so he can qualify as a HG player.