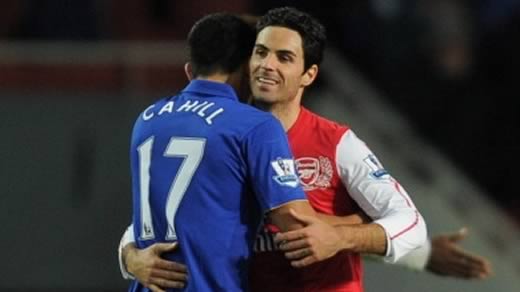 Mikel Arteta has warned his Arsenal teammates not to expect an easy game against Everton tonight, heaping praise on his former team as they look for three points in the race for a Champions League spot.

The visitors arrive in a good run of form, and it’s no surprise to a man who spent 6 seasons at Goodison Park.

“They just never give up,” he told the official matchday programme. “I know the way David Moyes will be preparing them for the next few games, because they still have the chance to qualify for the Champions League and that would be massive for them.

“They’ve been a very good team. They sold Joleon Lescott and myself in recent years and maybe people thought they’d have a problem, but they’ve been able to keep Maourane Fellaini, Leighton Baines and Phil Jagielka – all very important players for the team – and also have guys like Steven Pienaar, Kevin Mirallas, and Nikica Jelavic.

“It’s a strong squad and some of them have been playing together for a long time together. They have experience of these situations and it will be a difficult game.”

The Spanish midfielder also spoke about stepping into the breach as captain in the absence of Thomas Vermaelen.

“Being captain of this football club gives you more responsibility, and it’s a big privilege. It’s something very serious, just look at the captains this club has had in the past.

“I always try to influence my teammates in a positive way, making we sure all play together and for each other. When we put our talent to the benefit of the team we have a great chance to win games, and that’s what I tell our players all the time.

“When the group does well, the benefits will come for everyone, and when we win we’ll all be happier than when we draw or lose.”

It remains to be seen if he’ll wear the armband tonight, but either way let’s hope he’s happiest at the final whistle.

Read the full interview with Mikel Arteta in the programme, which is also available on iPad right now.

One game isn’t always reflective of a team’s character.

Didn’t they come back from 4-2 down against United too?

If we’re going to pick holes in comments Gunsen Gunner is correct,Arteta said Everton never give when clearly they do as my fellow gunner pointed out.

It must be a fine line between ‘giving up’ and ‘playing badly’.

You know I’m right Andrew,your just getting bitchy!ps Everton are shit and if we can’t beat a team with Darren Gibson in it we don’t deserve champions league football.coyg.

You should remember to think twice before posting (it’s twenty times for mongs) and thrice before throwing insults. arseblog’s point is smart and valid, and you ain’t getting it.

Back to the jungle with you Africa unite.

TO Gooner
Reply to  Johnnnycakes

For that matter Arsenal never give up either, even though we’ve had our fair share of beatings.

Whats with all the aggression? Just beacuause a few didn’t agree with your points, you feel compelled to insult others on nothing that supports ypur argument? If you think your point is so true why do need others to agree with you? Why do you need to resort to insults, no one will respect and listen to you now.

I cannot understand how this guy is not our permanent captain. Such class

TBH, TV5 was equally assured in press conferences too (if that is a metric for judging captains).

Too much is being said about the Verminator’s credentials as captain… Wasn’t he the Captain of Ajax for a couple of years before we signed him??? I’m not chiding you or anything, but I’m seeing too many people question Verma’s captaincy just because he is going through a bad patch and I thought I’d put forth my two cents… I should probably have said this as a seperate comment instead of a reply… Oh well…

It’s so refreshing to see him talk about his past club, one that has undoubtably been a formative influence on his career with such respect. I do hope the travelling Everton supporters treat him with the case decorum.

This is a tough game to win but if we play as well as we can, I can’t see us getting anything less than a draw at the very least. With a team like Everton, I think a point would be good enough.

However, in the form of our lives, we should be able to take all three. COYG!

Balls to that. Nothing less than a win would do.

…. Mark my words: WE ARE GONNA WIN THIS… And Mikel, Arsenal never give up either.. not so long ago we were the most scorer team on the last minutes of the game… Don’t know how that statistics go now… Come on Gunners!!!!!

Yes, i believe we have the necessary mental spirit and are up for the fight. We showed this against Norwich.

Yup marked your words…. and we drew. Lol

why hes not a brazillian at all !

id say he toffie should give us a good game tonite , IMO we didndt have the best of games aginst norwich but we kept pressing and in the end we got the rusult and the 3 points we deserved!
Lets hope we start with all guns blazing ! were now in the driving seat , its in our hands now and i for one will be delighed if we keep the rival london clubs at bay ! Lets be fuckin havin ya

What do you think of exclamation marks?

Must be German with all the Exclamation points

But I get the sentiment, welldone!

Any Arsenal team should be capable of beating Everton, despite how well they’ve done this season. We’re in good form, firing on all cylinders so come on boys let’s go out there and cement our place in the top 4!

This game just reminds me so much of the game against Newcastle last season….so I’m backing the Kos for a last minute winner since television won’t be playing

Mirallas is going to be a problem. Anichebe too, maybe more so.

He sure as sugar won’t be getting anything out of Monreal. If he switches wings then he may cause issues with Sagna, but I actually hope Jenkinson starts today.

Again, the last sentence was a joke. I have plainned for Mirallas and I know who will be starting because I am the manager (for sixteen years).

Any of u guys know a web where they stream the game live but for free without subscribe or sign anything??? That’s fricking annoying…. Thoughts??

premier-league-live
(I don’t know if it still works any more, I used it a long while ago.)

When adverts pop up, wait for a grey cross to appear, and click on it (it may be hard to spot sometimes).

I hope you also support the club by buying merchandise etc…

i use Wiziwig.It always works for me.At most i have to pick 3 different links during one game if it switches off.

People say that Everton have been in good form, which they have, but consider these factors:

>So have we.
>Everton’s good form has come from home games.
>Arsenal’s has come from both home and away games over a longer period of time.
>They have visited the Emirates six times, and have only ever taken two points.
>We are better than them.

I believe we have the quality, spirit and mental strength, and we are also up for the fight, so see you tonight.