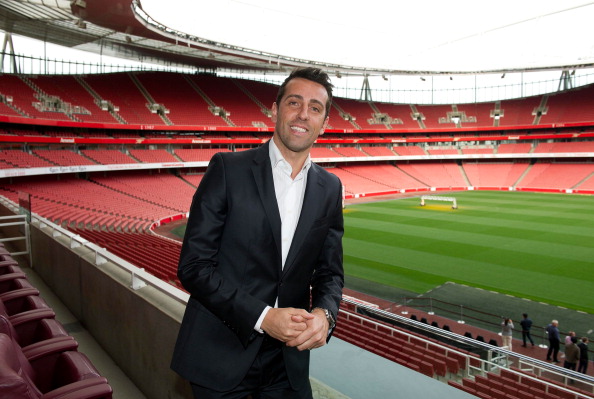 He may have walked away from the club on a free back in 2005 but Edu’s relationship with Arsenal remains very strong.

Now the Director of Football at Brazilian giants Corinthians, the 34-year-old was invited back to London this week to chat with the Gunners’ hierarchy where, amongst other things, he discussed the quality of the pitch at the Emirates and how the stadium operates on match days.

According to Brazilian publication Lance, the purpose of the former midfielder’s N5 jaunt was to fact find ahead of the opening of the new Arena Corinthians stadium which has been selected as one of the venues for the World Cup in 2014.

It’s believed that in addition to chatting manicured lawns, changing room size and Andre Santos’ love of rainbows, Edu was particularly interested in learning how far his club can push acceptable financial boundaries when pricing up fish and chips. Apparently, he’s also bagged his own groundsman a future meeting with the team at Arsenal.

“The affection that Arsenal showed me to invite me, and then to help me was huge,” Edu is quoted as saying by Sport Witness.

“I am very grateful for the opportunity for this information to use in the football management of the Arena Corinthians.”

One of the reasons why Corinthians fans may have to exchange gold bullion for pre-game grub is down to an interest in signing Carlos Tevez.

Edu is believed to have called in on the Argentine striker while at the Soccerex conference in Manchester last week and will likely need all the cash he can get his hands on if he’s to persuade the City board to give up their once-in-a-lifetime chance of seeing Tevez picking up rubbish on the streets of Manchester as part of his community service.

That got me as well wow, thought he was a lot closer to 40 than that! I agree its a shame we didn’t get a couple more years out of him too.

One of the guest writers on 7amkickoff did a great piece on him a couple of weeks ago. It’s amazing that we let him go at his age in 2005.
Playing 2nd fiddle to two World Cup winners is no mean feat. In my opinion we should have ke

there wasn’t much to be done. he was at his prime and wanted first team action but he was not going to start ahead of those guys.

One of the guest writers on 7amkickoff did a great piece on him a couple of weeks ago. It’s amazing that we let him go at his age in 2005.
Playing 2nd fiddle to two World Cup winners is no mean feat. In my opinion we should have kept him for another 2-3 years. He was very underrated.

Got a link on that article?

Always came across as a stand up guy, and I will forever remember that goal he scored against Celta Vigo

That goal…a great player for us.Shame he left us,we could have done with him a bit longer.

Very underrated player but will surely go down as cult legend. Looks like Joey from friends in the picture!!

And a bit like Doni ‘smiley’ Colombo from cosa nostra…

If u go back to our last double campaign it was only afta he started partnering PV4 in the middle that we went on our amazing win streak. Had a delightful tempo to his passing and always played the smart ose. Unlucky to be ousted after our double by his unknown compatriot.

I think he would of stayed had he known vieira was off, good player

Regarding his age,I see Freddie only turned 36 today….we didn’t get enough years outta these lads!

Freddie was passed his best by the time he left.
A good player still but it was the right time with him.
I always thought Edu should’ve been kept on longer. Silvinho too. Although I believe his passport turned out to be one knocked together with sticky back plastic and a crayon drawing of his face.

Not an all-star but a solid midfield option, with an occasional goal in him. A samba Ray Parlour, if you will.

I remember one game where he scored an own goal, and then levelled the game with a freekick quickly after. You could see how much that meant to him!

Why is joey from friends at the emirates?

Also, this headline made me fear that the lad had resorted to becoming a drugs mule after football faded away.

I don’t know if I’m permitted to share this here, but here’s that brilliant piece on him from 7amkickoff:

Always had a soft spot for Edu

Anyone remember that rumour that we’d signed the wrong Edu?

What the fuck was up with that?

34 years old huh? Was there some sort of passport problem when he came to Arsenal?Was there also some issues with hes age not be what it was in a passport. Though those were wild years so I might mixed it up with someone else..

I think it was Sylvinho. Also Danilevicius had some problem like that too, but he was totally shit anyway.

oh, actually, I think you’re right. He had a fake Portuguese passport when he arrived. My bad.

He was one where the phrase ‘Twinkle Toes’ really applied. Rarely gave the ball away and won it back well. A bargain buy, really liked him

He was a great squad player, always did a solid job when called upon, but sadly always played second fddle to the big names.

Leaves me with an ultra special soft spot for him 🙂

Without him, I really don’t think would have gone through ’03-’04 the way we did.
Really thought he was a great player, but why oh why did he leave us on a Bosman?