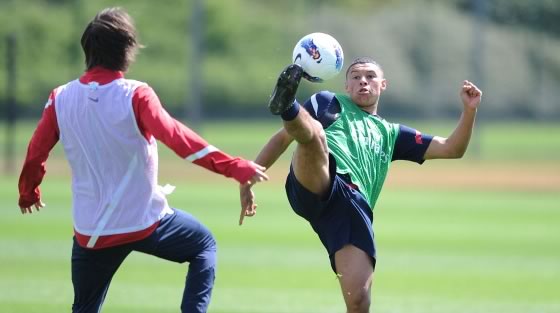 Both Thomas Vermaelen and Alex Oxlade-Chamberlain have heaped praise on Tomas Rosicky, with the former Southampton man admitting he learns a lot from the Czech international.

Although Rosicky is a doubt for tomorrow’s game against Norwich, his two goal salvo against West Brom won the points for Arsenal and the Ox says, “He can turn and drive and shoot, he is technically brilliant and his work rate is fantastic. He is a magnificent player.

“The way he plays the game so positively, he is always looking to go forward and drive at defences. He takes risks and makes things happen. He is also one of the nicest guys I know. You can have a good laugh and joke with him, but when it comes to football he is always trying to help me.

“With his experience he is always giving me advice, but in a nice way, and helps to bring you along and be a good professional. He is a great lad to have in the dressing room.”

Which shows that even if his influence on the pitch isn’t as great as we would like because of the injuries, he can still contribute to players who will be the future of the club.

“Tomas has always been a great player for us,” he said. “He has been unlucky with injuries this season but his technical qualities are amazing.

“He’s a popular guy around the Club, he’s been here for a long time, he knows everyone and we all get on with him because he is really relaxed. On the pitch he is reliable, always available to receive the ball and his technique is almost perfect.”

Fingers crossed he makes it for tomorrow, and scores another couple.

That’s my Twin. Rozza is the best there’s.

Arseblog, ‘tomorrow’s match against Southampton’??
Have i gone. Back in time?

Yes, it certainly wasn’t a mistake which we’ve now fixed or anything

Let’s keep this group of players, at least 95% of them. I see great things ahead.

& I hope Rosicky would play at Arsenal till he retired. Love that guy.

and his football age i only 29 remember :p

29? I was at his Bar Mitzvah last week

One more injury and he’s going to have to climb back in the womb.

But when I ask Ox to learn from Rosicky in Football Manager 13, he shrugs his shoulder and leaves. These footballers…

Always has been my fav player @ arsenal…lil’ mozart ya beauty!!!

Mine is diaby but I dont like to talk about it.

In his element, Diaby’s a beast of a player too.

We should get Isco to learn under him as well. Quality little player.

“…for tomorrow’s game against Southampton..”?

Give him a break, it is obviously a typo due to his hand injury.

Blogs, could we get a special news post about Ade’s missed penalty yesterday? I don’t know about anyone else but his face was priceless. I may have been smiling for the next 12 hours

One Arsenal
Reply to  adebayor

By far my fav gooner. Whenever he gets going I just light up coz I know he’s gonna do something cool or lead to something cool. Were it to be an injury free career for rosicky then would he would be one of the top CAMS in world right now…..

This is why it’s worth keeping players above 30 in the team. We should have done the same with our golden era, where it was possible.