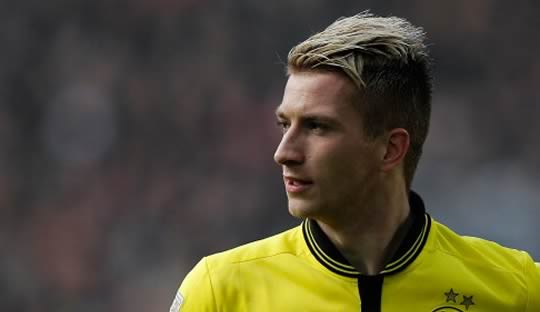 In a Guardian interview with @DonaldMcRae he also spoke about how he’d modeled his game on former Dortmund star, and Arsenal player, Tomas Rosicky.

“A perfect player,”  he said of Wilshere. “Boy, he’s fucking good. He’s so quick and skilful with the ball at his feet.”

And having grown up at Dortmund, Reus cites Tomas Rosicky as his inspiration and idol, claiming that injuries have robbed him, and Arsenal, of a truly great player.

“My idol was always Tomas Rosicky,” he said. “He used to be phenomenal. He had such a good eye for an opening and knew where his team-mates were, and he was so quick.

“Rosicky had great technique and was so intelligent and mature even though he was still young at Dortmund. I copied everything about him – right down to his sweatbands.

“He was so unlucky he had bad injuries at Arsenal because, otherwise, he would be one of the world’s best players.”

With Arsene Wenger looking more and more at Germany for his transfer business, and with the Gunners long linked with both Reus and teammate Mario Götze, perhaps he could play alongside Rosicky and see first hand just how good Jack is.

Hey, it costs nothing to dream.

I wouldn’t mind seeing that BVB side stick together actually.

it would be a triumph of club and fan connection over money.

and would be great to see another strong side balancing out the dominance of madrid, barca and munich.

I have to say I completely agree. The German league is run so well, no club is allowed to go into debt, the television rights are distributed more to the teams that finished lower down the league, and they have the best attendence in europe would be nice to see players show a bit of loyalty and as you said a connection that is more than just with money with the club! It’s exactly what we are striving for with Arsenal but tougher here with the kinds of teams we are competing with!

There is much to admire about the Bundesliga but the point about television revenue distribution simply is not true. The Premier League has by far the most equal distribution of TV money of all the Big 5 leagues.

But Allen didn’t say anything about “equal distribution”, he talked about teams lower down the league getting more money, which makes sense, since the ones at the top usually get lots from advertising and merchandising.

Arsenal could win the Budesliga title.

Reus is the real deal, would love to see him in red and white, but can’t imagine how that would happen unfortunately.

I think Arsenal narrowly missed out on him when he joined BVB from Monchengladbach. Decent player and lad

Dortmund stadium plagued by rabidly amorous frogs forcing the pitch to be unplayable for the unforeseeable future. Players are forced to ply their trade elsewhere till frogs are cleared.

If only Rosicky hadn’t had all those injuries… Out of him and Diaby, Diaby’s has had more appearances for Arsenal, both having joined in 2006.

Yea but Rosicky is a class player, technically gifted, Diaby is not.

Spot on by Reus. Rosicky is my favourite player at the club, his technique and ball control is amazing. He runs for every ball, gives it all each time he’s given a chance. It’s such a loss that he hasn’t stayed fit, because, had he played regularly, I have no doubt in him being one of the best midfielder in the wolrd.

Then he would be a Barcelona by now! Ahaha… ah… too soon?

Rosicky’s pressing is also excellent. He’s my fav, has been despite injury.

Yeah I adore him too. I just can’t believe how little he’s actually played after all these years, really does make me sad. Hopefully he’s still got a few more years left in the tank.

Fucking NA$RI!
Gaahh!!!!. What was this ugly lady on about? and just when I was starting to forget he ever existed. Cunt!

Genuinely not worth getting stressed about

When someone; no matter how insignificant they are talks shit about my club. I am not okay with it.

I think Arsenal can survive the chinless ones little strop. Of course he would say that Kroenke lent on Wenger, otherwise he would have to admit that his talent is not even close to being worth £24 million.

What did Nasri have to do with this article?

I like how Dortmund do it in the Bundesliga. In many ways they make me think of that league’s Arsenal (before the billionaire playgrounders came into the PL). Great unit work and good focus on bringing forward the youth. A lot of potential in their team, there’s at least 4 players that I’d love to see in an Arsenal shirt.

Brilliant! would have been better if he said fucking excellent

Give it a year

My favourite Arsenal player by a country mile is TOMAS ROSICKY 7.

Injury robbed us all of his were to be magnificient displays over the years. I hope the rosicky co-efficient works, I would like to see him continue his career, with Arsenal ofcourse or otherwise. I’m still happy.

The quality is still there which many of us doubted before his recreation in spurs 5-2 last season.Just remember when he was bought before the fifa or euro cup everyone knew what a bargain he was, and he is to combine so well with hleb.And one of the guys in that team who wasnt afraid to shoot from outside the box.His work rate is what seperates him from Arshavin.

The home screen on my phone is the picture of him celebrating after his goal last year against Sp*rs- you could see how much it meant to him. Love Love Love Rosicky!

Cant help but admire Borussia Dortmund. They’re similar to Arsenal in many ways.

Rosicky is a different class of footballer, when him and cazorla combine its a joy to watch. We’ve got a lot of talent in that midfield department but as far as players who actively force us to play the kind of pass and move game we saw against reading it really is mostly those two.

I agree everything about Rosicky, except I’d change the ‘Was’ and ‘had’ to ‘is’ and ‘has’.

I think he is still phenomenal, still has an eye for an opening, still is quick, and still HAS great technique.

He is still Super Tom Rosicky for me, and always will be!

Reus might be sweet-talking his way into the Emirates. Won’t mind if he brings Gotze & Lewandowski with him…

Why would he want to do that?
a)basically every team would want to have him on the books, so he doesn’t need to sweet talk anywhere, let alone to Arsenal given where we are now
b)he has a better thing going with Dortmund than we have currently
let’s not go all scouser here please with thinking we are still the most desired place to be at for every footballer out there

TO Gooner
Reply to  Chair

Bring me back home.

I believe we’d be in Dortmund’s position right now had the Premier League used the Bundesliga structure.

Such a shame about his injury ravaged time here at Arsenal. But he was and will be a class player. I can still remember how excited I was when he signed for us back in 2006 before the World Cup. That was before he tore a new one against US in the World Cup. Bloody hell was he good!

I would like to retire at Arsenal. This decision has nothing to do with Arteta, Sagna or Podolski’s wives.

No compromise…. what about Cazorla’s and Rosicky’s??

I just mentioned Sagna cos he’ll tackle the living shit out of me if i cross his path.

fuck off you cunt

3 thumbs down!?! come on where is your sense of humour?

Dortmund is the team I love in the Bundesliga(this is the team that Rosicky came from and he’s my favorite player). Reus and Gotze do really play well….it’s a joy to watch them play; no wonder they are on the National team; if they join Arsenal, wow it will be a BIG BUMP come on guys join us!!!

Jack, götze and reus? my hands are all sweaty, better get back to reality.

Seeing clips of Rosicky at Dortmund. Arsenal have not seen the half of what this guy is capable of. Damn you injuries!

since AW started playing him through the middle he’s shown glimpses of it… just a shame the first couple of years AW was adamant to play him on the left to replace Pires whilst there also other players keen on the central midfield – Cesc, Hleb, Flamini and later Song, Nasri

Arsene does that to new signings to make them play everywhere, so they get used to his philosophy. Obviously, back then anyway, the Premier League was a step-up from the Bundesliga.

Rosicky’s not liking the past tense.

Wenger should name Klopp as his successor.

I read about the rumours about arsenal planning the moves for Lewandowski,Gotze and Bender,but actually I’m interested in Reus. Not because he said good things about Wilshere and Rosicky , but because he’s really good.He can score,run and very determine. I’m dreaming ? maybe not, but Reus could also dreaming to play alongside Rosicky.

oh and 1 more thing about rosicky that seems to be overlooked – his perfectly timed sliding tackles!

This is just cruel. Reus happens to be at the top of my shopping list

Top lad Marco Reus feel free to come and play alongside Jack in the future.

Please be specific. Write: “Come and play alongside Jack in the future at Arsenal”. Because, you know. That’s not even funny.

OK, maybe some of u won’t approve this But in my humble opinion Goetze is way better than Reus and can play alongside Wilshere and Cazorla…. For the striker position I wouldn’t go for another tall and strong But without pace like Lewandowski, I’ll go for a smaller, strong and quick player like one of the Real Madrid strikers (they will get rid of one this summer ) …. And please we need a holding midfielder, that Celtic guy could work….. Meanwhile let’s win our games with the patchy squad we have now…. Go Gunners!

Love Marko Reus but he’s only juuusst joined Dortmund is joining players he played with @ youth level at the Dortmund academy.

Good article with the exception of his insistence on using the past tense when discussing Rosicky.

Those pinpoint accurate long passes that Rosicky does with the outside of his right boot. Worth the price of admission by itself.

I love how after a loss, draw e.t.c he crouches in the middle of the pitch looking all dejected and stuff. That’s the guy right there, his small cheeky beard also endears me to him more. What a guy.

And what Rosicky’s slide tackling huh? One of the best at grafting

I like watching Dortmund’s games. Football is just a bonus, but there is something magical about a huge group of people having a jolly good time. Actually its not just a Dortmund thing, its true for most of Bundesliga stadiums I saw on TV. Them Germans know how to enjoy their football..

When the going gets tough, Rosicky gets going.

I think this is one of the most significant information for me. And i am glad reading your article. But should remark on some general things, The website style is perfect, the articles is really excellent : D. Good job, cheers