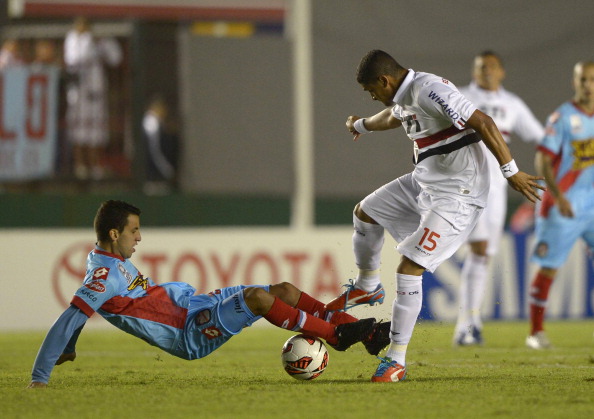 According to a report in the Brazilian media, Sao Paulo now have no interest in keeping Denilson on a permanent basis once his loan ends at the end of June meaning Arsenal will have to source another buyer if they are to offload the midfielder this summer.

Despite earning regular game time, estadao.com.br claim that a recent drop in form (comedy own goal anyone?) and an untimely and unseemly spat with a fan via social media will cost Denilson the chance to strut his stuff at the Morumbi in the long-term.

The 25-year-old initially returned to his former club on a temporary basis ahead of the 2011/12 season before being granted an extension for the length of this term after impressing during last year’s Sao Paulo’s Copa Sudamerica triumph.

“I believe we’ll reach an agreement with Arsenal. We have heard from Denilson that he doesn’t want to return to England, that he wants to stay here with us.

“I think our relations with Arsenal will help that to happen.”

The player himself also talked about the potential deal in February claiming that talks had already begun.

“We are talking slowly. I have a quiet mind as I feel the confidence of São Paulo in me. I believe that we can get it right, but I prefer to focus on the matches.

“Lets leave the contract to my lawyer to resolve with São Paulo.”

Alas, highlighting three main reasons for not pushing forward with the deal, Estadao’s report first claims the player has lost the trust of the management due to a lack of effort before citing Arsenal’s £7 million asking price and alternative midfield options as key factors in Sao Paulo’s change of tack.

The article maintains that Sao Paulo, presumably out of respect for the player, won’t speak publicly of their desire to return Denilson to North London until his contract ends on 30 June.

Amazingly, having signed a new deal at Arsenal in September 2009, our crab-like DM still has another year left on his contract at the Emirates. He’s not played for us since May 2011 but with one last chance to get a fee for him this summer Arseblog News suggests Ivan Gazidis and Dick Law start sending YouTube links and highlight DVDs to as many clubs as possible…

It’s either that or we accept he’s going to be paraded as Diaby’s replacement.

“It’s either that or we accept he’s going to be paraded as Diaby’s replacement.”

An “internal solution”? Well Arsenal do need proven “winners” like Denil.. no can’t finish that sentence. Isn’t there a Russian team with more money then sense we can flog him too?

To be fair he can’t do a bad job replacing Diaby , Who I think is a top player but with his injury record ,Any player is good enough to replace him

Give it a rest fool.

We can always sell him to QPR.

Yippee same same same old cue bendntner to walk in with him diaby him chamakh djroyu will be fighting it out for squad gear next season as Ivan will be saving money on track suits but paying these millions!

Please dont lump Djourou with the rest of this bunch

I believe he should get another chance in our midfield.

Oh wait. April’s fool is over.

If he can’t do a job good enough in the brazillian league I don’t see him improving our team in any way. That should be the criteria. We have Le coq thankyou.

After seeing him play recently I think he should be on left side………..of the bench…………of f.c pirates………..in South Africa.

the chosen one
Reply to  Herold goon

Dont disrespect Pirates like that. Up the bucs!!! Viva South Africa. The standard of our league is improving rapidly thank you very much

Great news. Denilson on his way back. With Santos returning our defence will be rock solid. Now that Vella , Bendtner Chamak and Park are also returning next season looks very positive. Factor in Diaby’s long term injury and Wilshire, Rosicky and Gibb’s recurring injuries we look strong for the Premiership and ECL double next season.

Vela was sold, not loaned. But, apparently, we do have a buy-back clause.

and Vela is quoted as saying he’d rather cut his legs off than come back!

I agree with him. I’d rather he had his legs cut off than come back.

Hell naaaaaawwwwwww.Bring back Vela instead.

Oh boy, our summer business is allready done and dusted. Bendtner AND denilson to return, and with chamakh to return from the hammers (which I assume he will….) we are all settled for settled for the next season…….

So Denilson, Squillaci, Bendtner, Santos, Chamakh, Chuyoung and Arshavin all need to be shipped off this summer, or are any of their contracts up?

Mine will be up this summer *sobs*

squid and arshavin won’t be back next year

Squillaci, Chamakh and Arshavin’s contracts are up. TGSTL has a year so does Denilson. Denilson may see his contract terminated along with Park. The great Dane may be picked up by someone. I think.

I thought Chamakh still has one year remaining on his contract.

The only ones interested in picking up Nik Bendtner are the Old Bill in Denmark- with or without alcohol and driving license!!

I hope he never comes back to Arsenal, he was never much good and as a replacement for Diaby you have to be joking, we have enough dead wood that we can’t get rid off let alone bring another one back and if Wenger has any sense he won’t consider the move.

or alternatively, they should prepare the “Michael Owen Broucher”- that seemed to prolong Owen’s career a good few years and the Arseblog version for Adebayor convinced City to part with 20M+.

A tried and tested method that yields results!!!!!

Yet another example – as if one were needed – of Wenger’s insane contract policy, which is based on the assumption that if you pay Pires wages you get Pires performances !

Wenger too has one year left on his contract and there’d be a certain justice to it, if he Bendtner and Denielson all departed together.

Funny enough Bendtner gets picked up nowadays. After a night out with friends his mum/siz/missus come for him.

Niklas bendtner is without a license.

Please tell me that the original report this came from was published yesterday, and that they celebrate April Fools Day in Brazil too…?

We do celebrate April’s Fools. Sadly, being a Sao Paulo supporter as well as a Gunner, I can confirm the news…

If true, I find it amazing that we have the audacity to ask for 7m for him. Everyone in the world knows he’s not worth nearly that much. Honestly, we should offer him for free – or a token fee of 1m at best – just to avoid having him come back.

I doubt we’re looking for anywhere near that much

It does sound rather unbelievable.

It is about the fee and asking salary. São Paulo should be keen to keep him as he has been a regular starter for them. I believe the management of the Brazilian side are stone walling for a good deal; the story goes that we even subsidize his salary as part of the loan deal, which suggests the club is unable to foot the fat wages Arsenal have put him on. Denilson can still be a good DM for some mid table sides though.

Weird. This DM has quotes of Denison saying his contract runs out this summer.

The fact that you quoted DM tells you everything.

[…] Sao Paulo ready to send Denilson packingArseblog News (blog)According to a report in the Brazilian media, Sao Paulo now have no interest in keeping Denilson on a permanent basis once his loan ends at the end of June meaning Arsenal will have to source another buyer if they are to offload the midfielder this summer.São Paulo midfielder Ganso hopeful of return to national teamSambafoot.comall 3 news articles » […]

Even youtube cannot save Denilson. His videos stop playing forward after 20 seconds.

Get him back quick, Stooooooooooooooop right there wenger ……………….. why bring him back when he is so happy at home with his family ,buy out his contract and let him go even on a free …

We need someone to stand at the airport and put him in a taxi with Bendtner being the driver. That should end their contracts one way or another.

nasri is a lie. as a good player like u, u cant be in a team with one year contract whiles u want to run down ur contract he dont want to sign a new contract he want to be free agent it impossible the board beside to sell him to get a good money from him that is good business it not the fault of the board but it the fault of nasri is he should have sign a new contract without asking for more money he will have stay at arsenal

I’m worried they ring even sign me up next year 🙁

Won’t * maybe they were right I am going senile

Maybe you are if you think your Wenger

Personally i think he should be brought back. Would be a great addition…..to the bench during training sessions along with Squid.

Would be a huge step back if we took him. Can we like wipe off his memory and send him to a cotton factory in brazil.

[…] there’s good news for Denilson fans, he could be coming back! Sau Paulo no longer want him because Arsenal are asking too much and he had a run in with a fan […]

I’m going to be a little contraversial here but i’d quiet like to see Denilson back. Always thought he looked very good when he first joined but thought he was a victim of Wengers policy of shoe horning youth into the team. Denilson is not, has not and never will be a defensive midfielder, he needs to play along side one. I’d quiet like to see a few of the players who were part of Wengers youth policy who have been out on loan back, as i never thought they were short of talent but experience.

Methinks its about price for Sao Paolo. What’s the Brazilian equivalent of a BOGOF?