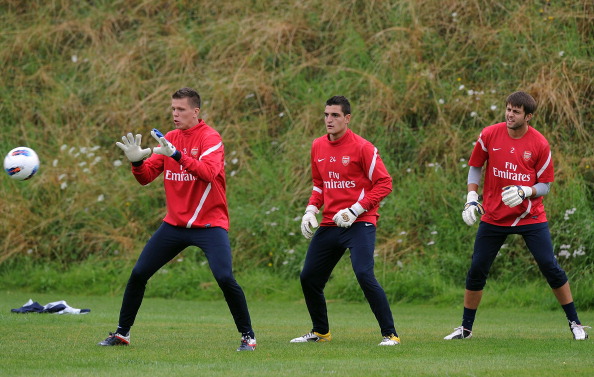 Arsene Wenger says he has faith in all three of his keeper options as he prepares to return Wojciech Szczesny to his Arsenal starting line-up.

Dropped following a downturn in form, the Gunners number one looks likely to start tonight’s showdown with Everton after a six-week spell on the sidelines following a rib injury to Lukasz Fabianski sustained in Saturday’s win over Norwich.

Having marshalled his defence to two clean sheets and five consecutive victories the older of the two Poles has cut an impressive figure between the sticks, although the boss maintains that Szczesny and third choice stopper Vito Mannone have also done well when called upon this season.

“I have total confidence, no matter who starts the game,” Wenger told Arsenal.com.

“In the past I have shown that, that I trust these players and trust that no matter who plays, they will show their quality.

“We have three good keepers. That’s been shown during the season. Everybody had the ability to show his quality and that’s what you want.”

Praising Fabianski for his contribution in recent weeks, the boss underlined that his absence this evening was not necessarily cut and dry, even though he did make clear yesterday that the 27-year-old was a big doubt.

“Fabianski’s reflexes, his positioning and his decision-making has been great,” said Wenger. “We will decide as late as possible [on his availability].”

“[Szczesny has responded] really well. He worked very hard and worked very well. I do not want to make a case of it before the game. He’s handling the situation very well and in a positive way.”

Sorry Rohit but Chessers and Fabianski are not GREAT keepers.They are both good keepers and Chessers has potential to improve.

That is the problem, they are all at about the same level and no one is really grabbing the chance to claim the shirt. Szczesny still has the potential to be better than the other two but he need to shut his mouth and let his performances talk.
Saying that, Fab has benefited from a settled team so it does make his job easier.

I think Szczesny’s father should shut his mouth first

shut his mouth? he’s been very disciplined lately. closed his twitter account, and really the only time I can remember him talking when not in an interview is the time he defended Arsene’s decision to drop him after his dad started yipping about it.

You are right on that one, I sit in front of my computerr corrected

I think gk is the only area we are not top club level, as much as I love both poles, Fab should have been on loan somewhere playing 40 games a season, but hes been out injured or sitting on the bench. Scz has the potential but its rare top clubs play 21 year olds and expect no mistakes, I mean look at the amount De Gea makes. The best keepers in the league tend to be in there 30s and have played over 300-400 matches, all our keepers combined don’t even have that…

then again, a goalkeeper aged 27 out on loan can’t be what we’re looking for, can it? I also beg to differ about keepers having to be in their thirties to play at the top level. kahn and casillas, for example, were first choice from very early on…can’t compare them to the lama at Old Trafford

Kahn and Casillas are legends and probably some of the best GK ever, Casillas won the champions league twice before he was 21…I’m not saying scz hasn’t got what it takes to be one, but hes got to start learning fast and cutting out mistakes. And to be fair no ones mentioned Scz terrible Euros, that must have had an effect on him this year. Its all down to his mental strength to make himself the best and seeing as Wenger rates him who knows 🙂

Who said we’re looking to take a 27 year old keeper on loan. We need to take a leaf out of Brian Clough’s book and buy the very best keeper we can. Get the right keeper and everything else becomes a lot easier. If you rely on a callow youth with an inflated opinion of himself or an unimposing guy that’s good in training but is bullied by opposition players at set pieces, then you are asking for trouble. Since Almunia took over in goal we have been extremely suspect at the back and arguably lost out on trophies and… Read more »

Very true butthe games have got to come from somwhere, woth Fabianski he has had his injuries and fluffs in the past with Woijech he is still raw but I believe Casillas and Buffon ( maybe) started out very young in the team and have een there since! Cech came to chelsea at 23/24 I believe but I do feel that we are starting to get a bit of respectabiltiy back in our GK department. Perhaps that is more down to our defenders sorting themselves out and our team defending better as I can’t see how Fabianski became so good… Read more »

I would be inclined to say that it is a good thing having them all at the same level and fighting for the top spot. Although it can get risky and all of them could collapse inder the pressure but if beither can grab the spot because the other is improving, the he too will have to improve therefore they will be pushing each other and improving – thats benefits Arsenal. In my mind I find more peace in knowing who will be the first choice but this current situation seems the most suitable to our team. It is happening… Read more »

Wouldn’t expect Arsene to say anything less to be honest.

All are decent understudies but none could tie the boots of Seaman or even Mad Jens but I think Szcz is the one with potential if he can drown at the hype from his own father and his own mind for that matter.

Might be a possibility of Mannne starting the game too, since he’s been on the bench.

No, I think it’ll be Szzzcccy

So deffo not Fabbbianski then?

Looks like Fabianski is eyeing a cute girl at the other end of the training ground…look at that smirk!

Heh. The picture does look hilarious, doesn’t it?

Szc would be world class today i reckon! Verm and kos should start as theyre faster, stronger and better in the air than Mert, therefore would be better at keepin Fellaini and Anichebe quiet. Verm didn’t do anythin wrong on Saturday and it just wouldn’t go down well with him being the club captain and gettin dropped again after just 1 game. Monreal and santi on the left for communication and understanding in attack and defence on that side. Our Rozza in ACM with gervinho or theo on the right!

Oh no.. It´s a bad sign. Fabianski is injured and is wearing a number 2 training shirt in that picture. We all know what happened injury-wise to the guy who wore that same shirt last time…

That I believe is an old picture.

Gooner in Spain
Reply to  Nognir

Awesome video… terrible translation. As much as I hate the man and want to believe his thinking is that perturbed the translation is sadly way off and purely for comedic effect, as stated below the video. Would love to see it get mainstream coverage though as football media can’t be bothered to check with a decent translator.

Nognir
Reply to  Gooner in Spain

Yes obviously the subtitles are for comic effect (For those who don’t speak French). Bit like the “Hitler reacts” videos that are quite common now

As hilarious as the translation is, Nasri actually comes off really well here. The interviewer is asking him about how he feels about being compared to Zidane and he says he doesn’t want to be compared to him. He comes across as a very humble, sensible kid.

Shame he grew up into such a monstrous cunt.

Lol that’s gold! came across this one too. Inside the mind of a skunk.

Lol. Sadly its not far from the truth. I really rated Nasri and i think he would have been a better player had he stayed at Arsenal…..but hes not so fuck him.

davonz points out the obvious on a blog so we can hear it. Wish Arsenal fans didn’t have to hear it.

It’s great to see Fabianski playing so well after he was given so much grief.
His kick leading up to the third goal on saturday was immense.
Really great distribution.

People say we have a goalkeeper crisis but Fabianski, Szczesny and Mannone aren’t too bad. If they were all as good as each other, it’ll only cause problems. But they’re not.

Szczesny has potential but so did Francis Jeffers and we all know what happened there. He needs to prove himself on big occasions and they don’t get bigger than Everton tonight (for now, anyway). If he does exceptionally well, keep him playing. If he doesn’t, then bring Fab back when he’s injury-free.

To be fair none of these three are good enough. All have parts of their game where they are lacking. Arsenal need to clear out Vito and Lukasz (even though he’s been much better), and bring in an excellent, experienced keeper even if it does mean paying a lot. The point in doing this, apart from improving our defence is to provide serious competition to Wojciech and get him focused on improving and being professional about it. If Wojciech doesn’t like it, then he knows where the door is. His form hasn’t exactly been stellar this season, and certainly doesn’t… Read more »

Sczcezny should have a good game. It looks like he has a slight weakness in saving long range shots. Everton don’t have any players who have a good long range shot but they’ll use Baines and others to hit crosses and freekicks for Anichuba and the afro hair clown. I think scz is better in dealing with such set pieces and crosses than fab.

Baines is actually pretty damn good from long range. We’ll have to be especially careful with conceding free kicks around the edge of the box. We basically need to stop them playing by keeping the ball but we need to move it quite quickly as they are usually well set up.
This is always a tough game, especially when they have a full compliment. Luckily so do we, pretty much.

Forgetting Gibson with his rockets mate.

The day you fear Darron Gibson is the day you stop playing football.

Tonight we will show that we don’t deserve to fight teams like Everton for top 4 but should be fighting for the title. I think we shouldn’t over estimate teams like Everton and under estimate our selves if we want to be successful. We should also punish that fucker they call “sir Alex F word ” and Martin Jol in the coming weeks.

I totally believe so. he was doing great keeping clean sheets at the beginning of the season and Szce came back and allowed the Saints to ruin our lil run. Why did Arsene stop playing vito when he was playing quite frankly better than WS will never kno. even after he made mistake after mistake. ppl gonna say WS is better but when a defense and is playing well why change? he totally needed another opportunity.

Buy a decent keeper. Be honest here… Schez is still learning and he’d make a great number two, we’ve been lucky with Fab and he’s done a great job. In your heart of hearts Gooners we need a true Number 1. Begovic/Vorm the likes of those or better…
Going back to Wenger stating that he’s been training Podolski in centre the other day, do you think we may see a 442 scenario next season??