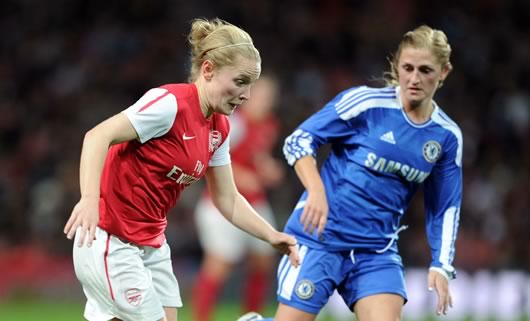 Having played a Champions League semi final and an F.A. Cup semi final this month, it seems slightly odd that Arsenal Ladies are yet to begin the defence of their Women’s Super League crown. With assorted cup commitments in April, Arsenal kickoff their defence at Emirates Stadium on Tuesday night against Liverpool. The visitors have finished bottom of the WSL for the last two seasons but it’s unlikely they’ll complete an unwanted hat trick in 2013.

The ladies side on Merseyside have undergone heavy investment, have a new manager and a host of new players attracted by Liverpool’s decision to make their Ladies team a full time operation, training 5 days a week. They’ve even joined in with some of Brendan Rodgers’ first team training sessions.

However, Liverpool don’t have a player like Kim Little in their ranks. Kim is last season’s top scorer in the WSL despite being a midfielder, she topped the assists charts in 2012 too, scored a late winner in the Continental Cup Final in October, scored the winner in the F.A. Cup semi final against Liverpool last week and now has the distinction of winning the inaugural PFA Women’s Player of the Year award. (A few hours after conducting this interview, she also scored a late equaliser against Lincoln City at Sincil Bank).

The last time the girls played at the Emirates last April, Kim scored a goal of the season contender against Chelsea in front of a record WSL crowd. Ahead of this Tuesday’s match with Liverpool, she caught up with Tim Stillman, exclusively for Arseblog News.

1)     Kim, you’ve enjoyed such an excellent year, with many notable achievements. How on earth do you top that in 2013?

It has been such a dream year for me, winning the Double with Arsenal and winning the first PFA Women’s Player of the Year award is such a huge honour too. Playing in the Olympics for Great Britain was probably the pinnacle for me personally because it’s a once in a lifetime opportunity to represent GB in the Olympics on home soil. 2012 was very good to me.

The way to top it is pretty simple. I want to win the treble with Arsenal, which we didn’t quite manage last year. Unfortunately the Champions League is no longer attainable, but we want to win every other competition we are in. For me personally, I want to score more goals, make more goals and perform at an even higher level more consistently. There’s plenty I can work on and I plan to.

2)     Moving onto Tuesday’s game. Liverpool are a different proposition this season. They’ve invested heavily on players in the close season and have gone full time. Manager Matt Beard says he expects a title challenge in 2 years. Do you think they can challenge sooner than that?

I think they can yes, I expect them to be right up there. But I think the league itself is going to become much tighter this year and that it’ll contract a bit. Every game is a battle now because the league has improved so much. But Liverpool have obviously brought some exciting new players to the club. We played them on Friday and it was such a tough, tight game. They’ve improved their squad significantly and those players won’t need long to gel. They’ll challenge I think.

3)     Another season is about to start for the girls. Birmingham, Everton and Liverpool have all undergone some upheaval, Chelsea have a new manager, as do Arsenal of course. Who do you see as the biggest threat for the title?

I haven’t really thought about it because we’re so focussed on what we can do to retain the title, which is of course our main objective for the season. Birmingham have lost some players, but they’ll still be up there, make no mistake. Everton too are very strong and there’s never much in it when we play against them. Like I said, Liverpool have improved and Bristol Academy have recruited a couple of Spanish strikers (Natalia and Laura del Rio) that have brought them real quality upfront. I’m not sure there will be one challenger in particular, I think it will be very tight between several teams up there. Everybody’s getting more competitive in terms of squad strength every year.

4)     You got a close look at Liverpool last week having played them in the F.A. Cup. Who should people watching on Tuesday night look out for from their team?

They’ve signed Fara Williams from Everton and she’ll be very dangerous in midfield. She has a fantastic passing range and reads the game very well. Natasha Dowie upfront (that would be Iain’s niece) holds the ball up really well and is very good at bringing others into play, so we’ll need to manage her too. They also signed an American girl called Amanda da Costa and she really impressed me last week. She’s very nippy and elusive, we’ll need to be very wary of her. But Liverpool are very strong all over the pitch now. They signed Gemma Bonner from Chelsea in defence, we’ll need to match them all over the pitch.

5)     Prior to the Liverpool semi final at Anfield, I asked Shelly http://news.arseblog.com/2013/04/exclusive-interview-with-new-arsenal-ladies-manager-shelley-kerr/ if playing at Anfield would lift Liverpool. She suggested it might put pressure on them. With Tuesday’s game at the Emirates, is there an additional pressure on Arsenal?

No I don’t think there is, what it does is makes the game more exciting. I know I’m really looking forward to it and so are the girls. Hopefully we’ll get a really good crowd in and that should inspire us really, to play in such a fantastic arena and on such a good pitch too. It will be my 4th time playing there, so it’s not really something that’s new but it is something that’s very exciting. We got a record crowd last year for the Chelsea game and we want Tuesday to break that record. We want to put on a good show and entertain the supporters that are coming to watch us and hopefully we can get them to come and watch us a bit more and increase interest in the women’s team.

6)     Staying with Shelley Kerr, who you’ve worked with before in the Scotland set up, I’ve seen her compared to David Moyes in the press and having spoken to her myself, I can appreciate the similarities. What’s changed in training under Shelley?

I’d never thought of the David Moyes comparison before but it’s a good one! Shelley is a very good communicator and she puts her ideas across very clearly. We train together as a team more. We do specific sessions now, looking back at previous games and identifying things to work on that we want to improve for the next game. She’s very meticulous in her preparation and we work as a unit. Shelley has brought some freshness and her sessions are very hard work, but we’ve really enjoyed them. She really focuses on specifics.

7)     As well as an F.A. Cup semi final this month, there has been the small matter of a Champions League semi final against Wolfsburg. Unfortunately, we couldn’t get through on this occasion, but one of the most intriguing aspects of the match was your midfield battle with Wolfsburg captain Nadine Kessler. Is she the toughest opponent you’ve ever faced?

She was a very tough competitor and a fantastic player for sure, but I’m not sure she’s the best I’ve ever faced. She’s up there though. The whole of Wolfsburg’s midfield is very impressive and very strong, especially defensively. They work and defend as a unit and they worked the flanks really well too. They were a very tough side and we know they deserved to win over the two legs.

They stopped us from playing and then when their chances came, they took them, which we didn’t necessarily do. Nadine is a fantastic player and Wolfsburg have a very strong midfield and I think that’s where they excelled over the two games. They work very hard for each other.

8)     One of the most striking things about your game Kim is how two footed you are. Is that natural to you? How did you improve your left foot?

It didn’t come naturally no, but I did work on it when I was younger. That was down to my Dad, he was very hot on it. When we played football in the garden he’d do little sessions where he’d encourage me to strike the ball on my left foot. He’d do drills with me where he’d make me pass with my left, but he’d particularly work on me striking a ball cleanly at goal with my left foot. I worked on it at a young age and I still work on it now. I want my left foot to get even stronger, my right foot too, I can still work on that.

9)     Since semi professionalism came in in the shape of the WSL two years ago, the women’s game has made great strides. Do you ever foresee it being fully professional in England?

Yes, I think it’s heading that way. There have been a number of significant developments. First ESPN and now the BBC have struck up broadcasting deals with the WSL and with the international games too. The PFA are welcoming female members for the first time next year as well and we had our first PFA Awards last week.

The F.A. have given the women’s game a really big push in the last two years and I think the Olympics has really pushed the profile of the game up and the F.A. have done some great work to try and capitalise on that. Crowds are going up, coverage is increasing. It’s great to have the backing of the media and the associations. The game is moving towards professionalism slowly and I think it could happen quite soon.

10)  Kim, final question for you. You’re a prolific penalty taker yourself. If your life was riding on the success of a penalty kick, which teammate would you choose to take the fateful spot kick?

Ha! That’s a really good question. I think I’d give it to Kelly Smith. In any penalty kick in any situation, I’d trust Kelly. She has great technique and nothing ruffles her. I’d definitely trust my life with Kelly’s left foot!

Thanks very much to PFA Women’s Player of the Year Kim Little for taking the time out to talk to us. Arsenal Ladies play Liverpool Ladies at the Emirates on Tuesday night, kickoff 7pm. You can find out how you can buy tickets for Arsenal’s all conquering girls here http://www.arsenal.com/news/news-archive/ladies-arsenal-v-liverpool-tickets. Tickets are £5 adults and £2.50 concessions.

She should have stuck to rappin’!

Nice to see some more Arsenal Ladies stuff getting through!

I want to boff Giroux and I'm not even gay

Well I tell ya what, she could work around the edge of my box any day, but I’d make sure she didn’t get into the hole and I’d be showing her my tackle as soon as she got near enough lol!!

Leave it out boff,if she pulled one out of her locker I’d “show it to her early doors for fun”.

I want To Boff Giroud And I'm Not Even Gay

Olivier you've dropped yer pencil.
Reply to  I want To Boff Giroud And I'm Not Even Gay