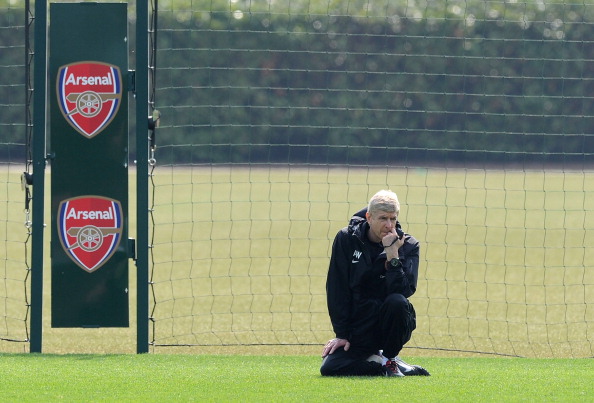 Arsene Wenger has urged his squad to focus solely on their own results over the course of the next three games with potential Premier League points permutations leaving even professorial bods at Oxbridge scratching their heads in confusion.

The Gunners travel to QPR tomorrow knowing they need to secure maximum points to maintain the pressure on top four rivals Chelsea and Tottenham who play each other next Tuesday.

Speaking at his weekly press conference the boss admitted that experience had taught him and his players that worrying about other clubs is unhelpful.

“Nobody knows [how decisive this week will be],” said Wenger. “The only thing we know is it can only be decisive if we win our games. That is compulsory.

“We focus on winning our games and then look at the results of other teams. The most important thing is not to lift your head, just focus on our job and continue our strong run. We have put a strong run together and we want to use this belief in a very positive way.

“Chelsea is in front of us and we play catch back. First of all we focus on what is important which is you and your performance and winning the game. We have learned this down the years and it is the right way to behave.”

With two away games on the horizon, neither of which yielded wins last term, you’d forgive Arsene for being a little cautious when talking about our form on the road, but the boss has been buoyed by the consistency his side have displayed up and down the country.

“We have been strong away from home and we had a good stability,” he continued.

“How do you explain that? I believe that at home at the beginning of the season, we played with some fear.

“Away from home we played with more freedom and expressed more our game and maybe as well because the home teams attack more against us than they do at the Emirates. Away from home we have had a good season.”

Reflecting on both his future and that of the squad, Wenger also spoke positively (quotes from Arsenal Twitter feed) about the manner in which the club have overcome the upheaval of the last two summers.

“Since January, we have become stronger and stronger. That’s important going into next season.

“We had to rebuild the team in the last two seasons. We have moved forward in the second part of this season considerably.

“I want this Club to do well. We have gone through a sensitive period but I believe the Club is in a good position for the future.”

Glass Half Full.Could be Gooners motto.
Sagna has overcome 2 broken legs last 2 seasons and still has regularly performed well considering he has to try and guess where Little Lord Theo will be appearing next.I think he has had too harsh criticism.I am sure he is aware that he needs to get his crossing back to what it was
but he is still a very good defender.

No fear, no handbrake, just show real intent for 90 mins and hopefully we’ll rip them apart.

Arsenal have really proven critics wrong since the Bayern game and I only hope we show the same level of commitment next season. It’s been one hell of a league year but we only get stronger for the next. COYG!

Yea though we walk through the valley of the shadow of death, we will fear no evil, because we’ve got three classy Spaniards, a pair of hammer wielding Germans, a smashing group of British lads, some quality Poles in the goal, the French connection and a Belgium who, poor form aside, might be a robotic killer from the future. Oh, and Mozart.

We are the Arsenal. Form is temporary, class is permanent. We’ll be fine.

Here’s to a decisive few days which see us win at QPR with a hat trick to Podolski, Manure stuffing Chelski, Southampton tearing Spuds a new one, and then both those teams drawing next Tuesday. Byah!

QPR is the total focus. Our form is excellent. More of the same. Just win please.

Finally I have some hope this time around that we will add to our current squad rather than playing catch up and rebuilding as in last few seasons. No major departures, no major player contracts coming up(Sorry sagna). Fingers crossed. Only thing i hope now is that no idiot/money grapping cunt should put up “you guys” column on their website.

and not end in a nail biting, gut wrenching, 4-3. Running out of heart…strength…

Treat QPR as we treated Jamchester Utd last weekend, and Bayern at the Allianz. More now depends on THIS game and every other game to the end of the season.

There can be no slip ups. This is endgame stuff, and any let up of resolve will result in disaster for Arsenal.

Arsenal Expects Every Man To Do His Duty.

Come on you Gunners.

I’d like for them to finally clarify what means “future”. We’ve been told about “the future” for a while now and yet it doesn’t seem to be getting better.

You mean you don’t believe everything that Arsene says?

Really hope that Cesar doesn’t have one of “those games”.

Also, if we actually get rid of the players that we want to, keep the starters and add 2 or 3 “TOP TOP quality” players, we’ll be in a much stronger position next season.

Good lord, the man will have been here for almost two decades, which in footballing time-spans is the equivalent of a geological epoch. If and when he goes it will be for the right reasons; he loves the club and the fans love him, barring the odd tiff.

Just play 442 this game with theo and poldi as strikers,ox and santi as winger and thomas and jack as midfielders and u are guranted goals but not 2 sure about a clean

Not sure if that would even work on FIFA 13