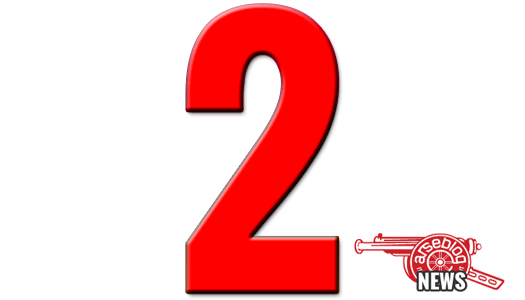 The first article we ever published on Arseblog News detailed the FA Cup heroics of the Arsenal Ladies. The second was about Nicklas Bendtner wanting to quit the club. The fifth was about Denilson looking for a move.

Two years and 2,323 posts later and you’d be forgiven for thinking that for all the drama we’ve endured, things haven’t changed that much…

Well maybe. But f*ck it. Our top four credentials remain unblemished (just), Sp*rs and their supporters have made tits of themselves again and for the first time in living memory it looks as though we won’t spend the summer collectively pooing our pants at the prospect of our best players leaving.

On any normal day that would be excuse enough for jelly, ice-cream and excessive amounts of cake…but today we’re definitely indulging as it’s our 2nd birthday.

To celebrate we’ve put together a special ‘by the numbers’. Cheers for reading and enjoy the stats.

65 – number of times mainstream media have copy and pasted our dodgy interpretation of Google translated articles from foreign press.

10,194 – YouTube views of our interview with Mikel ‘the hair’ Arteta

3,041 – The combined total of all the player ratings awarded after each game

6091 – days Arsene Wenger, now the longest serving Premier League manager, has been in charge at Arsenal

7 – points in the ‘gap’ before Spurs choked again

2 – number of times a day people still ask about our p1r.es link shortener on Twitter

0 – number of goals Nicklas Bendtner scored for Juventus this season

3,600 – pounds paid in fines to Hendon Magistrates’ Court as a result

6.5 – strength of earthquake felt on outskirts of Warsaw when Szczesny Senior saw his son had been dropped

100% – chance that all these stats are giving @7amkickoff a stiffy

Thanks again all, please help yourselves to a Rice Krispie cake, and we’ll get the party games started in no time. Now, where did we leave that bottle?

Your periodic reminder about commenting on Arseblog News

Happy birthday! Here’s to many more. Can’t imagine not checking Arseblog News on my phone every half an hour.

I never believe a story related to arsenal unless it’s on arseblog news, good rule to have

I remember when the Gunninghawk was the website to go to for all the latest Arsenal news, and if it wasn’t there it wasn’t true. It shut down about 2 years ago, so thank god Arseblog timed its arrival to perfection!

I think I’ll wake up early tommorow morning and check up le grove or just see what the talk sport/shite guys are upto……….

SAID NO ONE EVER!!! well perhaps only piers morgan….

Thanks for all the Arseblog goodness. I remember when you started the News site, and all I could think of was “YES! MORE ARSEBLOG!”. you didn’t disappoint, and the quality of your coverage is remarkable in its consistently consistent consistency.

and not just in patches!

No idea it was so young! Happy birthday, and thankyou for the often humorous way you all break Arsenal news

Gunner From Another Mother
Reply to  paddlejack

Indeed. And I love the references to some of my favorite shows ever.

5 – the number of time i refresh the page daily hoping for a rumour about we signing Messi.

Love from Australia , thanks for keeping us posted . who else is from here ?

Love from Namibia (Southern Africa)! …from close enough to you Subeyr. LOL! HBD! The humor here is a daily treat. …by the way, I learn a lot of grammar and vocabulary here too.

Can you please fix Arseblog News for iPad 3? I used to check this website first thing in the morning, but now it just crashes.

My favourite memory here: when you posted the link to this:

I never laughed as hard my whole life (at work!).

It works fine on my iPad. I assume you mean the website and not the app?

Yes, I mean the website. I downloaded the app as a result but it doesn’t include the comments, which are a big draw for me as well.

It’s an iPad 3, and tbh I think this is the only website that crashes Safari. It’s a real shame, can you please look into it?

As I said, it’s fine for me on iPad 3 so try deleting the cache from Safari?

Can you also check if it works in Chrome on iPad?

And again, all other websites work well on it, as did the previous version of Arseblog News.

Even when I remove all other apps from running in the background, it still crashes.

I would be very grateful if you could look into it please.

I’ll have you know I only watched that clip three times before I stopped dying of laughter.

Very happy birthday mates! Long may it continue. I love it! Thanks

Happy birthday and long may it last as I now totally addicted to it and spend most of my working day checking what is happening in the world of goons.

Happy birthday to all arses.

Arseblog has come a long long way… bk in 04 was when i visited the site for the first time, still as entertaining, congrats and good luk

Happy birthday arseblog and here’s to many more

Happy Birthday! Love this place, can’t imagine my days filled without it.

Happy birthday Arseblog all the way from cape town SA.. Helped me grow into a better gooner.. most visited sight by far.. And special thumbs up for the windows phone app.. Simple yet thought out..

Thanks from South Korea for all the good work you folks do. The blog, the news, the book all help me love the club that much more.

I’m a relative newcomer to some of these posters – came across the blog 2 years ago and i laughed so hard I kept coming back for the comedy value about somthing I loved. Then the Arse Cast, then the news.. you grew on me 🙂

My morning just doesn’t start till I read the blog.

Happy Birthday Bloggs and looking forward to many more – your genius 🙂

Oh and since you’re reading this:

I particularly like the stat on total Arsenal rumor ignored – it’s the largest service you are doing to the Goonerdom. Every agent work his salt uses Arsenal to engineer a better deal for his client, so there would be many disappointed fan where it not for this site.

Having said that, hoping to see a few rumours, here, about us signing some top, top quality players soon.

Most grateful for this. And many more!

Great work fellas. Thanks and keep it up.

Now if only you’d said a Smartie caterpillar cake…

Oh and today is also my birthday. Fuckin forgot as well, which only shows I might be slightly older than Arseblog News.

So you already got a Smartie caterpillar cake then? Lucky you. Happy birthday.

just started following this blog last year. Didn’t know it was so young.. keep up the good work mate oh and i love the way you don’t mince words (uncensored) with the arsecast.

Happy birthday, two candles on the cake and two fingers up to spuds, ps is it true that monkey boy is the most booked player in premier league history for diving??

Hopefully he won’t be in the Premier League long enough to get that record. He needs to move to Spain NOW!

Happy birthday from Singapore!
Always looking forward to your articles which helps me sleep at night

The first article I read on arseblog was about a dog that had passed on…I think blogs’ dog. sorry blogs. Anyway, that is the same day I quit reading shady blogs such as le grove.Happy birthday Arseblog

How old is the blog in football years?

Younger than two years because it got injured when fatgooner joined.

Happy Birthday from Cape Town, South Africa! Love the Arsenal and love your website! Keep up the good work and here’s hoping for success and awesomeness on the Arsenal front for years to come 🙂

I swear to God, Arseblog makes me happy every time I read an article of it. Mostly articles about when we finally finished this season above the Spuds and also got UCL spot. Happy fucking birthday, may you guys live on forever. Never knew I could call my own family “legendary”
– from Pakistan

Many, many, many more happy returns of the day Arseblog!
No other Arsenal website comes close IMHO.
Keep it up! (fnah)

Happy Birthday Arseblog News!!!
Been a loyal follower these past few years.Keep up the good work.

You’re not as good as Le Grove!

ha, is this where you come when you want to get wound up enough to post over there?

*not angry enough yet, must visit arseblog and become driven to rage at all the people who don’t think the sky is falling in NYARRGHHH* <– something like that?

My posts are the only rays of truth on a dark and largely ignorant website. The problem with this place is that there are too many people in denial.

I am the truth and the light – so just listen to me.

I remember when this thing started and I called 7am a few bad things and got banned for a few days. That sucked. I’m glad I apologized and the ban was lifted. Heh.

Don’t know weather to wish happy birthday or not? reason, there should be some happiness in my heart to do so, which i feel is not forthcoming… me not feeling happy is not about the sad condition the club are in (8 year drought + lack of ambition+….), the gradual softening stand of the blogger towards our clubs apathy… its not like i dont like the blog, i am reading it for past three years or so…. i remember a particular blog post our emphatic collapse in carling cup final, FA cup and champions league all in two weeks period,… Read more »

A simple “Happy Birthday” would suffice. He’s a blogger, not an Agony Aunt. What I like about this blog (though it’s the Blog News we’re celebrating today) is that Blogs tells it how he sees it. If he sees it differently to me, or you, is that any reason to write an essay berating him, twisting his words tosuit your own agenda, and accusing him of being bought by the club?

You, sir, are a prize plonker.

It’s not arseblogs thought. You do know that don’t you ?

Greetings from Nigeria. Happy birthday arseblog news. This is more than just a news site, it’s a community, a place where gooners can get together and share views. I’m proud to be a part of it and I hope it continues for ages. Cheers!

Thank you Arseblog for all your fine work. Greetings from Norway ♥

Happy birthday Arseblog. I really love this site. Oh… U forgot to write this 12345-no of times v. Persie was labelled cunt after just a year he left arsenal.

Can you not reply to an individual post in this new format? I wanted to call that guy up there a cunt, but to no avail.

Have you tried this format of replying?

Happy Birthday Arseblog news, may you live long and prosper 🙂