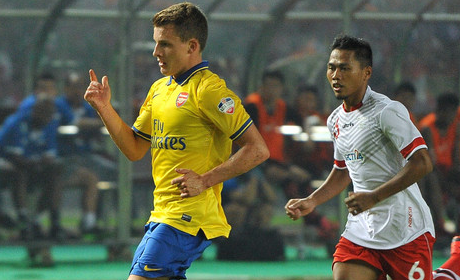 So far, so very good for Arsenal’s youngsters in pre-season.

The first week of preparations for the new campaign have gone very well indeed for the club’s younger contingent, with a talented selection of players impressing during the first-team’s opening friendly in Asia, whilst, on the domestic front, a younger U21 side than usual managed to see off Sutton United with a 4-3 victory on Friday night.

It is the Asia Tour, however, which has garnered the most attention. Eight players from outside the first-team made the 24-man squad, with Damian Martinez, Ignasi Miquel, Chuks Aneke, Kristoffer Olsson, Serge Gnabry, Chuba Akpom, Thomas Eisfeld and Gedion Zelalem all being called upon, whilst Nico Yennaris was left at home owing to injury.

All eight players featured at some point during the 7-0 trouncing of an Indonesian Dream Team on Sunday, with Akpom, Olsson and Eisfeld getting on the scoresheet and Zelalem, on his first appearance for the senior side, impressing with some perfectly-weighted through-balls.

Akpom, too, earned praise from Wenger in the aftermath of the game and it is easy to forget just how meteoric the 17-year-old’s rise has been in recent times. Just over two years ago he was featuring, and, naturally, scoring for the U16s in an end-of-season friendly against Aston Villa and now finds himself very close to the first-team squad, providing an example to the many youngsters working their way through Hale End that it is possible to get close to the first-team.

Olsson, meanwhile, was extremely comfortable in possession, and, even if his goal was little more than a tap-in following a stupendous pass from Tomas Rosicky, will have been delighted to have found the net for the senior side, as will Eisfeld, who seems to score in almost every game he plays, such is his uncanny ability for being in the right place at the right time.

Back in England, an Arsenal U21 side containing debutant Dan Crowley just about managed to see off Conference South side Sutton with a 4-3 victory. Crowley was largely impressive in the first half as he frequently slalomed his way past defenders, and the 15 year old won the free-kick which Jack Jebb dispatched expertly. Jebb found the net again and could have had a hat-trick, whilst the ever-lively Anthony Jeffrey and the composed Isaac Hayden also found the net.

The rhythm of the game was largely disrupted as both sides made a whole range of changes at the interval, with Arsenal handing a debut to another summer signing, Jamaal Raage, who slotted in well on the right wing, whilst Wellington, back from his latest loan spell in Spain, was also handed a rare outing in red and white. Sutton showed spirit, however, and managed to claw the deficit back to 4-3, but Arsenal just managed to hold on for victory. They face Boreham Wood on Saturday in their next pre-season outing prior to further fixtures against Leyton Orient and Luton Town.

No matter how good they look in pre season, only 2-3 max players make it to the first team. Nothing to get excited about.

Zelalem gets me excited 🙂

He sure knows how to thread a ball

You don’t find 2 – 3 youth players getting into the first team exciting? Really? I guess your reaction to Wilshere and Gibbs must have been “Meh, just 2. Boring.”

Abit off subject, the away kit came out on the 9th but what about the home and 3rd kit? Are we keepin the same ones from last year?

I suppose so, especially given that we’re switching to Puma next year. And also, remember that before the kit we had now, there were two seasons with the same kit too (the special 125-years one).

The 125 anniversary kits were only for one season – http://www.historicalkits.co.uk.

they aren’t supposed to change the kit every year. its supposed to be a 2 year cycle but loads of teams bring out special kits for anniversary seasons. Except spurs, who just release a new kit every year anyway.

It is a bullshit, the same media that saw Higuain undergoing medical in England. Remember Cazorla is still on break. Fake news, relax my guy, nothing concrete about this.

Yep, the same media company whose photo of Higuain arriving in a London for his medical had a spanish prosegur security guard and a car with madrid number plates in the back ground. Quality reporting.

If you’re sure why would you even bother asking here in the first place?

Every day Cesc is linked to United, Higuain to Arsenal, Suarez to Arsenal, we might as well ask about Bendtner to Madrid.

The young chaps played well, players like Eisfield and Gnarby are good for first team selection.

The young players were given tons of space by tired & piss poor opposition with no spacial awareness, theyre bound to do well. The only ‘dream’ about the indonesian team is that its the only time those youngsters will look good on TV. Some dream huh?

Your attempt to fit in is also a dream.

I think I’ve finally realised that you’re a Spurs fan.

Why are so many idiots on this site waffling on about Arsenals kit? Your meant to be talking about Arsenal youngsters and I can’t make a judgement on how good they are, by playing friendlies against low level opposition.

Not for you to make judgement!!!