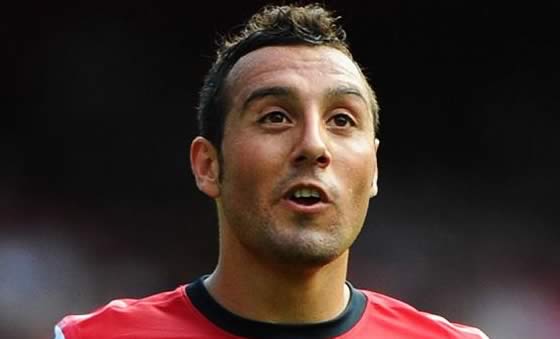 The Spanish international had been given an extended break following his participation in the Confederations Crap which took place in Brazil earlier in the summer.

The former Malaga man earned the rest too, he was the only player to be ever-present in the Premier League for the Gunners last season and, in his first campaign in England, that’s quite something.

“I’m very happy in London,” Cazorla told Marca last week when the nonsensical story linking him with Atletico Madrid was put to him, and he’ll be looking to build on such an impressive first season in English football.

It seems unlikely that he’ll be involved in this weekend’s Emirates Cup having had so little time to prepare.

Nacho Monreal also comes back today, but is suffering a back injury which Arsene Wenger admitted leaves him short in at left-back with Thomas Vermaelen ruled out for three months.

Monreal will be assessed by medical staff on his return and we should get a clearer picture of his situation as the week progresses.

I’m backing Giroud, Walcott and Santi as our tops fantasy scorers (in that order) this year!

welcome back our maestro,ple also take zelalem under your wings!!!!!!!

welcome back our maestro,please also take zelalem under your wings!!!!!!!

…then realises it is only July and stops shitting himself

Well, it’s not really July anymore, and anyone we sign will have suboptimal squad cohesion/chemistry given that he’s just missed a two-week bonding tour of Asia. Not shitting myself yet, but I’ve felt some bowel movement.

Santi is a little magician. Jack, Rambo, Santi, Arteta…the middle of the park is looking pretty awesome. Imagine if Diaby wasnt permacrocked….it would be downright sick.

The middle of the park would look more awesome with some variety and depth, of course they are all amazing talents though.

Middle of the Park? Apparently the whole of Park is missing for a while. No one knows whether he is in Spain, England or in some Korean military camp.

No, that would be pretty healt….oh nvm.

I love the idea of taking that cohesive attacking play from pre-season and adding Santi to the mix.

hope he brings cesc along 🙂

I think that the rumours about Santi to Atletico are all about Fabregas, IF, IF, Arsenal hijacks a Man U deal for Fabregas I could see Wenger selling Santi to Atletico. Forward line of Walcott, Suarez, Bernard with Fabregas sitting behind?

I just realized he wasn’t apart of the Asia Tour and we still kicked so much Arse.

Pretty sure Maradona and Santi are the same complexion mate.

Welcome Maestro. Hope you destroy Napoli and Gala this weekend!

Would like to see what a start we would get if we have santi-rosicky playing together. The second half of last season was one to enjoy so with a fully fit TR7 and santi well adapted to the league, can’t wait

OH! I tut he was suppose to resume training at Athletic madrid.. Useless tabloids. Welcome home Santi. Thank God it is not the DNA vampires that want him.

His talent is unquestionable but I pray that the second season syndrome has nothing on him. As blogs said in his post today, all we need in the middle of the park is ONE experienced body who hopefully has a balanced mix of physicality and finesse. Welcome back Santi.

But I thought he was in madrid holding “secret talks” to join athletico after Villa his good friend persuaded him to join?

ah get out of here you cocks!

Cazorla is enjoying his arsenal footie, I doubt the though of leaving has even crossed him.

It’s his cheeky little grin. Just looking at his face rekindles my enthusiasm. I love that guy!

It’s his cheeky little grin. Just looking at his face rekindles my enthusiasm. I love that guy!

So much I’ll say it twice.

We need Santi to be fresh for the big games against City, Utd Chelsea Liverpool Everton etc. Give him a break against the Palace’s the Cardiff’s and the Hull’s etc. League cup even the FA cup should be rest time. He will be on International duty as well remember. 30 EPL starts and 10 ECL starts will do it.

You must be kidding! We def need him for Hull!
What have YOU been smoking?!

I love that higuain will be in trainning ground… at napoli!

Really? Where did you see Thierry?

Welcome back Santi, let’s hope he can build on that great first season. Will this be the week where he is joined by more new team mates? I think the blog today is largely positive, it highlights what a excellent XI we have but what about the inevitable injuries throughout the season. I think manager and club are fully expecting at least 3 new players but when this happens is another question. I don’t think we can wait until the last day for all of them. Not with a potential 5 games in 15/17 days at the start of the… Read more »

Welcome back son…..with a fully fit Arsenal side anythn is possible ichng for th start of th season fed up of th transfer window

Look up Santi and Mikel’s stats from last season
and it’ll show just what a joke the so called PFA’s ‘team of the year’ is.

We need a defender

So Captain Obvious’ first name is Jomo is it?

welcome santi……hope wenger doesnt mke me give a back pass to almunia here virtually…..oh and torres scores against me via almunia’s commical sh※t. damn

cazorla well com back please show them this season that you are the best in EPL ohhh santi we where worried abut you we really enjoying watching you live here in Uganda.

HAPPY CAZORMAS! What will Santi bring us this year?!