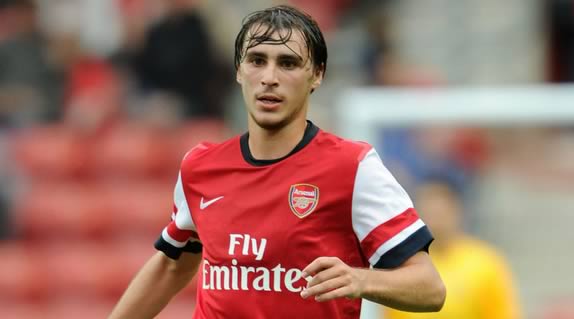 According to El Mundo Deportivo, Real Sociedad have identified Ignasi Miquel as a potential target as they try to cope with an injury to central defender Mikel González.

Miquel joined Arsenal from Catalan side Cornélla, having been released by Barcelona, but has yet to establish himself firmly in the squad.

He played just once in the Premier League last season, a late substitute appearance at the Stadium of  Light as 10 man Arsenal hung on for victory, as well as making two Capital One Cup appearances.

So far he hasn’t been sent out on loan and his contract expires in 2014, meaning he can leave for free should it run down or Arsenal decide not to renew.

But the Gunners have injury problems at centre-half themselves, with Thomas Vermaelen set to miss the start of the season with a back injury that is rumoured to be more serious than early reports suggest.

Either way, it seems Arsenal will have to move for a defender, and previous good relations with Sociedad, to whom they sold Carlos Vela, may see something happen if the offer is right.

The Spaniard is away on the Asia Tour so any developments are unlikely until the team returns from Japan next week.

To say we are thin in the cb department would be an understatement, however I think it would be best for his development to go on loan.

yeah it might be good to loan him there. Though a premier league side would be preferable

Miquel only goes on loan if we’ve four ‘first team’ central defenders. All internationals. And all world class.

With the dreadful Squillaci now at Bastia, and the ‘still-only-26’ Djourou on loan at Hamburg we’re already down on last season. Doing anything with Miquel before we’ve actually brought someone else in would be dumb.

Wouldn’t be surprised. Never seemed likely to be a long-term regular in the first team.

Am I the only one who would like to see him in our rotation of 4 CBs? Assuming the other three are fit, Miquel would be our 4th choice. I think the lad has looked promising in the various cup games he has featured in the past 12+ months. I mean people are saying we need to buy a CB. We have three world class ones at our disposal right now (when TV5 gets his mojo back) So who could we realistically sign to join in the group. You would expect a young promising CB and we have one in… Read more »

I agree with this. I think he would be a good 4th choice.

i have already said this before, so i agree

I noticed that arseblog news believes that no deals will be completed before the Arsenal team return from tour. I wonder if that’s true. Can’t some of the deals be negotiated through the phone or video conferencing? Afterwards, someone from Arsenal’s staff concerned with transfers (Dick Law or others because I hope we do not depend on just him and Gazidis to do our transfer business) can meet up with the other club’s representatives and complete the deal. Am I making sense or is what arseblog news assuming the regular thing?

Wouldnt be suprised to see him sold. Has happened to the likes of Nordveit where they are taken on tour but eventually sold. He is one of the leading defensive midfielders in Bundesliga now. But then again we cant have every young up coming player in the team but it would be nice if we strengthened accordingly.

Keep Miguel here. He’s on the up.
P.S. This might not be relevant to the above story but if Fabregas goes to United I’m going to have a bit of a cry. Also, if we must buy a scumbag from one of our rivals, I’ll take the fat-headed granny botherer over Chewy Luis and the news any day of the week.

Chewy Luis. Nice. I’ve been calling him Buck Chomper In The 21st Century.

I have to say that despite the weather being as welcome as it ever could be, this summers crazy transfer rumours, inactivity, lies, counter lies, frustrating silences and general anything that can fuck up an Arsenal fans head will happen, makes me feel like its winter in antarctica.

Miquel showed some real promise in the handful of games he’s played in. It’s a shame if he leaves because he’d be perfect for 4th choice. Far cry better than signing a certain 28 year old Welshman to sit on the bench.

He’s so young for a centre back, but his situation is tricky because he’s obviously a very good one for his age. I would like to see him stay and fight for his chance. He seems to be a passionate and dedicated player and doesn’t seem to brainfart too much.
I think he has the right mentality, it’s just a question of if he goes out on loan will we see him again?

Off topic but can’t help wondering about how Arsenal handle their outgoing transfers. Players like Cavani are being sold for 50m+. Even other PL clubs Liverpool (Suarez), Utd (Rooney) are quoting high prices and knocking back reasonable bids (30m) for those players. Then why did we let RVP go for “meagre” 24m. Why didn’t we put a straight quote – “If you are in PL take him for 40m, otherwise take him for 30m”?

because he was in the last year of his contract and we risked getting nothing for him and he’s a c*nt.
Cavani, Rooney and Suarez all have/had a few years left on their contracts so their clubs are in a stronger negotiating position.
I know Cesc also went cheap, but again the circumstances were not really favourable for us; there was no bidding war to be had because he only wanted Barcelona.
Previous to that we’ve always managed to get at least the true value and sometimes above and beyond the value of most players we’ve sold.

Miquel has been at the club four years and knows the system. His potential and low wage, 5k per week , makes him too valuable to let go especially with Vermaelen in doubt. If Arsenal do buy another CB, it would take time for the new player to settle in. Miquel could still be loaned in January so keep Miquel un till January at the very least.