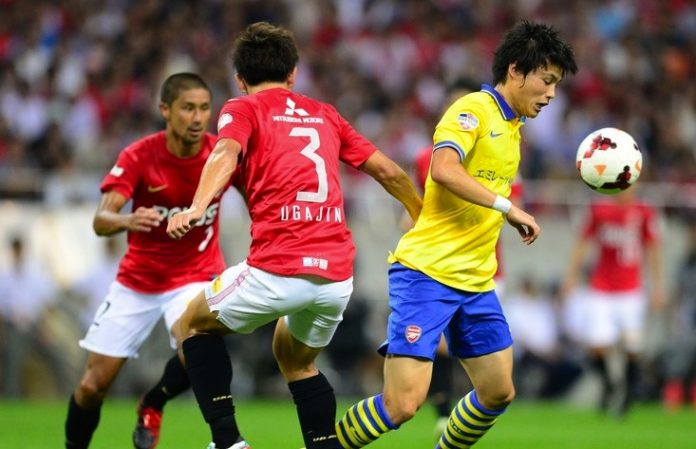 Arsene Wenger has been impressed with Ryo Miyaichi’s performances during the tour of Asia and suggested the Japan international could remain with Arsenal this season rather than head out on another loan.

Having allowed Andrei Arshavin to leave the club and with Gervinho likely to follow, the Gunners are currently short on wide options with the boss revealing that the 20-year-old could be an option should he splash his transfer budget on other areas of the pitch.

Speaking to Arsenal.com after the 2-1 win over Urawa Red Diamonds, Wenger, as has often been the case while in Japan, reflected on Ryo’s development.

“Ryo has done well, you could see that he is finding his sharpness back. He was better here than in the other game [against Nagoya Grampus] and he is on the way up. He is fighting for his position like many players. I like his game.”

After a long spell sidelined at Wigan his penalty against hometown side Nagoya and his cameo appearances in the rest of the fixtures will no doubt do Ryo’s confidence a lot of good. That being said you get the feeling a season of regular first team football is absolutely vital for him to take his game to the next level and that Arsene’s comments are mostly a polite attempt to give the local press a positive headline.

Another young talent, Serge Gnabry, was also on the receiving end of some warm words of encouragement.

“He was very good as well,” continued Wenger. “He is 17-years-old [actually 18] and he has a presence, power, good technique and can play on both sides. He is a very interesting, promising talent.”

All in all the Asia tour has been a roaring success both on and off the pitch. In addition to Ryo and Gnabry, the likes of Chupa Akpom and Gedion Zelalem have also acquired invaluable experience while the squad as a whole appear to have enjoyed the chance to bond.

The squad have already begun the long journey home and will likely be given a couple of days off to rest before turning their attentions to the Emirates Cup in eight days time.

Even if we don’t buy anyone think we should loan him. Got great potential and needs to be playing regularly instead of the occasional carling cup and FA Cup games.Hopefully we will loan him to a PL side

Sorry to be pedantic Mr Wenger but Gnabry is 18 😉

Hey, can you tell us falcaos real age too ? Thanls

Speaking of LANS, can you imagine what the headlines would have been if Theo had brought his shooting boots today and buried all his chances?

I never realised that Tony Adams was French.

Wouldn’t mind seeing Ryo come on as a sub with 20 minutes to go. His non-stop running at tired defenders would be a nightmare for them. Ryo, Gnabry, Akpom and Zelalem have certainly repaid the faith the club have shown in them. They certainly didn’t look out of place playing with the seniors.
The future is bright.

No not LANS and its old now….give it up!

League cup could be an interesting watch this year.

Now that we’ve got rid of the deadwood who is going to play in it? Will we get a team of the kids, or will we see more 1st teamers drafted in? I’d like to think we’ll give it a proper go this year. It is a trophy, after all.

yep play youngster there, i was loving this cup only because we could see the youth causing maynhem to other team . last 2 year wenger decide to stop that , shame

Good stuff. He’s got bags of potential and has all the attributes to be a quality player. Plus his name makes him sound like a superhero

Miss the days when we played the kids in the CC some team too, guaranteed a cheeky chip by vela, Got to the final once in all. Good times.

keep Ryo and sign for us Suarez as well..!!!

It’s not right to have creeps like Suarez hanging around our young players. He might bite them or race them up.

I prefer to think of it the other way: That being around all our terrific players will change Suarez, not he us. I mean, one day with Cazorla and Arteta would make any man better.

So we lost out on Higuain,Suarez & Villa and the compensation is to keep Ryo.

…. and the rest is history!

If ryo want first team xperiance by loan, i can speak with boss of preussen muenster, but presussen muenster is provides only accomodation and food stuff.Arsenal have to pay wage.

keep Ryo but get Berbard too

Please. None of us even heard of the guy until a week ago when his name got splashed all over the tabloids. Even having Ryo, Aneke, Gnabry and Akpom on the bench would give us more firepower than we had at times last year.

I’d heard of him, he’s a quality player. Whether he’s what we need right now is a different issue but getting him would definitely upgrade our squad.

I really rate him and look forward to the time when he’s regularly starting… while I’d love to see him stay this season and have some cameo appearances, it is probably best for him to go out on loan and get some proper game time in.

Having several substitute appearances after we are comfortably ahead and the opposition has effectively capitulated would really benefit the lad. I’m not being sarcastic here. I really mean that. Combine that with regular league cup starts could boost his confidence.

Now all we need to do is work out the trick of being comfortably ahead. It’s a while since we have done it.

It’s clearer now that the “Gonzalo Higuain” Arsenal fans have been waiting for has joined the Club – he is none other than Ryo Myaki! It’s another stark reminder that perennially lying duo i.e. Wenger and Gazidis have now mutated into DICK-HEADS or better still – PIECES OF SHIT! I wonder what it will take these IMBECILES to get out the London Club!!

Anyone else think this summer will end with no major signings?

I am curious: if we look at the past couple of summers, how many times has this type of sentiment come up? Invariably we do end up with several new players at the end of the window.

So just a small topical question, though not about Ryo…

Did Saint Bernard arrive at the Emirates for a medical today by any freakish intersection between the Press Transfer Rumour Imaginings and Reality?

If he did, was anybody there to meet him what with everybody, including the tea lady, in Japan?

Gunnersaurus was there, and he gave the little guy a high five and a big, big hug.

Yes, as we already have him that is true. More money to spend on new players. I totally agree with you on that point. Great innit?

carrol , downing,torres,veron, expensive …your point is

Am I the only one who wants to see more of Eisfeld?

No!.. I’d love to see a whole lot of he and Gnabry this season. Think they could really surprise a few teams

I too would keep Ryo with the squad. Need to be careful though because sadly, some pricks will try to kick the shit out of him over the course of a season. *Blogs – I love the site but have found the process of typing comments, in the appropriately titled comments section, to be a bit laggy at times. As though the comment box can’t keep up with the speed I type (not fast ) Could just be my computer as this has continued ever since I became a daily reader ( 2 summer transfer windows ago) to the present… Read more »

With Akpom Sanogo and Giroud do we really need a striker? it’s at the back where we seem a little light.

Mrs Bendtner's Greatest Son That Ever Lived
Reply to  Bucks

I always knew you had a sense of humour

he has to stay, we have a tiny squad, in reality “three” additions is not enough, “world class” or not. We will be playing in four competitions, this is a numbers game….

He needs to stay,he’s ready. He will do well in cup games. Our midfield area is looking good. We need some quality in at the back and a prolific goalscorer! Then it’s game on.