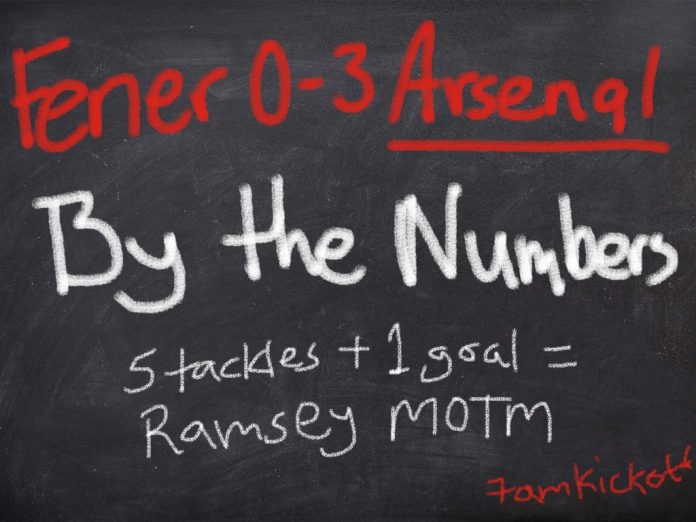 0 – If stats don’t exist for a match, did the match happen?

Funny thing about Champions League Qualifiers, some stats outfits don’t record the data: for example the folks who do the numbers for ESPN. Not sure exactly why this is but it highlights a frustration about where we are in terms of football data these days.

The good news for us is that two other outfits collect data, Opta and whoever does the numbers for UEFA. Let’s take a look at what they have to say about yesterday’s overwhelming win over Fenerbahce.

1 – Arsenal’s Wojciech Szczesny received Arsenal’s only yellow card, for time-wasting, as he went to retrieve a new ball from the ball shaggers behind the hoardings. I vaguely remember some other Arsenal player getting a yellow card for time-wasting in an important game. You’d think Arsenal were the Stoke City of the Champions League the way we seem to collect time wasting yellows.

These are UEFA’s official timing numbers. So, can someone tell me why, if there’s 27 minutes of a match (this was not unusual by the way) where the ball is not in play, the official gave Szczesny a yellow card for “time wasting” for taking 10 seconds to get a new ball?

One last thing: depending on where you look, you will see that Arsenal controlled 52% or 56% of the possession. This is because different places count possession and time differently. For example, according to Opta, Han Solo once did the Kessel Run in 12 parsecs and according to UEFA Jabba the Hut won the rights to host Euro 2040 on Tattoine. It’s all in how you measure time and possession.

I really hate this time of year, have I mentioned that yet? It’s summer but you can smell fall approaching and for some reason UEFA thinks Arsenal got a ton of shots on goal. Arsenal put in a decent performance but I don’t think they got 10 shots on goal, unless we are counting some of Theo’s cross-cum-shots. Can I say cross-cum-shot and get past the NewsNow filters?

This week has been Szczesny in a nutshell: one wild match and one match where he makes great saves to keep the clean sheet. I went back and watched all of the matches again last season and sure enough he’s just inconsistent like that. His inconsistency is why I can say that he had a great game in terms of saves and distribution (10-14 long balls, not all just kicked out to Sagna) yesterday but Arsenal still need to buy a keeper and Szcz can compete for the starting spot, like de Gea did at United. If he’s good enough, he’ll win.

11 – Arsene Wenger has won 11 out of 11 Champions League Qualifiers.

Wenger has been to the Little Dance 11 times now and has won every single time. Arsenal’s goal dominance in those matches is 27 for 3 against. Pretty good! The other good news is that Arsenal can rest players for the next leg and bring on some, uhh, erm, Eisfeld?

Ramsey led all players in tackles (5), interceptions (3), and passes (79), and also managed 2 key passes, 1 for 1 through balls (for Theo’s assist), 5 of 6 long passes, 2 dribbles (one was such a lovely turn!), and was dispossessed 0 times (he did have 2 turnovers). With the exception of the goal, it was almost the same statistical performance as against Aston Villa. It  is a bit early (statically) to call him “a stature, a physical presence” in midfield but that didn’t stop Arsene from indulging in a little hyperbole!

Ramsey worked well together with Jack and Rosicky with the latter being the number one pass combination for Arsenal.

9 – Olivier Giroud has now scored 9 penalties in his career.

When Arsenal won the penalty, though, I thought for sure Theo would take it and much to my surprise it turned out to be Giroud. Olivier blasted the ball into the top of the net. It was a brash penalty befitting a man who has never had a penalty saved. Really? 9 for 9? P.S. Nope, he’s missed penalties. Can’t we get one database with the correct information in it? One place to look instead of 1000?

That’s a lot. Like a crazy number even against a team who were as awful as Fener were yesterday. To give you some context, Villa rotationally fouled him on Saturday to ensure that he was only able to complete 2 dribbles against them. So, while Ramsey gets the MOTM gong, his teammate in the midfield was also instrumental in pushing the Gunners forward getting an assist and leading the club with three key passes. P.S. Just noticed that Wilshere was fouled 8 times and completed 2 dribbles v. Villa and completed 8 dribbles and was fouled 2 times v. Fener. Odd.

You re-watched every match from last season?!? That’s commitment. I salute you.

You did get past the NewsNow filters. Giroud had a penalty saved when he played a cup match for us against Coventry City just as he joined us.

Waiting for cross-cum-shots to take the pr0n industry by storm.

Number of spurs fans who thought the “power had shifted” only to realise they are still in our shadow…..who cares!!

They’re going to smash you on the 1st.

It Is What It Is
Reply to  iain

If by smash you mean the score flashing up on their black and white TV with their teeth you’re bang on the money sunshine.

I love arsenal I really do, so please buy some players i really pray

Meanwhile at Wenger’s latest trip to the supermarket
http://www.gifti.me/i/WXUfOieY.gif

Or am I missing sarcasm? It’s too early for sarcasm. I need coffee.

@andy_murray: Think arsenal deserve some serious praise for the way they handled that match…

0 – the number of players affected by pathetic fans who tried to disturb Arsenal at their hotel.

2 – The number of serious head cuts sustained in as many games. Weird..

5 – number of top top quality players we will get after this this match or else?

Parsecs is a measure of distance not time

Exactly, and master smuggler Han Solo and the Millennium Falcon flew it through a minefield which almost no one did (ie. the shorter route) and thus 12 parsecs is still a valid measurement of his record.

So I’ve heard at least… In reality, George Lucas probably messed up yeah.

Not a minefield, it was a cluster of black holes called “the Maw”. The “Kessel run” is (or rather “was”, because it has been a long time ago) the 18 parsec route from Kessel to Hutt space and Solo shortened it by flying dangerously close to the Maw…
Yeah, I know that I’m a horrible nerd and I’m even proud of it…

Damn. I meant “asteroid field” as well, but know thinking back that’s of course from the first film. Good knowledge, Master Floda.

Second fillm*… having a shocker today.

36 = number of years Lucas and his minions have tried to justify it as not wrong rather than just put up a hand and just say: ‘ sorry guys we screwed up’.

It’s all relativity really….
Thank you…

I love when jenks cuts in an takes a crack with his left! Long may it continue!

Giroud missed a penalty against Coventry in the COC last september! Keeper saved it.. Arsenal won 6-0.

Good read, but…. seem to remember us scoring a pen away to Udinese? And didn’t Giroud miss a pen against Coventry in COC last season

Should of researched that first lol, my bad – di natale missed a pen didn’t he

The Coventry score was 6-1.

Fenerbahce 0-3 Arsenal: this is a good thing | Arseblog … an Arsenal blog

The fool of a Took

Heh, what comes around goes around.

Giroud has missed a penalty. Last season against Coventry in the 6-1 home win, his penalty was saved.

excellent stuff and certainly didn’t seem like 10 shots to me.

loved the signs of more intuitive interplay between cazorla, wilshere, ramsey,and rosicky. santi trying to banish some demons out there. szcz with nasty-looking vampire neck. nacho-nacho man on too! awesome.

and if theo could properly shield, pass and generally look after the ball better he would be 90 minutes of dynamite. right now he’s more like 15 minutes of firecrackers.

Welcome back 7am kickoff (tim) i’ve missed you and your brilliant work. The season has now officialy started

I don’t buy this idea that fenerbache are crap… They have a lot of good players … Emre, morales, etc and are capable of giving anyone a bloody nose.
We made them look poor… As we did villa… We just had a less biased ref last night… And Chesney was a close second motm as he pulled off 3 excellent saves that effectively closed out the tie

They missed the nose, but they gave Koscielny a bloody forehead and Szesny stud-imprints on the neck… Despite their good players, Fener was terrible last night, no comparison to last season. We looked much better, because they just weren’t able to exploit that gap between our midfield and defence and go on the counter attack, like Villa did. That gap is still there, because both Ramsey and Wilshere are more comfortable farther up the pitch. We still miss Arteta patrolling that crucial area to close down the gap and make interceptions. But still, it was a very good game and… Read more »

Possession stats can be funny things. Last season, in the Stoke match where they barely touched the ball the BBC reported possession as 53-47 in their favour. I can only think they counted Ryan Shotton’s two minute throw-in routines and other Stoke set piece dawdlings as time they had the ball. Since Arsenal tend to take quick free kicks and throws it seems the BBC stat method will always underestimate our possession.

Has anyone mentioned the blue shorts? The looked quite nifty, our whole kit reminded me of the Union Jack! I think we should wear blue shorts for the rest of the season, you know, like a substitution for fan lucky underpants!

I’d like to see shoulder pads incorporated into the kit coupled with a pair of sling back shoes…….give us that 1980’s Wall Street look.

If i remember correctly, Giroud missed a penalty against coventry city last season

A Pinch of Salt | Indian highbury

[…] Szczesny made only 2 saves during the entire match, taken from the excellent Arseblog’s piece ‘By the Numbers’. Despite crediting Fenerbahce for a substantial portion of the result, I would like to highlight a […]