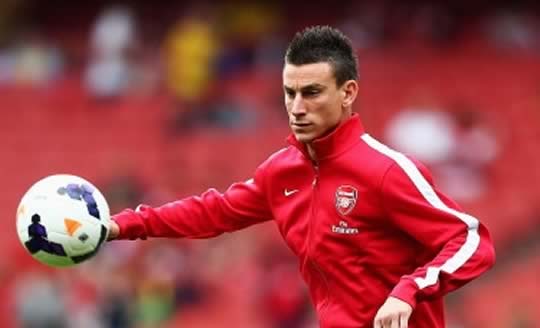 Laurent Koscielny is back in the squad for tomorrow night’s game against Fenerbahce.

The French international was taken off during the first half of the first leg when Pierre Webo tried to kick his face off. There was an initial fear that he may have suffered a skull fracture but thankfully he just had a massive gash.

That’s been patched up and he’s ready to take part having missed the weekend’s 3-1 win over Fulham through suspension.

There have been no further problems since the Craven Cottage win and Arsene Wenger is set to pick the majority of the team that played in that game.

“There will be stability in the team – 95 per cent of the team that played at Fulham will play,” he said. Of course, he doesn’t really have a great deal of choice given the lightness of the squad, but there you go.

Wenger revealed he was expecting a tough game, saying of the first leg, “It was not as comfortable as it looked on television. It was highly-committed.”

Arsenal take a three goal lead into the game so could put it to bed quite quickly. Let’s hope so.

is he back for Spurs? Can’t remember if it was one game or more for the Villa red

I think its one game ban for 2 yellows…

i am just waiting for him to take one of his acrobatic leaps and smash the ball into an opponent’s face, or better even, into the git’s face who was the refree in the vill game, the next he refrees one of our games…..

and i forgot that man webo…….

Heard he got demoted?

Would certainly love to see 2 or 3 young guns given a chance. Arsene should know how to do that and at same time not affect the balance of the team (in terms of youth : experience ratio)

Its such an important game that we need a full team and put it to bed with an early goal or two and then he can make changes. Starting a young team may put us on the back foot and with the home crowd could easily turn sour. Lets get over the line then give youth a run out..

the point about the home crowd is an important one………… usually, we can expect the arsenal home crowd to get behind even the youth players whole-heartedly……… and they wiil do that tomorrow too…….. but in this cirxumstrances, if the plan backfires and fenerbache put two or three past us before half-time, the environment wouldn’t be the best place to play footbal for the rest of the match………

Does anybody know if Zelalem would be the youngest ever Arsenal player if he were to play?

He turns 17 in January. I think he could be if he started soon. He will easily be Arsenal’s youngest player in the Champions League if he played today.

i know that wilshere made his debut for arsenal at 16, so………

He would be 16 years, 214 days, which would make him the 3rd youngest player of all time in the Champions League, and Arsenal’s second youngest in a competitive match after Cesc, who was 16 years, 177 days for his Carling Cup debut.

He also has 42 more days in which to take Wilshere’s position as the youngest to a league debut and/or second youngest to a competitive debut.

My concern is that Fenerbahce have nothing to lose. They will still give it a good go tonight. They may go “full thug” on us. If we get a couple more goals we might be tempted to bring on some youngsters, but if we are that far ahead then I am worried that the Fenerbahce players will try to kick us off the pitch out of spite. It’s not like they are going to have to pay for it in the near future. I would be very hesitant to play the youngsters, even with a big cushion, until the end… Read more »

i think u are worrying over nothing… at this level, footballers refrain from being that childish because they want to retain the respect of their own fans and admirers… and its not like they are spurs… in a rivalry fans forgo their players for playing dirty, but otherwise, i don’t think so…

“He just had a massive gash”

What you did there, I see it

John Thomas Littlejohn. He doesn’t like massive gash. It’s like chucking a woodbine up the Dartford Tunnel, as they used to say.

Great to see Kos back in the squad, not so much for this game but knowing he is ready for the Spuds was the bigger concern! I think keeping a stable team at this point in the season is good for continuity, none of the players should have any real fatigue, and it will do players like Ramsey and Giroud the world of good to continue their form into this game and the Derby at the weekend, we should have this wrapped up by half time, then make a couple of changes to keep players fresh. Who knows, we might… Read more »

not a proffesional footballer

He’d be kicked in the goolies in the first 2 minutes. If he starts then I hope to hell he’s tougher than he looks.

tbh i dont wanna risk him in a return so fast when we dont really need him to see out a 3 goal lead, let the man rest up

I’d at least want Kos on the bench. If we lost Per things could get plain weird.

Is he eye banging that ball in the picture?

And what do you guyz think of sagna at CB, maybe the problem isn’t a new CB afterall! get a RB instead ey?

Problem is we need sagnas steel in the side each week so a mere cover CB would be degrading to this wonderful arsenal servant.

I think Sagna shud be moved to CB and given a new 3 yr contract. That way we can utilize him more and we are in desperate need of a good player in central defense who can read the game, can tackle, can head, and be quick on the ground. Arent they decent enough starting requirements for a top CB? Getting a good RB should also be easier, safer and economical than getting a good CB who can fit in and not cause too much collateral damage in the interim. We’ve converted wingers to strikers, time to convert fullbacks to… Read more »

Surprised he is back so soon after Wenger said it was one of the worst cuts he’s seen in football; does anyone know how many stitches he actually had?

The medical staff said it was one of the worse cuts they’ve ever seen, don’t think it was Wenger.

Imagine………if everyone wrote like Harsh………the full stop key would wear down pretty quickly……..

if 95% of the same team plays that played against Fulham, does that mean that only about half of Kos is back so half of Jenks is on the bench and half of him is poked on 50% of Kos?
cos 95% of 11 players is about 10,5 players.

Wenger confusing as ever:/

which leaves a question, is it sensible to put half a player on the bench? maybe it’s best to leave 50% of Jenks in the stands.

Was going to post the same thing, PhD in economics, clearly not in basic maths.

and it turned out to be really saggy too.

Reading 4 arsenal 0 after bout 35 mins… 2 or 3 before halftime might be a stretch but hardly impossible.

Especially if we start with Sanogo up front and Fenerbahce target him. They’d love to waste one of our substitutions by forcing us to rescue him from the nasty men.

We are talking about him being a granny shagger right?

“…thankfully he just had a massive gash.”