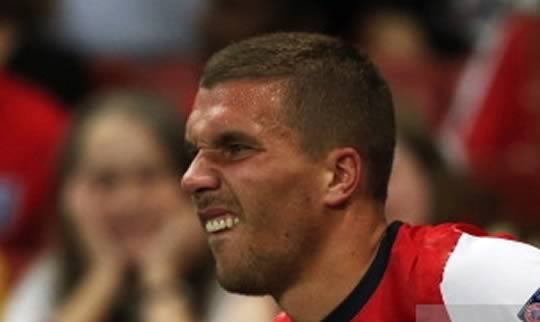 Arsene Wenger has confirmed that Lukas Podolski will miss the North London derby, and at least three weeks, after picking up a hamstring strain against Fenerbahce this evening.

The German international pulled up early in the second half and was replaced by Kieran Gibbs. Afterwards, the Arsenal manager said, “That’s a negative of tonight. We paid a heavy price on the injury front because we lost Podolski. He is out 21 days.”

There are also concerns over Aaron Ramsey who left the field early with what was suggested to be a groin problem, although he did appear to be moving freely after the game.

Jack Wilshere, who found himself targetted quite deliberately by the visitors in the final quarter of the game, may have an ankle problem but both he and Ramsey will be assessed properly tomorrow.

Good job Sanogo and Ryo got some minutes then

It’s a shame Dench didn’t get a run out.

Hope it is nothing serious.. But we are surely going to miss Poldi’s lethal finishing.

We surely will. We’ll also miss out if Santi is moved out wide, he’s been absolutely scintillating through the middle.

Not like you to be giving out, Dave from Newzealand.

Podolski was great today. Even he did not score his passing and control were brilliant. And he got us the 2nd goal. This is just plain sad when everything had been going good.

I dont think he was great today, but he wasnt bad either. He worked hard and ran too fast than usual which got him the hamstring injury and he didnt get us the 2nd Goal it was Gibbs who gave the assist.

I think he meant the first goal, which he set up with a wonderful run and pass for Theo.

Ramsey and Wilshere will be fine in time for sunday I guess.. but Pod’s a big miss especially since there is no Chambo as well

Very true – but was I alone in thinking that the Monreal-Gibbs partnership worked extremely well? Both have fantastic technique, they’re good crossers, they rarely lose the ball, and they would obviously work well defensively. It’s got to be a good option in case of injuries.

Gooner of Navarone
Reply to  Redondante

In fact, I think Wenger mentioned that right after he signed Monreal that both he and Gibbs can play together. Gibbs is a decent attacker.

Gibbs is good in midfield, but has nowhere near anything like the finishing that Poldi has, who can also take free kicks and 100% German efficiency in penalties.

and since when Does Walcott know how to place free kicks, since when can Ramsey finish superbly. Wenger out now!!!!

Wonder How much the Spuds paid Fener for those challenges on wilshere?

Player finds their form and is suddenly struck by injury. Sounds like the arsenal way.

A case of the Diabes

Fenerbahce should lose their case and be banned next year just for the shit performance they put in and for fouling our players instead of playing football.

Gooner of Navarone
Reply to  brooklyngooner

Our team could be a little experimental come the derby then! Let’s hope they get themselves fit!

I would love for this group of players to thrash Spuds and their new signings. (Even they admit that they have signed too many players) And then shortly after, Arsenal announce 3-4 top quality signings.

I can’t seem to understand why bruno alves didn’t get a yellow card given how much he abuse Willshere tonight.

Especially strange considering it was a Spanish ref. In Spain you’re not allowed to breathe too hard on an opponent.

Great to be in it again but are we serious contenders? No

Will we invest in order to improve our chances? No

Easy with the optimism there, buddy!

Hope Ozil is registered in time for Sunday then

Does that mean Ryo will get some game time?

No, anything else miss?

Surely we won’t play the Gibbs/Monreal left flank. So I think Cazorla will be moved out to the left and Rosicky will drop back in the hole for the Spuds game.

assuming we dont make any additions beforehand…which would be fucking madness.

With all these injury news after this game, we can assume transfer day deadline deals looming in typical Wenger fashion.

It would have been better to start ryo or/and nogo. That’s when young players play with a sense of urgency. But when the jobs already done. No pressure, no problem, let’s take a walk.

A couple of signings (Two being optimistic) just to have on the bench for Sunday are needed.
Listening to those clowns tonight on ITV was a struggle, every commentator keeps saying we need players, but they all have different opinions on what we need.
Mainly because they’re all a bit tick frankly

Ian Wright a clown your a tool

you mean the same ian who left us cause he didnt like eating brocolli ?

the one who went to benfica after we won the double ?

the one whose been talking shit about arsenal ever since wenger rejected his son ?

you mean the one who couldnt get a job in football after his playing days and gets handouts from media to talk shit about Arsenal ?

yes he is a clown and should keep his mouth shut.

‘2 to 3 weeks’. damn. Its these types of performances that give confidence to future run outs and i think Poldi did alright in terms of turning and running at defence/ taking initiative. Probably his best overall game this season.

Hmm rambo and jack both out injured, i’ve heard that arsene joined in the training game and was decent in the middle. Maybe the utility man he is talking about…is himself!!!

I’m sorry but looks like this is the only way we are going to buy players, no panic buys the man has got 5 day to go about his work and recruit some quality players.

RAMBO is Possessed at the momment

We are looking into bringing in a very special exorcist before monday. Of course, we will be discreet about this…

RAMBO is Possessed at the moment

Would have not said this 6 months ago, but damn we NEED Ramsey. The guy is in the form of his life.

Lets see how we do against the first decent team we’ve played in ages on Sunday before we start passing round the bubbly shall we? As for big signings they are none coming none. Wenger out!

The future of arsenal’s midfield lies with wilshere and ramsey, great to see rambo playing so well and wilshere will soon be back to his top hopefully, wenger should try to protect them like precious gems

This core of players with a few real stars and a few quality squad players could achieve some great things. Fingers crossed additions are acquired.

What took us so long to enquire for toby anderweireld? Wow all the ramsey haters are now crying out for ramsey, i just wonder how the people who believed in him even after the early periods of last season would feel..e.g ME, well i feel like my instincts always proves to be the best. Ramsey apparently worths £35m now, hey! Do not spread that price less you recieve a £40m bid from bayern munich or utd..LOL. Coyg

Even Ryo did well with a wicked cross across goal to Jenks! Poor Jenks – who is still gagging for his 1st goal in an Arsenal shirt – couldn’t have made contact any sweeter but nice save by Turkish GK. Sanogo good effort but you gotta hit the target son. Wish Gnabry would’ve gotten a chance to come on as sub today as well. If Wilshere and/or Ramsey do miss the NLD then Gnabry’s got a role to play against Spuds. Sep 1st is NLD < Sep 2nd is transfer-deadline day. Sadly it looks like our player purchases depend on… Read more »

On the bright side (relative to our dark summer lol) we have made the champions league and all our injuries are happening in the transfer window to gives a quick up he bum and become active.

I think that chap’s name is Podloski. Or, er, maybe Podolosoki.

Ok! Wenger said nothing will be done before this game, and nothing was done. Dick is in town, now let’s get things done like we mean business.

No more low-balling and derisory bids.

we need Rooney, fellani, and a decent keeper

Fuck me we could really do with Poldi on Sunday, getting stretched now. I’m confident of a win still but it won’t be easy, Santi out to the left and Rosicky back to tip of the midfield three..

I fear the scum….help me.

Seriously wtf was going on with the assaults on Wilshere. I know he always gets targeted but in a dead rubber like tonight? Why potentially ruin/adversely affect a fellow professionals career like that.

I was sat with a spuds fan this evening (I’m a whore where beer is concerned) and he seemed so disorientated. I don’t think he knew you could watch football on a Tuesday. Bless

Funny how people get excited over a fuckin shit team like Fenerbache,we finish the game with less players than we started,plus we got those dicks from down the road this weekend,marvelous, so new signing, squad is as thin as ever what a joke,we better win over the weekend or wengers nuts will be well and truly roasted in the press and by the fans!

Mind u if we lose at least he will 100 percent bring out the cheque book.

oh i forgot the apes for sale ahah nice one

Sanogo did well with passes for Ramseys 2nd wonderful goal

Silver lining about Podolski, might only miss one PL game with the interlull after the Tottenfuck game

We’ll miss the power of that left foot!