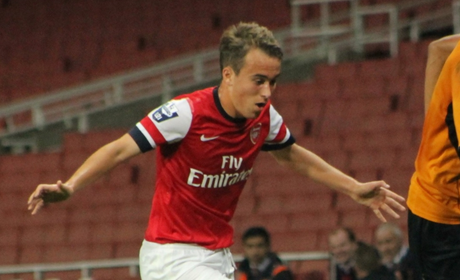 Confidence, particularly when it comes to young players, can be a rather useful trait. One player who certainly possesses much self-belief at the moment is Arsenal striker Austin Lipman, who, having scored six goals in the whole of last season, has achieved half that tally within the past seven days.

If you were to ask several Arsenal supporters to reel off a list of the most exciting youngsters at the club you would expect them to respond with names such as Serge Gnabry, Gedion Zelalem and Chuba Akpom, but, although Lipman is not as well known in general football circles as that trio, he is now beginning to gain credit for his hard work and perseverance since joining the club as a six year old.

Having earned his first professional contract shortly after he turned 17 last September, Lipman had to be content with a place in the U18 side for much of last season whilst Akpom enjoyed a superb campaign as the regular striker for the U21s. However, this season Lipman has been much more regularly involved with the elder age-group, with the 18 year old turning in a hugely impressive performance during the goalless draw at that level against Fulham before scoring the winner with a superb strike after coming on as a substitute against Wolverhampton Wanderers at Emirates Stadium on Monday.

That goal came less than a week after he scored a sumptuous brace during the 4-1 victory over Napoli in the UEFA Youth League, and the erstwhile England U17 international certainly seems to be enjoying his football at the moment.

At present he is forming part of a new-look Arsenal U21 side that remain unbeaten after their first five games of the season. Stefan O’Connor, a centre-back, and Ainsley Maitland-Niles, a winger, are two first-year scholars who have bedded into the side well, whilst defensive-midfielder Glen Kamara and left-back Brandon Ormonde-Ottewill have also adapted seamlessly to playing at a higher level.

It is perhaps easy for the youngsters to get carried away at this stage of their development where a call-up to the first-team squad for the Capital One Cup could be just around the corner. They need only glance at the subsequent careers of some of the recent Academy alumni, however, to realise that even those who were granted first-team opportunities can find it difficult to attract future employment. For all the success of some players, such as Jack Wilshere and Ashley Cole, there are many examples of individuals who struggle to make the grade in the long-term.

Goalkeeper James Shea, for example, came through the ranks at the club and made the bench for the first-team in all four senior competitions, including for the trip to Montpellier in the Champions League last season, but, after being released in the summer, has subsequently ended up at Isthmian League Division One North side Needham Market. Another case is that of Jay Simpson, the striker who scored the first ever hat-trick at Emirates Stadium in an FA Youth Cup fixture as well as a brace for the first-team in the Carling Cup. Fast-forward five years, however, and, having been released by Hull City in the summer, the 24-year-old signed for Buriram United in Thailand last week.

Any of the youngsters in the current set-up who feel that succeeding in football will be an easy ride need only look at the fate of Shea and Simpson to realise that it can fall apart all too quickly.

In fairness, Simpson reportedly got 40k a week in Thailand. Point well received though.

But then a beer is 40p there and everything is cheap.

I’d be pretty happy with 40k a month tbh

No, 40k per week. http://hereisthecity.com/2013/09/29/arsenals-first-emirates-hat-trick-scorer-finally-finds-a-new-clu/

Jay simpson is on 39k a week, so I’m sure he got offers from more known clubs, but instead went after the money.

Its fair to say he went baht sh1t crazy

Haha no Simpson is on 40k a month in Thailand. At least so I heard…

Id move to Thailand for 40k pounds per month.

red or dead
Reply to  mlh

He may be on 40k, but that’s because all Asian clubs overpay for players whom are not quite worth it.

Just look at the Chinese League.

I’ll always remember Lupoli. I had such hopes for that boy

Not only is the beer cheap,the food is great and cheap.The Thai ladies
are easily swooned by guys with stads of cash.

not to mention the Thai boys that look like birds

The ladies swoon over piles of cash everywhere. Thai girls just do it over smaller piles. £8.47 = yippee

Joined the club at six?! Geez, I better get my kindergartener ready for his tryout next year…

It.s actually going to be incredibly tough for any of our young pkayers to make the grade…with money to spend and a real need/desire for some silverware I think we will not be giving opportunities to any but the very brightest of prospects. I.d love too see lots of them make it but it is simply unrealistic…and then there is the bendtner/senderos prospect where a talented you g player gets handed a huge contract to keep them from leaving for another big club and then turns to shit..risky business..even Utd ( wankers! ) have suffered here..Pogba gone and Januzaj holding… Read more »

Arsenal should follow the Crewe Alexandra way. While we’re teaching these teenagers to play football we should also be putting them through the courses for the FA Level 1, 2 and even Level 3 (UEFA B) coaching badges. That way they will gain skills that could see them make a living through football even if they don’t make the grade as a player. If they do get a career as a player then having coaching badges can only make them a more rounded player, and a knowledge of coaching might even leave them a bit more level-headed as they would… Read more »

I’m struggling to think why two people thumbed my suggestion down. It doesn’t matter what club you are, or who your manager is, there are always areas in which you could improve. We have young players every year who show promise but don’t fulfill it for various reasons. Where do they go after they leave us? Could we equip them better than we do? I say we probably could. Crewe have a wonderful program for developing their young players so that they will have the maximum chance of forging a career within football. We could learn from them. It might… Read more »

‘It might not improve our own team in any obvious way, but it would be the right thing to do for our trainees’ – That’s why you got thumbed down Cyril! The post-playing careers of youth players who don’t make the grade is of very little concern to a fan, and it is even less interesting. My local youth club needs volunteers if you want to do your bit for the community?

The smart, modern Arsenal follower can’t see the less obvious benefits to Arsenal of having an enhanced reputation in the football world, and having players with coaching badges amongst those of our young players who do make it with us?

I thought the idea of doing things the Arsenal way, doing the right thing by all of your players, leading the way in football, and being the best Club around, not just the most successful, was the essence of being Arsenal and of being a Gooner. Maybe my time has passed.

Shame how some careers turn out. I wonder what happened to Jay Emanuel Thomas… JET. So much talent. And Merida.

jet signed for bristol city in the summer, hes having a good season.. the team arent tho 😛

“I can’t read, and I can’t write,
but that don’t really matter,
Cos I’m a Brissle City fan,
and I can drive a tractor.”

Merida turned out to be ‘mierda’.

If these youngsters keep working hard, have the right attitude, and have belief in themselves, wenger will take care of them.

Tell that to the ones we release every summer. As I said in an earlier post, we need to be giving these guys every opportunity to make it in football even if it isn’t with us. Not just training them to play football the Arsenal way, but putting them through the courses for the Level 1, 2 and 3 Coaching badges so that they have more than just playing skills. That raises another question I don’t know the answer to. Do Arsenal have an Academy for girls? Do we just buy our Ladies Team players ready-made or do we develop… Read more »

I thought the same but I think he can still make it if he actually gets some game time. I’m really disappointed that he hasn’t come of the bench yet this year and as our wounded return he’ll get even less time, but he is still young. If he keeps his head down (a little less youtube’ing and clubbing), works hard and doesn’t get discouraged, it’s still a possibility. I also think that when he opted for Ghana over England, he pi55ed AW off. Knowing that if he makes it and then get dragged off to the ACN every 2… Read more »

Always had high hopes for that young Danish chap called Nicklas Bendtner. Where does he play now?

Scored twice for Denmark last night. Have hopes for him yet if he can only bring some of that back to Arsenal when he returns.

He’s only out there for the yaba

This website uses cookies to improve your experience while you navigate through the website. Out of these, the cookies that are categorized as necessary are stored on your browser as they are essential for the working of basic functionalities of the website. We also use third-party cookies that help us analyze and understand how you use this website. These cookies will be stored in your browser only with your consent. You also have the option to opt-out of these cookies. But opting out of some of these cookies may affect your browsing experience.
Necessary Always Enabled
Necessary cookies are absolutely essential for the website to function properly. These cookies ensure basic functionalities and security features of the website, anonymously.
Functional
Functional cookies help to perform certain functionalities like sharing the content of the website on social media platforms, collect feedbacks, and other third-party features.
Performance
Performance cookies are used to understand and analyze the key performance indexes of the website which helps in delivering a better user experience for the visitors.
Analytics
Analytical cookies are used to understand how visitors interact with the website. These cookies help provide information on metrics the number of visitors, bounce rate, traffic source, etc.
Advertisement
Advertisement cookies are used to provide visitors with relevant ads and marketing campaigns. These cookies track visitors across websites and collect information to provide customized ads.
Others
Other uncategorized cookies are those that are being analyzed and have not been classified into a category as yet.
SAVE & ACCEPT
wpDiscuz
43
0
Would love your thoughts, please comment.x
()
x
| Reply