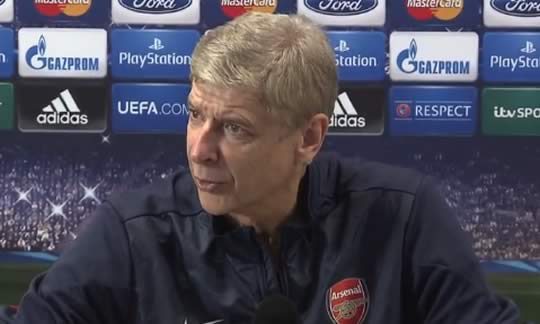 Arsene Wenger says it’s ‘unbelievable’ that Arsenal are not through to the knock-out stages of the Champions League after reaching 12 points with the 2-0 win over Marseille, but also that it’s a reality his team has to deal with.

Dortmund’s 3-1 win over Napoli means Arsenal have to go to Naples and avoid a 3-0 defeat to get through to the second part of the competition, but Wenger says he’ll send a full strength team to ensure the job is done properly.

“It’s unbelievable but it’s reality,” he said. “We have to finish the job. It is not an easy situation because you can think ‘OK, let’s just not lose big’ but I think that would be a mistake.

“We’ll go there, play in a positive way and try to win the game. Everything else would be a dangerous gamble. Having said that, Marseille will play the last game at home to Dortmund – they haven’t lost yet.

“They will have to turn up. They will be under pressure to at least take some points from this group stage.”

Before, he rushed a little bit. Now, he’s starting to think ‘what Ramsey can do, I can do as well’. He’s calm in front of goal and especially the first goal shows that!

“My comment about Aaron was a joke but I think that it puts in his mind that he has to score goals as well, certainly when you play football you want your midfielders to score goals.”

I’m 100% positive I’m being dumb, but when he said “Marseille will play the last game at home to Dortmund – they haven’t lost yet”.. Surly they have lost.. too us?

He meant they haven’t psychologically lost the game to Dortmund, because its not been played and they got to get something on the points sheet.

He is referring to the fact the game has not been played and everyone is writing Marseille off. If Dortmund do not show the same fight they did today they could be in for a rough afternoon.

Best performance I’ve seen from Jacky since returning from injury.

don’t forget his performance against WBA at the Emirates!

He was abysmal in the first half against WBA. Losing the ball, falling over, complaining to the ref.
I think it was the Benson & Hedges that he smoked at half time that caused him to calm down and score a goal.
Up The Arsenal

That was away game, and he had terrible 1st half

the only sam is nelson
Reply to  Mooo

He was immense tonight, wasn’t he?

So was Rambo. Again. They’re like Bodie and Doyle, but without the Capri or the guns or the fighting bad guys. And we no longer have Cowley after GG went, either. But apart from that, they are just like CI5’s crime fighting midfield maestros.

England v Brazil aside perhaps, but yep, he’ll get there. Remember when he first came back and was MOTM for about 4 games in a row.. Imagine when he gets back to that!

And some funky bastards only needs 10 points to progress! What a scrappy group we’ve found ourself in?!

Chelsea are through with 9, actually.

Sczc stopping everything, Wilshere curling in beauties, Ram-Ram drawing penalties outside the box with Bergkamp impressions, AND Thierry in the stands.. today was a good day.

This could be Jacky boy’s breakthrough season.. oh wait

The fitter that Jack gets, the better he will be. He is getting close to getting over the injuries both mentally and physically. He can only go from strength to strength, which is great news for Arsenal, bad news for our opposition! COYG

I love his energy and his quickness. It has been difficult to assess him fairly given he has rarely been at full fitness since ‘the injury’. Other little niggles have caused his performances to sort of be hampered since then, but seeing him today (and in the weekend, come to think of it) was like seeing a new Jack. He looked refreshed and energetic, and this coming off of the international friendly b.s.

As per our current performance,i am sure that Arsenal will take 3 points or draw in the last match against Napoli.Usually Arsene Wenger is cursed with affair related to players he failed to buy, i really hope and worry that the same story may not happen to us when we face Higuain during Napoli clash.From the first time i saw the group of death,i was hoping to reach at the final match after we already qualified.But,the last match is now the decider,away from home and there is a chance that Higuain may hurt us.let’s hope that at least we will… Read more »

masterofthegoonaverse
Reply to  gunner for ever

Still a really positive result for us, well done lads!

I am still confused why Chelsea are through with only 9 point????? Can somebody answer me?????

Well, they’re in a different group than us so obviously our situation is immaterial. It is ridiculous when you look at the quality of the teams in our group and how someone will miss out when others are going through but that’s how it goes.

They have 9 points. Basel and Schalke have 8 and 7 respectively (Bucharest are already out of it), with a game to contest. Therefore, regardless of Chelsea’s final game, it is impossible for those two teams to BOTH finish higher than The Scum.

Basically our situation happens when you have whipping boys such as Marseille in your group. I think Marseille (I could be wrong) were the top seeds in our group! Unbelievable really.

It does feel unjust that we have played this well in a tough group and yet Chelsea can lose (twice!) to Basel and still go through with a game to spare!

No Arsenal were the top seed

With Napoli in the position to have to really go for it, I like Arsenal’s chances to hit them for a couple of goals on the counter. I would think with the goal difference we have against them it should be quite enough to see them through. Glad to see that Arsene is going to be aggressive for the trip to Italy.

Ok know I am understanding , they have to play against each other that’s why fucking Chelsea goes through only with 9 !!!!! Fuck them we have shown our quality and we prove again.

So lose by less than 3 and we are through, correct? COYG!

Lose by less than three and we are through in second place. Draw or win and we win the group. Personally, I expect us to win the group.

Agree we should be winning this group now, given how we’ve gone to get where we are. As I see it, we’re definitely through in second if we lose by, say 1-0, 2-0 or 2-1. Not sure exactly how this mini league thing works, but Dortmund’s 3-1 win tonight gave them a high goals scored in the mini league, and we’d need to score at least 2 ourselves in a loss to have a chance of being top. So, all in all, seems unlikely. Best chance to finish top is a win or draw. There are few upsets in the… Read more »

I’ve just gone an read arsepedant’s post in the match report story – I appear to be wrong, his looks right – to top we need a win or draw, nothing else can do it.

We have a +5 goal different opposed to Napoli’s -1 – even if Napoli beat us, provided it is by 2 goals or fewer, we would still go through on top if Dortmund lost.

Not quite true. If Arsenal lose by 1 goal in a 4-3 or higher-scoring defeat, we will have the same GD as Dortmund in the mini-league and have scored more goals, so we’ll still top the group. Lose 3-2, and we have the same GD, goals scored AND away goals as Dortmund, so it comes down to head-to-head against Dortmund, and they top the group, we come second. If we lose 2-1 or by 2 goals, again Dortmund top the group, we come second. Lose by 3 goals or more, and we go out if Dortmund beat Marseille, or come… Read more »

This is fucking complicated

The only thing i’m not clear on is who tops the group if we were to lose to Napoli by one goal and Dortmund beat Marseille. As i understand it because we’re all on 12 points in that scenario it then becomes a mini league in which our GD and Dortmund’s would both be +1 with Napoli out on -2, so what does it come down to then, Goals For within the mini-league?

I still think when we’re away we can beat almost anyone besides manu, we just don’t have it in us to beat little boys…

We take the games one after the other, so next meal for the canons will be in the premiership and when it comes to those mafia, am sure the lads will do us proud. COYG!