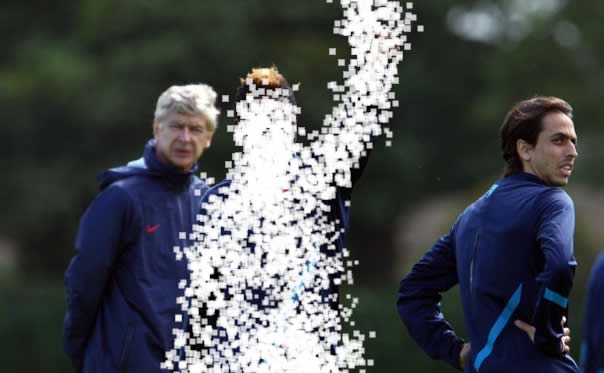 Arsene Wenger says he’s not against the loan system, but believes that players should be free to play against the club that ‘owns’ them.

Earlier this week, Jose Mourinho talked about the benefit of having Romelu Lukaku out on loan at Everton. The Chelsea boss, and one of football’s biggest twats, said, “I’m happy that he’s scoring goals against our direct rivals, and he doesn’t score against us because he can’t. But he’s there. It’s good for his evolution. It’s good for Chelsea because he belongs to us for a long time.”

When clubs with deep pockets can afford to snap up talent then loan them to another club knowing that player can’t have any impact on them, it does seem unfair, and that’s something that Wenger would like to see changed.

“Once you are on loan, it should be a transfer – you play for the club,” he said.

“You cannot play for the club only in 19 games and not against another club. f you ask me my opinion, I am not against loans, but you should be capable to play against everybody.

“Even if you want to loan a player and you said tomorrow you cannot do it any more, you always find people can sell a player for one year with a buy-back clause and get the player back, but then he can play against everybody, that would be a bit more normal.”

Of course there is the issue of what happens when an on-loan player misses a sitter against ‘his’ club. Is he accused of doing it on purpose, or did he just Chamakh the chance?

It’s a complicated one, but Wenger’s solution is probably the best and fairest.

My opinion is there should be restrictions and players over the age of 20 should not be permitted to be loaned to another club playing in the same league division.

For instance when Lukaku was sent on loan it should have been to a club abroad or a lower division in England. In other words, away from a position to offer direct influence on the parent club.

The loan market is a valuable way for clubs to assess young players, however mega rich clubs are going beyond the parameters of nurturing talent.

I think that this has the balance about right. Loans are a good way to help develop a player, but were not designed just to park them somewhere until you need them. — Half the point of the squad size limit is to stop clubs hoovering up players just because they can. Loaning them out as it is helps that situation, and the new club even pays part/all of their wages. I’d have to admit I would go a step further and allow more formal feeder club rules (like the Barcelona B situation), but I know that’s a whole different… Read more »

I half agree with the boss. It seems unfair when money grabbing behemoths like Chelsea take advantage. However, this is the main incentive that keeps the loan system working. Changing it would be very complicated.

Yeah would love it for Lukaku to stuff those dirty chavs.

Every Chev loanee players should play against the parent club. No more cheating by Mou

By any chance is that along that’s. Edited out

I say let the club themselves decide if the loanee should face his original club. I believe in the case of Arsenal, when we loaned Wilshere to Bolton, and Miyaichi to Wigan we expected them to play against us, as it is a good chance for the youngsters to be observed by Arsene.

But in the case of Benayoun, he is a seasoned professional and I can understand that he shouldn’t be playing for us in games against Chelsea.

It all boils down to the situation, I think.

Team A loans Team B a player.
On the last game of the season, they play each other for a Champions League position.
The loan player could then feasibly knock himself out of the competition.
Dodgy conflict of interests.

The Skunk and the Flunk are being punked. Great.

Just another situation where the self-interest of a club goes against the wider interest of the game itself. Invent all the worst-case scenarios you want, a loan should be the same as a transfer, no restrictions, you play your heart out for that team. Or else why don’t we have restrictions on transfers where a recently transferred player can’t face his old team for a season or two? Sport is about fair competition, and this ‘quirky’ use of the loan system is clearly not. i think if the press stopped fawning over him, Mourinho would seem less odious. And flying… Read more »

Yet again, Wenger is talking bollocks. The current loan systems is wrong because, as has been mentioned, the loaned player can’t play against his ‘parent’ club. But this is totally right: how can a player be allowed to score against and therefore damage the prospects of the club which is playing his wages? And what happens when he just happens to have a bad game against that club? The integrity of the PL is the priority. But why should a player like Lukaku be allowed to hurt the other teams in the PL but not Chelsea? The answer is, of… Read more »

eh long time no see? good to see you are still around

If players can’t be loaned out to other teams in the same league how exactly do you get your young players first team experience in your league? So what if a player can play in Spain, this is England. I agree with Wenger on this one when a player is loaned out he is effectively that team’s player until the loan is done. I think the one year purchase with buy-back is a great alternative.

I think it’s the first time I’ve ever thumbed you up. Have to agree with you here.

Have to agree (but not quite the first time for me).

Have to wonder if people are down-voting the name or what the guy actually said.

In this case for sure, I really don’t see much of an argument. It’s fairly obvious that loanees should play in a separate league.

Agree completely, the conflict of interest cannot be ignored and places the player in an unacceptable dilemma over club loyalty. The solution, as described by FG, is to not loan within the same league, which I think is fair. That twat Moureen did his best to rub in the advantage of loaning Lukaku has to Chelsea, which burns Arsenal fans because we could use a good striker, we were linked with Lukaku back in the day, and maybe he could have played for us if Chelsea had not swept in with a killer contract. I bet Lukaku wishes he played… Read more »

good halftime results all round but unfortuantely its not the end of the match.. at least one of those results should remain the same and i will be ok with it.

lets all laugh at the skunk and Utd whilst we sit top of the pile, cigar in hand!

I must admit the style of big money in football has boosted big clubs & dented holes in small clubs esp the likes of c. Palace or barnet loans can be an addictive thing esp borrowing up stoke

we should have loaned chamakh now he can play against us in the league. He is on fire.

I was going to say only on fire in the sense that 3 goals in 15 games is slightly less pathetic than his Arsenal goal rate, but he got 8 in 40 for us……

got to step up and take advantage. tomorrow’s game just got more crucial

Beautiful irony in them losing thanks to a goal from a Liverpool loan player then, no?

Breaking News!!! Father Christmas is a gooner! Have been wondering why we keep receiving early christmas gifts every saturday and [email protected], City dropping points ohh I didn’t forget about United, in their case, a draw would have been perfect, just giving them that glimmer of hope that Moyes will come good. #

lol chelsea hahahaha u can keep ua home strong home record but away from home u cunts are gonna geddit! hahahaha…

The upside to Liverpool winning, is that they are in second, and so apparently we can beat our closest rivals 🙂

i was implying litterpool were shit but that works too….

Oh, completely agree, but I never miss an opportunity to kick the fuckwits, sorry pundits (always mix those 2 up).

Of course we’ve lost twice to mid-table sides, so we are clearly not good enough 🙂

Do we have a buy back clause on Chamakh!! 😉

Please don’t say Chamakh the chance. It’s a tad unfair to the CR7 lookalike. Moreover he’s doing well this season. Plus that cunt we all know about was a major reason he fell outta favour with us. He’s no twat. I like the sound of he Soldadoed that chance.

Ironically for Mourinho, the guy who scored the winner against them in the stoke game is loaned from Liverpool. Karma bitch.

Loan depends per club what they are comfortable with.

Some clubs are inherently fearful and won’t want their players playing against them.

others (like us) are confident enough not to be so petty.

Karma is a bitch Mr Mou…liverpools ‘loanee’ scored the winner against Chelski today. You couldn’t write this s**t. Top of the league!

“Of course there is the issue of what happens when an on-loan player misses a sitter against ‘his’ club. Is he accused of doing it on purpose, or did he just Chamakh the chance?”

For one crazy moment, I actually thought this was a Wenger quote.

Shame Chelsea didn’t loan anyone to Stoke, he Moaninho?

I agree with what Fatgooner said about lending to another division.

But what’s the ‘yet again, Wenger is talking bollocks’ attitude?

No difficulty whatsoever thumbing it down.

I do believe all of the ideas you have offered for your post. They are really convincing and will definitely work. Nonetheless, the posts are too brief for novices. Could you please lengthen them a bit from next time? Thank you for the post.