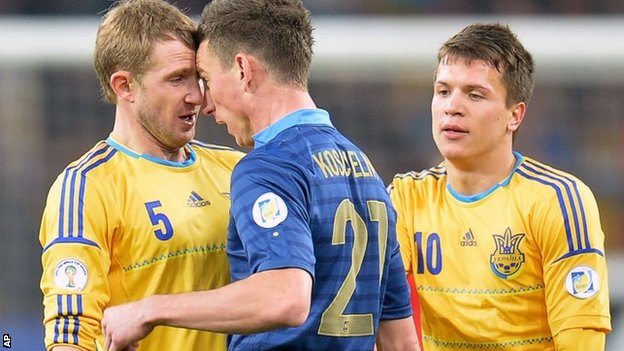 Laurent Koscielny’s chances of selection for France’s World Cup squad have been given a huge boost after L’Equipe claimed the centre-back will not face further punishment for his red card in Kiev during the first leg of France’s play-off with Ukraine.

Koscielny was sent off for a slap on Oleksandr Kucher (and subsequent argy-bargy) in injury-time of the 2-0 defeat and was banned from the return leg in which his teammates overcame the deficit to secure a place in Brazil.

Last week L’Equipe ran a story predicting Didier Deschamps squad for this summer’s showpiece tournament tipping Bacary Sagna and Olivier Giroud as ‘definite’ to travel but downgrading Koscielny to a ‘maybe’ given a potential extended ban. Thankfully for the Arsenal man he’s not been treated in the same way as Wayne Rooney, who missed the first two games of Euro 2012 following a retrospective punishment for a sending off in qualification.

The draw for the World Cup takes place on 8 December.

I am fairly confident that Rooneys ban was extended largely because of his ugly face.

FA must think he’s gorgeous because he got bugger all for booting that Cardiff player.

They must think hes cindy fukin crawford after letting him off with THAT dive and all the other crimes against arsenal.

remember the invincibles
Reply to  Double98

might’ve gotten naughty with the FA who knows. He does love a high-class slut

Now that Kos is almost completely certain to be at the show in June, that’s about all the motivation he needs to keep this form going right until we’ve won the EPL and UCL.

Show a bit of ambition man – the FA CUP as well

I hate it when people get a light slap and pretend like they’ve been hit with a brick. Looking at you Joey Barton…

Bould's Eyeliner
Reply to  Another yank

Yeah the acting skills could make a little boy sigh. Or maybe Bosscielny can Bruce Lee men to the ground with a wave of his hand. Imagine what it feels like to get tackled by him…. BEAST

It’s good news and all, but how exactly does this solve all my Christmas present worries?

Or is this not that?

I won’t be surprised if Flamini also gets a call up to the WC14 french squad.

What country is platini from again?

It Is What It Is
Reply to  Jim Jimminy

First thoughts. The hand of Titi, now this.

Ramseydent – it starts on the 6th, but the draw doesn’t happen till the 8th.

Off topic, but is the Morata to Arsenal on a 6 month deal true?

What where did you here that?!!

I could imagine the face of a certain guy trying to take his place @ the WC right now. *sad stuffs for him*

I thought it was Paul Scholes

Gr8 news another good defender in the clear

Hope his tackles wont cost us any more penno.

the way the team presses and gets men back behind the ball when we lose possession means Kos doesn’t need to go flying in with last ditch tackles like last season.

So defence looks much better this year especially now that Flamini and Arteta are moping up most through balls through the middle and Bfg is handling all long balls very well too.