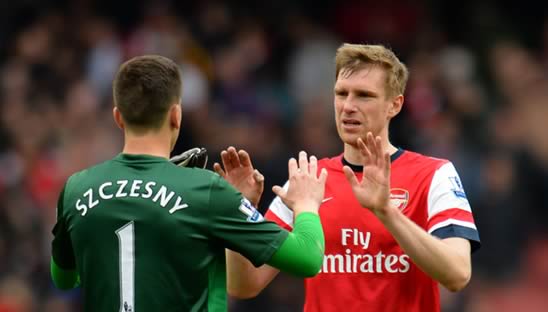 Despite a string of impressive performances, marked with some szczensational saves, Arsenal keeper Wojciech Szczesny has said the men in front of him are responsible for the team’s defensive improvement this season.

The big Pole has now kept 5 clean sheets in his last 6 games and is the in form keeper in the league, but he says playing week in, week out behind the same defence is a big help to him.

Suggesting that one of Laurent Koscielny or Per Mertesacker should be in the running for player of the month, Szczesny continued about the back four as a unit, “We have conceded one goal in November. We have been great and playing behind them is a pleasure for me.

“I have been working hard myself but the defence have helped me massively. It is smashing to play behind the same back four every week. You don’t know how important that is.

“Yes I am keeping clean sheets but I have not had many saves to make.”

When the likes of Thomas Vermaelen and Nacho Monreal have spent most of the season on the bench, it’s a measure of how well the defence has been performing and obviously Szczesny feels the benefit of that as much as anyone.

Still, while he might be keen to play down his own part in it, his modesty shouldn’t preclude the fact he’s been pretty important himself.

81% – Wojciech Szczesny has the best saves to shots ratio in the Premier League this season (min 16 shots on target faced). Polished.

Keep it up chaps.

I love this dude!

Nebuchadnezzer is a top goalie isn’t he?

shouts to his midfield duo (Aaron and Matthew ) too, also a quality

He said it was ‘smashing’. Who says smashing anymore?…crazy poles.

I dare say that one would not be leading oneself astray if one surmised that our dear old glove butler Sir Albert Sesley, like many a fine chap, has been having a jolly good time reading the Arsenal Gentleman’s Weekly Review.

Also, if he keeps up his current form, he can speak in Cockney rhyming slang for all I care.

“Gor blimey guvnor” (said the cheeky cockney stereotype) its a rum old do and no mistake when our Chesney as to use them blinkin new words….this geezer’s àvin a LARF

It’s one for all, and all for one!

Wojtek is the Man. COYG!

Per-ferct reading of the game by the BFG, alertness and agility of Kos and czczcsesetional saves by the big Pole. These are good times indeed!!

Stronger than the berlin wall

Keep up the good work.

Also, Sheherzczernehay seems to be becoming the keeper we all hoped.

Dunbar
Reply to  Loop A Hole

He signed a Terry stat with ‘Leader.’ yesterday…

the only sam is nelson
Reply to  Dunbar

funny mis-spelling of “cunt”, that.

Its not just the back four Mr Tex. Its the back five. You too have been immense this season and we are all glad you signed a new contract. Come May, you will be lifting the first of your many titles. I have spoken!

TV5 should be playing more, at least in this busy period. He’s proved enough in the man utd game to deserve more chances….

Right from the article, and I quote the Big Pole:

It is smashing to play behind the same back four every week. You don’t know how important that is.

Chopping and changing the back four just to keep Verm happy isn’t a good idea. If it ain’t broke and all that.

The first thing you learn in football is that you need players that are used to each other if you want to be successful. We have a good defense atm and we have to be happy that we have Nacho and Thommy as a backup. I don’t think they like their situation very much although Nacho is coming from the bench often. We should have good backups on every position. In my eyes there are 3 positions that have to get one more backup with high quality. Right back, central defender and a striker. I think Jenko is not strong… Read more »

He’s a simple pole in a complex plane

…on the subject of calculus puns..

poles and zeros!! this is exactly what we need

Mert and kozzer are playing with their man toys and having a right old giddy.

Vermaelen: Can i play?? (puppy eyes)
Arsene approaches and pulls Vermaelen away from from the two.

But they will need rest in this busy time. So Verm getting a game wouldn’t be a bad thing.

November was supposed to be our difficult month, The month were it would show who we are and if we had what it takes. We conceded one goal, yes just ONE goal in the whole month of November and have received ZERO credit from the pundits. And while many will say our real test will now be December with City and Chelsea, I say it’ll be just a big a test for them as well.

So long as we’re able to field our big-game midfield of Arteta, Flamini and Ramsey, in front of the first choice defence, we have a good chance playing any team right now.

Off topic:
Did anyone hear the commentators talk about Mertesacker? I forget who they were but one of them said “Big Flying German! Is that what they call him?”

szczensational indeed! Can’t believe I haven’t thought of that!

Agree with Pavan. In this period of fixture congestion it would be nuts not to give tv5 a few games.

Having a smashing time being a fan at the moment aswell. COYG!

Hope we sign Sagna soon to keep the back 4 together for longer.

It’s great for Gibbs as well.

It’s a tough one for TV5. Hope AW finds a way to play him without affecting the solidity of our defense – maybe while giving Giroud a break 🙂

So you’re suggesting playing Vermaelen as a lone striker? Not convinced about that, although he could probably do the hold-up-and-lay-off stuff just as well as Giroud.