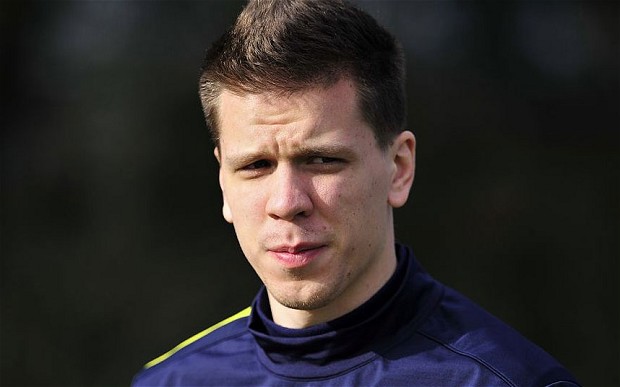 Although Wojciech Szczesny has been probably the best and most consistent keeper in the Premier League this season, the Arsenal number 1 refuses to take all the credit for that.

While acknowledging that his performances have benefited from ‘maturity’, he’s keen to ensure that the players around him get their share of the plaudits too.

In a lengthy interview on arsenal.com, Szczesny said, “I don’t want to take too much credit for my numbers and for the small amount of goals that we’ve conceded.

“I believe it’s more a matter of team shape and the defending of 11 players from up front to the back. Mikel and Mathieu and the back five have been fantastic. It’s not just me responsible for the numbers.

“They should take a lot of credit.”

He also spoke about having a back four that doesn’t chop and change every week is crucial to that consistency.

“It’s very important to play in a settled team. I only realised it when I started playing behind the same back four. It’s much easier to read the game when you know which players are a bit slower, who’s a bit quicker and who can recover.

“When the ball goes over Laurent’s head, for example, I know I don’t have to come out because he’s usually faster than most of the strikers.

“He’s got the pace to recover, plus we understand each other’s body language. It’s actually much easier.”

Szczesny won’t be in FA Cup action tonight, with Lukasz Fabianski taking over and Emiliano Viviano on the bench, but he’ll be back for Tuesday’s Premier League trip to Southampton, looking for another clean sheet.

What a talent… his maturity and skills are far beyond his years.

He always looks so calm.. Even after clearing a ball back to a certain strikers head and feet’s away from an open goal, all he did was.. you know.. hop around. Cool.

I would get his name on one of my shirts if he wasn’t a keeper. Ah fuck it might don’t anyway with one of the puma kits

Szczesny out Cesar in

When you’re trying to troll, do it properly!

No chance of that being a joke? I laughed…

You have said it all… can’t argue further… Wishing you more clean sheet if its to be wished… Only one AFC.

Rakesh out, someone with a brain in.
(apologies to whoever said that the first time)

Dullards out, Rakesh in.

No-one can take that seriously!!!

He’ll be in danger of getting a BFG Das Boot up his arse, when Per hears about this.

I didn’t think Per had the capacity enough to shove whole boats up people’s arses.

CountLeaf
Click to flag and open «Comment Reporting» form. You can choose reporting category and send message to website administrator. Admins may or may not choose to remove the comment or block the author. And please don't worry, your report will be anonymous.

thing is, Per’s positioning is so good he rarely has to recover.

I remember his debut against manutd, the moment he collected one of his first long balls , I had this feeling ” this is a player who is very calm and assuring , will serve arsenal for a long long time”. wipes tears.

I don’t know why, but I get the feeling the dressing room can be pretty gay sometimes…

Very true about a consistent back four and the guys in front of them, but Szcz has made some excellent and very important saves that have allowed us collect all three points.

What a gay thing to say.

The former oozes confidence and passion.

The latter oozes arrogance and twatiness.

After the match, the former will still ooze confidence and passion, with class thrown in as well, and the latter will ooze tears and embarrassment.

the man who would be bling
Click to flag and open «Comment Reporting» form. You can choose reporting category and send message to website administrator. Admins may or may not choose to remove the comment or block the author. And please don't worry, your report will be anonymous.

I absolutely love Szczesny so don’t shoot me down. But I’m not sure Neuer is more arrogant than him; both excellent ‘keepers with large egos with the talent to back it up. I’d rather have Szcz, just not sure Neuer is deserving of twat tag.

After szo many people wrote szczesny off last year, he’s finally szczowing everyone what he can do