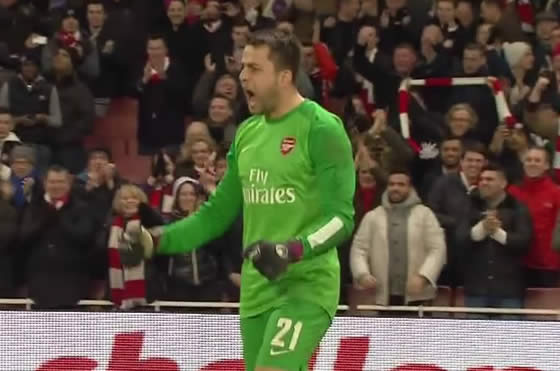 So for Lukasz Fabianski to come in and play so well yesterday deserves real props. Let’s be honest: the Polish stopper has had his nightmare moments in an Arsenal shirt, unable to translate the training ground displays into consistent first team performances, but after a bad shoulder injury, he seems to have matured into a very reliable understudy for Wojciech Szczesny.

And despite admitting he’ll likely leave the club in the summer when his contract expires, he put in a man of the match display against Liverpool yesterday, and spoke afterwards about his pleasure in ensuring qualification for the FA Cup quarter-finals.

I”m just happy that that I helped the team. It could have been a similar story because we started again a bit slow – in the first few minutes they had two really good chances. I managed to help the team in those situations.

“After I was kind of focused on every single chance that they had or any through balls because I think it’s really important to sweep up all those things where there is a chance. I just try to help the team and luckily enough I think I did OK.”

There was also praise from Arsene Wenger who has long insisted the keeper is of better quality than people give him credit for.

“I’m especially pleased for Fabianski,” he said, “because I have a huge respect for him and his attitude and his quality. I’m so happy that he gets this opportunity to show his quality.”

Played like he’d never missed a match all this time, that’s how good he was.

I’ll always love him for the way he celebrated us securing Champions’ League football even though he was on the bench most of the time. A true team player and has been a great servant to the club. He really deserves his chance at being the main man somewhere else.

I think the Turning point from the comedic “Flappy-Hand-Ski” was in the Champions League in 09(?) when he saved that penalty, and let out that roar. It was like something inside him clicked, and bang, in the next 10 minutes, shots which he would have turned into the net, were saved, very well i might add.

Since then he has been very good.

Something definitely clicked. I couldn’t have been more wrong as I thought it never would – short of a head transplant. It wasn’t his ability that was in question. I saw him in a friendly soon after he came and if Casillas and Buffon had been in goal together they couldn’t have more astonishing saves. The Polish youth coaches rated him higher than Szczesny. God knows what changed him. My theory is that he’d reached such an extreme of misery he suddenly found he didn’t care anymore and the nerves just melted away. Pity we can’t keep him but he’s… Read more »

We currently have the best goalkeeper’s’ in the premier league.

Someone is going to get themselves a very very good goalkeeper in the summer on a bosman, entering his best years too.

Am glad too Fab. We all are. Wait, I called him Fab? Hehehe. Times change. You deserve it considering all the vitriol uve received in the past.

Wenger has balls of titanium. If we’d lost yesterday with that team he’d have been absolutely crucified. If I was in his position I’d have played the strongest team just so that no one could accuse me of throwing away our chances of silverware. So glad he’s the manager and I’m not.

Jgrant
Reply to  The Artist formerly known as DangerMouse

and now we have a better chance for a result against Bayern.

The only player I fear could be a bit knackered is Ozil. But if he has runners around him in that one, he could still be very effective.

I thought he looked full of energy yesterday compared to last weekend. And you’re right, give him runners. It was his slide rule pass that set off the Ox for the second.

I’m just amazed he had the belief to give Sanogo a start in the FA Cup, against a pretty much full strength Liverpool side, when he’s only played a bit for the U21s since coming up from the French Ligue 2. I thought there much be something a bit special about him for Wenger to place so much faith in him. And he was proved right. If I’ve learned anything over the years watching the Arse, it’s to trust the boss.

If I was Rogers I’d have told Lukasz to come to Liverpool and be No.1 before I left.

To be 2nd choice keeper, only play a handful of matches and then turn in that sort of performance in a high profile game after being annihilated just days before by the same team… absolutely incredible.

He did the same against Bayern last season… had a feeling it would work out!

Fab played really well. Good saves and if you think how often he was playing this season it is really impressing how he mastered the game yesterday. Sad that he is going to leave us but it is understandable when you see his performances. Hope he will leave with won silverware.

I hope we can still persuade him to stay. With four competitions every year there should be enough games to go round!

Still on that same save, I told the guy next to me that if it were Szcs in goal he would have brought Strurridge down for a penalty

Fabianski biscuits was stale and crickled but now his biscuits fresh baked and crunchy.

The fool of a Took
Reply to  Cheyu

The King of Biscuits is the Bourbon, at least that is what my mate Ken Tuckey tells me, I have to say, I tend to agree with him on that.

Fabianski’s performance yesterday was as delicious and satisfying as a whole 12 fingers of all butter Scottish shortbread.

Have you ever seen Peter Kay talking about Hobnobs? That was Fab yesterday!

Whoa dude… That’s so deep. All this talk of biscuits is giving me the munchies.

If we ever make a big final we should play him in goal. I’m a hugr fan of Chezzers but first Bayern away now this… he is the best lucky charm ever! (Not that luck has much to do with being so good)

Overmars
Reply to  The only Olivier is Giroud

Yeah, Bayern Munich away and now Liverpool. I count at least 6 saves against Liverpool and he was immense against BM.

Safe to say he’s proven himself and really unlucky not to be number 1.

Yes he is a lesson that one should not dismiss players so easily. Ramsey is another, Rosicky is another, Flamini is another. Lots of examples to be had there.

Stick by your players, and they will deliver. Its a shame Fab is leavig, but ah well gl where ever you go. I am sure he will be an assett. That one on one save off Sturridge, when I thought he had around our goal keeper was class.

Put himself i nthe shop window for a summer contract elsewhere with a big game like that. Will need an experienced player one their way own (like schwazer at chelsea) to replace him i nthe summer.

thumb down for comparing him to Schwarzer who by the way should have been playing for Arsenal yesterday as so many people wanted in the summer.

maybe you should concentrate on ridding us of “fans” like fat gooner before lambasting a newbie whose first language is not English.

It wasn’t pedantic. I just politely informed a new commenter of the rules. I didn’t lambaste him or anything like it. Also, you’re making a big assumption that English is not his first language.

Maybe put your brain into gear before you fly off the handle next time.

Also, English as a second, third or indeed thousandth language does not excuse text speech.

Also many were worried about Monreal but again he stepped up to the plate with an assured performance. 7 interceptions from him, crucial ones too!. Yet another position we have well and trully covered.

Are there two Herald goons, as there is one who spouts constant tripe about how bad the team, manager & football club is as a whole, then there is this one who praises & enjoys his team.

Much respect to the man, he stuck around, possibly thinking as a no2 he’ll be next in line. He watched Scz come from out of nowhere and jump ahead of him. He stuck around some more, without fuss. He now looks like he’s ready to be a no1 somewhere, so good luck to him. Just some more of the same against Everton, our semi final opponent and in the final against City (judging by the way our cup run has been)

His performance yesterday was an advertisement to other clubs plain and simple. He HAD to play out of his skin as he has said he will not sign a new contract.

I think Mr. Wenger needs to avail him more match time otherwise it would not be easy getting another good 2nd choice keeper like Lucas, just in case he is pushed out due to lack of game time.

Seems Wenger knows more about keepers than he is given credit for.

Mannone is doing well at Sunderland despite the defence he has in front of him.

I really hope Fabianski goes abroad as I believe he still has the potential to be very good, he is still only 29. The perfect club for him would actually be Liverpool as I believe he is much better than Mignolet but obviously hope that doesn’t happen.

Normally it would be easy to criticize Fabianski for giving Agger that free header late on. In this case, however, I like to think it wasn’t bad goalkeeping so much as it was Fabianski’s overwhelming desire to punch Agger in his ugly mug. Well done I say.

Can’t help but wonder who would be #1 if Fabianski didn’t get injured last year. He often seems to have a bit of bad fortune about him

At least he’ll keep Szcesny on his toes.

As much as it’s gonna suck for the team when he leaves, I’ll take comfort in knowing that he’ll receive regular football at another club. He’s too good of a keeper to be sitting on the bench. He’s gone from copping countless amounts of criticism to being one of the best number two’s in the world.