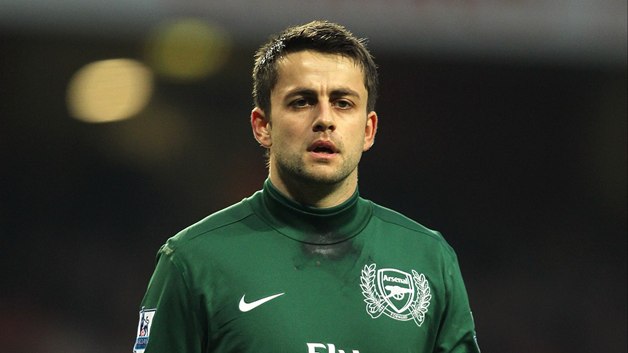 With Lukasz Fabianski set to leave the club in the summer, Arsene Wenger says he’s still open to a change of heart from the Polish keeper.

Out of contract in June, Fabianski turned down a new deal from the club, primarily because he wants to play on a regular basis which, at his age, is perfectly understandable.

But knowing how hard it is to get reliable back up, the Arsenal boss says he’d be happy for the Pole to stay, especially in light of his match-winning performance against the FA Cup against Liverpool last weekend.

“Of course it is a possibility that it is his last campaign with us,” he said, “because he wants to play somewhere but if he changes his mind, my door is open.”

It’s not gonna happen though, as Fabianski recently said, “I want to be number one in the club and in the Polish national team. I have learned a lot at London during very positive and challenging periods.

“With biggest respect to this great club, I didn’t accept the extension offer as I am looking forward to a new challenge in England or abroad.”

Completely reasonable from his side. All the best to him, show us what we’ll be missing in the rest of this season.

Very decent no 2. Would be more than happy if he stayed but can totally understand why he wouldn’t want to. Didn’t realise how old he was either. Needs to do something now or his career will pass him by.

From Flappy-hands-ski to Fab-ianski. That should be the name of his autobiography.

If he ever wrote that he’d need a cover photo of himself holding up the FA Cup or Premier League Trophy. Let’s hope he gets the chance before he goes. I wouldn’t do it now, as it might be seen as being disrespectful to an Arsenal player, but after he’s gone I shall probably feel the urge to point out that he bears a striking resemblance to Oddbod Junior from Carry On Screaming. I wouldn’t dream of doing that before he goes though. If he goes I wish him well, and I will be sad to see him leave as… Read more »

He’s the best back up keeper in the league, no doubt about it. In fact, he’s too good to be anyone’s back up, so either he has to play every other match or something, or he’s going to find himself a new club. It’s a shame to lose him, but very understandable from his point of view. I think most Arsenal fans understand this, and would wish him the best of luck should he decide to leave. I know I would, at least.

While it’s impossible to assess his hyphotetical performances as a No.1. keeper, recently he seems to be the best second keeper in Europe, definitely better than most of the first choice keepers in top leagues.

Wonder who would be the first choice had he not gotten injured last year.

Losing him would really be sad but it would be for the best… he is capable of being a #1 in the Premier League so he should go out and go for it. If Vito can do it then he can to!

Now, who would replace him? Only one off the top of my head would be Vincent Enyeama. International keeper, has experience, already a #2 and probably okay with it. Although I am sure there are better choices out there.

Think differently and offer him a good contract which guarantees he’ll be loaned out to a club of his choosing if he’s not first choice.

What a strange view to take.

please continue with your analysis..

Mannone is proving that this year, yep.

Pele was rubbish. People only rate him because everyone else was worse than him.

What the hell are you doing on a Arsenal fan site!!

All the best to him.

Not to worry, at least we’ve still got the up-and-coming Vito Mannone!

We’ve been lucky with back up keepers a lot of the times, when Almuni-oops was our back up he was great as is Fabianski recently, not sure about any of our young keepers at the mo so he will need to be replaced though

I don’t think sczny should have been sent off, but fabianski came on to the field to a penalty im glad it was not scored but fabianski will be keeper in germany on our away to bayern, kroos or muller go stop them fabianski

Who would have thought just a couple of seasons ago that we would be so well stocked in the keeping department. Fabianski deserves to reach his potential and it’s tough when the keeper in front of you is only 23(?).

Good luck to the guy, but from an Arsenal perspective it’s going to be difficult finding such an able number 2.

Hopefully his last game ends with him lifting the FA cup.

This loss would be bigger than us losing a striker or a defender. He is a keeper who deserves to play on a regular basis. better than most of number-1’s out there plying their trade in the premier league. Stay put plz, you would be a part of something really beautiful, start of something Big. you have bled with us in the darker times, now stay and reap the benefits of your patience.

The perfect solution would be to let him play all the cup games, whole szczesny plays the league games. That would give szczesny the extra boot up his arse to be on edge, knowing that if fabianski does well, he might get dropped, and visa versa.

Potentially that could be a mere four games (8 if we qualify direct to the group stage of the CL this year).
Even with us advancing as far as we have this season it only boosts it to about 8 or 12 games. That’s not enough to entice a player who believes he’s ready to ba a Number 1. A goalkeeper needs 20+ games a season to show his true worth and get noticed by his International coach.

He’s come on in leaps and bounds over the past few season, and has almost entirely cut out the mistakes that used to plague him. Best of luck wherever he ends up, I’m sure he’ll have no shortage of suitors come summer.

@Mick Great comment that made me spit out some of my cereal laughing.Utmost respect for Fab 2 as he certainly has come through some tough times.I agree that Flappy deserves to be Happy (or any of the other 6 graviationally challenged pals of Snow White)

It’s gotta suck being number 2 keeper unless you’re happy to collect your paycheck gathering splinters on the bench. You’ve got to respect anyone who moves on in a desire to get playing time. We’ll miss you and good luck wherever you go!

Just don’t let him go to another English club, if we can have a say in it, as he would be a top catch for any team but I would prefer it to be abroad!!!

If he starts the game tomorrow against Sunderland, I for one won’t kick the neighbours cat in frustration. C’mon Fabski, make yourself a hero for the last few months of the season.

I hope somebody is going to kick a Black Cat today.

Amazing how people use to make fun of him and castigate Wenger for not having ‘decent’ keepers. We now suddenly have two and we have an issue keeping both happy. All these numpties clamouring for Wenger to buy and spend good money should realise how difficult it is to keep players happy on the bench (point in case Vermaelen) So we spend a bunch of money on say Draxler, he can’t score penalties and ends on the bench and we have to sell him for a big loss? Wenger needs to account for the dynamics in the squad when adding… Read more »

Mick, u saying Pele was rubbish must be wiser than a zillion ppl. But that’s curious wisdom, I think

Laurel, Mick was saying that Pele was the best. It was sarcastic/ironic/wry humour to counter the insane ravings of the Spud using the name Goonergoner.

It will be a crying shame if he does leave. Best back-up keeper in the prem by a country mile, in fact better than most first class keepers. Offer him a better contract and rotate the two of them on a regular basis so they both get a good share of games. It will keep Sir Chesney on his toes and besides Fab is just too good now to let go!

I think Szczseny is more commanding physically and maybe is better at the aerial game, but Lukasz is better at coming off his line (something Wojiech could work on) and has better distribution. I like both of them and it’s tough to have two good keepers when one can play.

Much respect to Fabianski! It has been a great ride (remember the Porto backpass!) He has improved a lot and is coming into his prime and hopefully he is in goal when Arsenal lift the FA Cup in May! Then leave England please no Everton, no West Ham, no S**** (he’s smarter than that haha), no Newcastle, leave England pretty please perhaps Germany might be nice for the formerly flappy Pole!

Yeah, that was a stupid name they gave him. Flags flap, not Poles.

I really like Fabianski, I think he is a great keeper who lacked confidence and the mental strength to put his mistakes behind him earlier in his career, something he has much improved now. He also doesn’t complain and seems like a nice man. I would like him to stay and fight for the No. 1 spot, but I understand if he wants to make up for lost time and have a much deserving time somewhere new. Either way, thanks Lukasz!