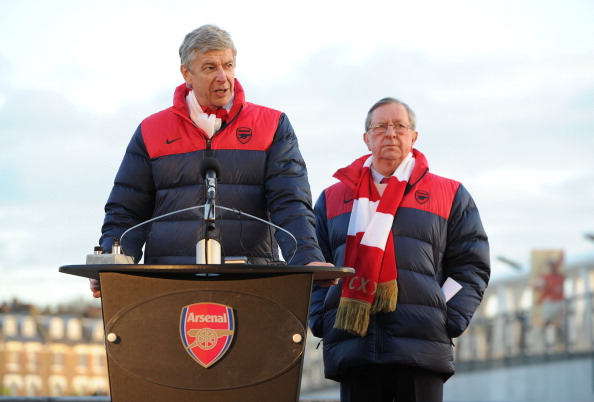 Former Arsenal chairman Peter Hill-Wood has led the tributes to Arsene Wenger on the eve of his 1000th game in charge of the Gunners.

Taking time to pinpoint the Frenchman’s attention to detail across all aspects of club life, the long-standing board member hailed the 64-year-old’s long-term vision for the club while confidently asserting that his managerial appointment will stick around at the Emirates for some time.

“He has transformed the place,” Hill-Wood told The Telegraph.

“Most importantly really, I think he changed the way football was played in this country. The first thing he did was to be absolutely horrified by our training facilities. We built new facilities to his design.

“I went round the clubs of Europe with him and an architect and surveyor. He was asking all manner of questions and making all sorts of notes.

“I particularly remember him commenting on the height of the bench in the training room at one. He said, ‘That would be all right for Tony Adams but it wouldn’t be right for Anders Limpar’. That was the level of detail.

“Without him and the success he brought to us, we would never have been able to finance the new stadium.”

Out of contract in the summer, and yet to put pen-to-paper on an offered extension, speculation has circled that Wenger could draw a line under his 17-year tenure in May.

“He [Wenger] doesn’t think his job is finished yet. I don’t think his enthusiasm has diminished at all. I don’t see him suddenly deserting and starting again at some other club.

“When I have spoken to Ivan Gazidis [the chief executive] he is very confident that there isn’t a problem. Arsène doesn’t like to do these things in the middle of the season. It’s not a question of somebody dangling great riches in front of him that actually don’t interest him.”

Lovely stuff from PHW and great to hear he’s been in fine enough fettle recently to make a few appearances at the Emirates since his quintuple (quintuple…that’s just showing off!) bypass.

What great a man.. Just wanna give the man a hug
Wish I was the Architect that got to travel with Wenger.. *wipes tears*

The man who has never somehow(I find it unbelievable) beaten thespecialcunt will be the one to break that fu*king home record of thespecialcunt! You heard it here first!

Sometimes we Arsenal fans don’t realize how lucky we are. The day Wenger leaves will truly be a sad day.

He’s been boss for literally my whole life (almost, I didn’t quite get football at 1.) There is no Arsenal without Arsene. It’s in his bloody name!!

You are the best thing that ever happened to us Monsieur Wenger.

I fecking woke up 3am this morning after seeing a tweet by John Cross in my dreams that Wenger was about to join city, and someone had leaked this info to him just today, when Wenger gets all the plaudits for 1000 games, and a day before playing against maureenho, just in time to derail our season. I couldn’t get any sleep anymore and had to work out who leaked this shit info, and I came to a conclusion that it was the “[email protected] one”

Damn, shouldn’t have used the “[email protected]” reference, too obvious…

May I point out that the only reason the special cuntstill holds that stupid home record is as a result of a wrong call from the ref?(chelses 2 vs 2 westbrom) so I personally I dont twig why the cunt complains about refs so bitterly lik when ever he loses a game they are the cause of it.. Grow up thespecialcunt! Open your eyes and you’ll realise your the one always complaining. Would love to see you replicate your performance at villa on sunday!
Yea! We all know john terry is massive massive cunt!

I was listening to last 20 mins on way home. I even said to my wife when I heard Ramires name that he was going to do something (probably cuntish or dirty)! Sure enough 5 mins later he dives and gets the penalty that saves their record. Thank God he’s not playing on Sat.

Was Limpar still at the club when Wenger took over? Don’t think so.

Yes. it is generally accepted that he has an encyclopedic knowledge of football. I think Anders would very much have been a Wenger-type player as well.

Is this man for REAL?? I dont understand hw someone can be such a LEGEND…I Tell You ARSENE loves ARSENAL 1000 times more than all of our love for the club put together…

LEE DIXON
1988-2002
619 appearances; 28 goals
Arsene called me into the office one day and apologised to me on behalf of Arsenal football club because he’d seen my wages on my contract. Not long after he’d been there, he checked all the players’ contracts and realised that in recent years, me and Nigel (Winterburn), the two full backs, tended to get left out when it came to wage rises. He looked at our wages and said: ‘That’s not right, it’s a team game’, and he improved our contracts.

MARTIN KEOWN 1981-2004 449 appearances; 8 goals I always felt the boss left an indelible mark on people. I was once wearing a stripy shirt and he said to me: ‘You cannot wear that shirt again tomorrow. If you wear a plain shirt you can wear it as many times as you want because no one will recognise it. Keep your life simple, you don’t need lots of jewellery, you don’t need lots of cars or houses. Keep your life simple, take that on to the pitch and you’ll play that way with your football. ‘ The simple man –… Read more »

Why would Arsene Wenger be talking about Anders Limpar?!

Thanks for your interest in our clubs affairs PHW.

Another interesting interview, with Bob Wilson, from a month ago:
http://www.independent.co.uk/sport/football/premier-league/arsene-wenger-has-performed-a-minor-miracle-at-arsenal-says-bob-wilson-9149449.html

This Arsene love-in is making me feel queasy. I think I might throw up. The comments on this page just prove again what Wenger’s greatest achievement at Arsenal has been: spinning the truth and managing expectations. Wenger was terrific for the first eight years of his reign, but then he began to lose the plot. The last five years under Le Prof have been a joke. Tactical naivity, rubbish transfers and a wage structure which rewarded mediocrity but not excellence have turned us into perennial under-achievers. And yet somehow idiots here and in the media seem to think that this… Read more »

You are missing one very important thing mate.
After those awesome first 8 years, we BOUGHT A NEW STADIUM.
He was managing a stadium debt, while consistently losing top players, and still managed to keep the club competitive and playing his stylish brand of football.
He kept the club in the Champions League with NO transfer budget.
Tactical naivity, sure.

And when he finally got the money, he spunked it up on an attacking midfielder rather than the top-quality striker who we desperately needed.

Le Prof has been out-coached and out-thought by Maureen, Ferguson and many others.

Are you Moronho in disguise?

Here comes the fatgooner… Sometimes when you close your eyes and hit the thumbs down, it hits the thumps up accidently…

Because we’re so tactically naive this season aren’t we?

Fatgooner please shut up..
There only one Arsene Wenger!

Fatgooner: Trying to break the thumb down record since 2005.

Seriously, would you not be happier if you took up knitting instead of following football?
As its about Wenger’s 1000 games, could you not have come on here and given us a happy memory from when he was “a great manager”?
Or is your problem really that you only started supporting us in 05, so your a little pissed that you missed out on the “good ol’ days”?

I hope he will use £100m warchest for the summer to turn the team into a fearsome Artillery as in the days of the invincibles.

This Article is fantastic and so refreshing. Wenger is just a genius and truly loyal Arsenal servant. long may it continue.