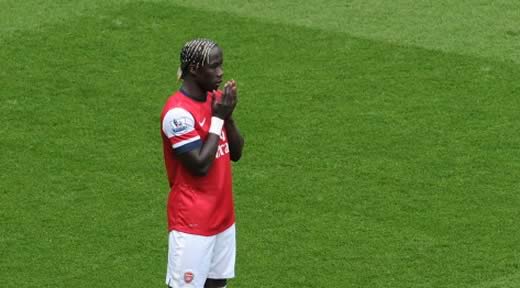 Bacary Sagna admits that Arsenal went through a phase of playing badly but believes the squad have begun to fight for each other again after the FA Cup semi-final victory over Wigan.

Reflecting on a three week spell that saw the Gunners endure drubbings at the hands of Chelsea and Everton and draws with Manchester City and Swansea, the French international stressed that the squad weren’t delivering on the standards set over the previous 12 months.

Speaking to Arsenal Player ahead of Monday’s game with Newcastle United, the 31-year-old spoke of finishing the season strongly:

“I hope the best is still to come because we still have games to play. It was good to stick together because we were playing quite badly and dropped many points.

“But it was about time to wake up and that’s what we did recently in our games. We’re fighting a bit a more and we’re helping each other a bit more as well.

“We had to react because we were beaten too many times and didn’t fight to win those games. We showed a different image from what we’ve done in the past year and it was not Arsenal.

“Now we’re fighting back and we will take it step by step. With Wigan we managed to show some character – it was good to come back to win the semi-final and I think it’s going to give some power to the team to the end.”

If only it weren’t for the slip-ups. The individual mistakes. The cataclysmic cock-ups. The bending over and getting shafted by opponents. Oh, and the injuries. We might actually have won the league this year.

Still, the FA Cup is nothing to be sniffed at and obviously the importance of securing Champions League status has been well documented. It’s time to stand up and deliver on those. At least.

Would have taken 4th and the FA cup preseason. That gets me through the shit we’ve all taken this season.

According to the laws of Quantum Mechanics, WENGA can be OUT & IN at the same time. So please STOP FIGHTING

“We’re fighting a bit a more and we’re helping each other a bit more as well.”
Why were they fighting less? Isn’t the league title worth fighting for? Why can’t Arsene get them pumped up when it matters? For the first time in years, the league could have been ours.

ArseCast Administrator 2_3
Reply to  According to the laws of Quantum Mechanics, WENGA can be OUT & IN at the same time. So please STOP FIGHTING

Now Mr Bac man. It’s time for you to wake up and realise you want to retire as a gooner!

Wake up? The team has been dormant for 8+ Years.

Is it lack of trophies or prospect of trophies? Lack of money/years on the new contract?

I don’t but the ManCity rumours. I don’t think he would displace Zabaletta.

So what the heck is he waiting for?

As much as this season is a story of “what could’ve been” for us, I can only imagine that Bac and Tomas feels it as strongly too.

Playing their hearts out every season and choosing to stay, and finally getting close to the title, only to see it slip away (when it was largely not due to either of them individually).

Now sign the thing Monsier Bac! We still need, alot, don’t be a traitor like van rapist or that lesbian called nasri! Please!

Gutbukket Deffrolla
Reply to  Angolan Girl Who Loves The Gunner

Players leaving the team aren’t traitors. They’re people doing a job, and sometimes you move jobs. Most of the players who leave do it respectfully. Sagna may have chosen to leave, but he is not a “traitor” to Arsenal any more than you are a Nobel prizewinner for Humanitarianism.

I guess we slipped, accidentally, but repeatedly over and over. like dropping the soap in a prison bathroom… 35 times at the same exact spot… behind a man called Omar who whistles wen he comes…

In all honesty, I have been big fan of his work rate and professionalism over the years. He could have easily played in that invincible era. However, we need to look beyond him now and find a Coleman type of player to step in.

12th Man in The Clockend

The signs are there to tell me he’s not signing up.

As much as I’d love him to stay and I feel him and BFG have been the most reliable and consistent players this season – I just can’t see it happening. He would have signed up by now?

Yep, I feel the same. You just never know, though.

Unlikely. He’s at an age where it’s now or never. He has been a great servant to the club but he may want to experience a new horizon before he calls it quits. Plus he will want to bring in as much as possible before retirement. We will need a new Rback. Seamus Coleman is my preferred pick. he is playing at a high level and is familiar with the PL. If he comes in around 15m, he is doable for Arsenal. Any more and we have to consider alternatives. Possibly Debucchy is another which we can get from le… Read more »

Piszczek would be ideal, hopefully Szczesny has already had a word.

If Dortmund could throw in Reus in as well that would be awesome!!

Not sure how many alarms we need to set to wake up. This has been on going for a number of seasons. Particularly worrying trend being us getting beat by the bigger teams (and now Liverpool) Primarily I feel it is down to Wenger’s tactics. He adopts a higher line believing (possibly true) that if we defend deep against these teams like we do against others in the league, we invite them to attack and they have the quality to punish us. But the way we defend high up without carrying sufficient threat opens us to pacy counters which have… Read more »

I can’t see either of your remedies being realized. Wenger isn’t going to change the way he addresses tactics, nor are we going to do a huge amount of business in the transfer window. Fabianski, Vermaelen, and Sagna could all leave and will need to be replaced which would still leave us short across the back because we’re already short in terms of defensive personnel. And then there’s the problem of an additional striker. Two central defenders, a right back, a goalkeeper, AND a striker? What are the chances? No, it’s going to be a while before we’ll be able… Read more »

Last night I had a dream that we lost to Newcastle, & I’m worried cos this is the 1st time that I’ve ever had a dream about Arsenal losing.
We were 3 nil down at half time & the booing when the ref blew the whistle woke me up.
I’m scared!!!!! 🙁

Yeah but it’s Newcastle and they don’t have Pardew on the touchline swearing at everyone and trying to beat people up so I think we should beat them quite comfortably. They don’t have Cabaye anymore so they’re not much of a threat.

Afraid they do. His ban is over.

Yeah. Everyone knows that dreams are a real indicator of what happens in the real world. Every single one of mine’s come true so I know exactly where you’re coming from.

I guess there’s no point going to the match now.

You’ll have to be at your best for this game mr Sagna now COYG!

I just don’t understand why we couldn’t have offered (or couldn’t still offer) Sagna more money if that’s what he’s after. Not to do so seems an entirely false economy when you consider what we will have to pay in transfer fees to get someone of even half his quality. I remember the days (just) when I thought 31 was old, but Wenger should know better. I do rate Jenkinson but, as a well known Gooner, I feel certain he would have been prepared to be patient for another season or two (and he might still have to be anyway… Read more »

When will people realise – Bacary hasn’t signed yet because no one has made him a “sign da ting” song!

Wenger obviously has a certain amount of money in mind for Sagna, and won’t go above that figure…shame really cause as much as I love Jenk’s passion, I don’t think he is any where near ready…

You can go back to sleep if you leave us bac and don’t fight for any team you play in.

Off topic but sad to hear of ex barca boss/coach vito viillanova losing his battle with cancer today. i know barca are cnuts most of the time but i always thought this bloke was a decent chap.

Is it just me, or is the first sentence of the fourth paragraph a different color to the rest of the text?

Nope. Its that the rest of the text is a different colour to the first sentence of the first paragraph

this aside..I dont like what Arsenal are doing with Sagna on his contract.
They are indirectly discouraging players from staying loyal to the club.
..otherwise why has he not been given the cobtract he wants..given that part-time players like Podolski get ~90k..
or am I missing anything.

Fact is…you know nothing about the talks. For you to say you do not like what Arsenal is doing with Sagna is pure ignorance.