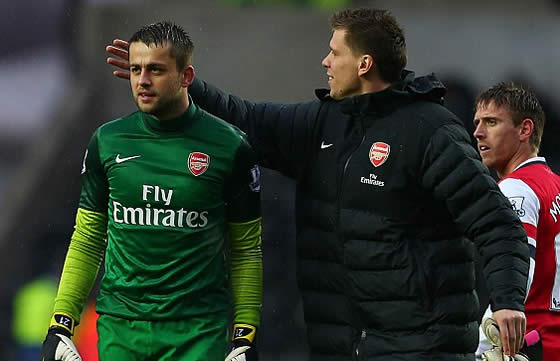 Arsene Wenger says he’s still hoping to persuade Lukasz Fabianski to stay at Arsenal but accepts he can’t dictate the fate of both the Pole and Bacary Sagna.

Both players are out of contract at the Emirates this summer and given their form are not short of suitors. While the boss seems resigned to losing full-back Sagna, who moved to London back in 2007, he still appears to think there’s an outside chance his keeper could stick around.

“We have only two players who are out of contract – Fabianski and Sagna,” Wenger told press at Friday’s press conference. “All the rest need our agreement and they haven’t got it yet.

“I want to keep [Fabianski]. He’s 29 and has a decision to make. Does he want to stay here or move and have a guarantee to be No 1? He knows I want to keep him.

“I hope, because we have shown faith in him for long periods, that we will be rewarded for that.”

The boss also touched on the impending transfer window suggesting the World Cup could well influence when business is undertaken.

“At the moment I have people around me who start to look [at players]. What is available you know always, but we are not on the market specifically at all because teams still play in many countries.

“After that, from my experience, the World Cup years have always been very quiet until the end of the World Cup, with no players reachable. Everybody is focused in the country on their national team and there’s not a lot happening. People are away.

“I believe this year again you will have to wait until July 15 to start going. It will be busy but the main thing for us will be to keep the stability because we feel we are close. We want to add something that makes us even stronger. But number wise it will not be massive.”

Arseblog News suggest that in light of the above comments you take a read of the latest blog by the wise man from East Lower. He’s got the right idea.

I think he’s got a good chance of unseating SZCZ if he stays next season. Should the younger of the two poles slip up a couple of times or sustain a medium to long term injury, I could see him putting his cap on the number 1 spot.

As an aside, if Wenger is planning on playing Fabianski in the cup final, he really needs to play him today and next weekend.

Guaranteed to stay up in the league next season if so

That’s as realistic as when Wenger said nasri and judas would stay.

Not saying at all that fabby is the same!
He deserves a cup final place. He also deserves 1st team football at a high level club.
it goes to show that quality keepers develop later than outfield players and you should stick with good ones while they are still developing.

So if Sanga goes to city or PSG he is likely to be blocked from playing for them in a CL squad.
Howd’ya like those apples Bac?

Hes proved himself between the sticks this season.though itd be great to have him stay I wouldnt begrudge him no1 status at another club. Withe regards to bacs, it seems like a forgone conclusion that hes off.shame to lose such a quality player.

Of course I’d like Fab to stay, but really wouldn’t blame him for leaving to be no1 elsewhere. As for the world cup and transfers, won’t we all be in the same boat when trying to recruit? There really is no excuse for not spending (overpricing will be rampant for those who do well In the world cup obviously) but declining to reinforce sufficiently because it goes against his grain to pay over the odds will ultimately be a disaster.

I hope he stays. We’ve not had a reljable pair of keepea for an age. Now we’ve got a healthy duo that are both more than capable ( most times even match winning). I’d hate a situation where fab leaves and szcz gets lax again.

Leon,
National teams will block agents from
Messing around with their players while they are in WC training camps.
So that leaves Zlatan, and who else to make an early move for?

Wont blame Fab if he leaves for afirst team place in another club,it is even suprising for s me one with such vision and amasing displays to be always on bench,i think arotation in the goalkeeping role according to form wd hve been so helpful

“We have only two players who are out of contract – Fabianski and Sagna. All the rest need our agreement and they haven’t got it yet.”

So, does that mean Vermaelen is staying?

Ok..how many well known players do you reckon we get this time…?
Take a guess…

Boy, did Bendtner burn his bridges..

People will disagree but based on his FA cup peformances he should be out first choice.. just my opinion Already transfer romours appearing Diego costa and Lara Bender being some of them.. me personally i believe Lars Bender is a done deal a typical Wenger signing.. I think keep the players we have with a world class striker Bender and perhaps one more and we will b a much improved team.. also keep Sanga FFS!! The board imo are the problem im sure Wenger would b more than happy to sign him up especially because of the loyalty, consistancy and… Read more »

Is Bender really that good? Haven’t seen him much. Seen Sven at Dortmund and he’s pretty decent. I would love to see Strootman from Roma, I think he would be a boss in this league.

Yeah very good i see a lot of him and he can play CB CDM a defensive player but very technical on the ball he can quickly make runs and turn defense into attack..

I think hes a perfect signing for us

Won’t mind vela coming back. We really do not need too many players. Aside DM and striker options, I say keep the players we have and we will compete effectively. Vela will give us an aguero like outlet while greizmann will give us more dynamism and goals from d left. Will Lars bender give us d shield we need, am not so sure cos he is more box to box IMO. However, let’s hope we have a good summer and a better injury record next year. We really missed Theo

When did Fabianski turn 29!? I thought he was a good five years younger than that. Time flies 🙁

I didn’t realise there was a chance he’d stay.I really hope he does.I think he’s much more reliable these days.
We’re going to need to buy in a number of positions this summer so if Fab stays we’ll have that bit more to spend elsewhere in the team.
Send in the BFG and make it happen Arsene!

I have a strong sense wenger won’t replace sagna. He’ll promote belleren and let him and jenks slog it out for 1st choice. If Vermaelen leaves he will have to replace. I don’t think that will be a big name either. I can see Ashley Williams rumours raising their head again but not sure how much substance they’ll be to them but personally I feel we could do a lot worse than him. As for the mythical “world class striker”, I think we all need to be realistic. How many of them exist that would be available? Last summer wenger… Read more »

Only World class striker that i can see becoming available this summer for a reasonable price is Mandzukic. He also fits the Bill on how Wenger like his strikers these days. So imo he will likely be a primary striker target this summer. Jackson Martinez might be a plan B As he is another similar type to Giroud, Bendtner and Sanogo. Personally i would prefer a more pacey, agile predatory striker infront of our midfield of playmakers, instead of another big slow static hold up play strIker. Our goal tally compared to City or Liverpool are pretty crap, and it… Read more »

Wenger needs to do the needful ….on time.No more last day panic buys.