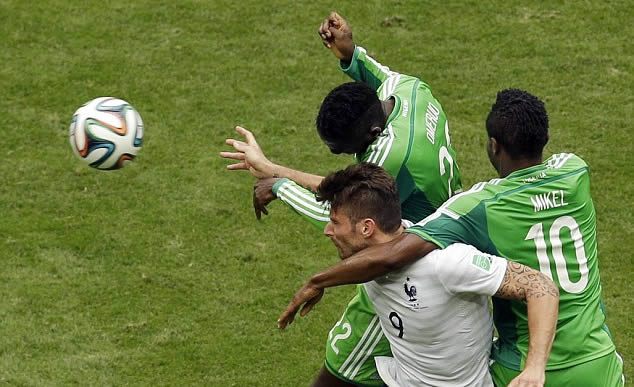 The Arsenal striker did appear to throw his arm back as the two grappled in the box at a set-piece, but despite the referee seeing it, Giroud only received a warning.

Mikel was clearly unhappy about the referee’s decision, but also willing to give the Frenchman the benefit of the doubt.

“Yes I got an elbow and the referee saw it and he only gave him a warning, not even a yellow card, nothing,” he said. “It was bad. We know the game – if you see it, act on it.

“The ref saw it. He did catch me, I don’t know if it was too hard but the intention was definitely there. I don’t think he is a dirty player. Everyone wants to win for his country.

“He hasn’t done those sort of things before so maybe it was just one of those things in the heat of the moment.”

Nigerian complaints about the American referee continued after the game with manager Stephen Kehsi saying, “I am not happy with the officiating because Onazi, on two occasions, he had a very bad tackle and nothing was done by the referee.

“I think the referee was … was biased. This is the first time I will speak about the referee in my life as a coach but it wasn’t good.”

Blaise Matuidi was fortunate to escape with just a yellow card for a tackle which may have broken Ogenyi Onazi’s ankle, and Giroud can count himself somewhat fortunate also. A stricter official may well have sent him off and ended his tournament.

The Arsenal man may still find himself the subject of a FIFA investigation if they decide to use video evidence to review the incident.

Don’t be an asshole mate.

They're building a Bendtner
Reply to  Gargoyle

While Chelsea are not as pure a team as us, this doesn’t mean that every player they have is a scum.

Only thing that matters…

“Boreham-wood vs The Arsenal” in 18 days.

Shawcross would have been proud…..sources say the tackle was greeted with wild cheer and praise from stoke fans back in England.

With all due respect, the referee had a howler Yesterday. key decisions That could have halted the bearing of the Match. Giroud could easily have been sent off, matuidi should have been red carded for That tackle on Onazi.
But Who cares…….. Giroud wasn’t sent off And We Want him to up his Game in the quarters.
A Good world cup for him is to Arsenal’s beefit!

Well, he can…but no-one should listen.

The reason he did it was because Obi Wank was holding his arm to prevent him from moving. Honestly, is there no end to this mans low tricks? I’m sure he was like it anyway but being around Mourinho really hasn’t done him any favours.
Still, nothing a nice brown envelope won’t sort.

I noticed that. Basically HFB was pulling his right hand/arm up from alongside his body (where the chav scum was holding it) and when you do that, your elbow sticks out. It wasn’t an intentional elbow and the Ref saw it.

Read the headline and thought you meant Arteta for a minute!

But, yeah, the ref did not cover himself in glory. Think they’ve been doing generally well with respect to allowing play to flow, but then doing a shit job on goals/pens, etc. very weird mix of refereeing quality.

Given the amount of physical fuckery Giroud gets during a match and doesn’t react to I’m far more surprised he doesn’t ‘give as good as he gets’ more often.

Matuidi is a dirty player and I dont think we need such an individual at the Emirates.
He had tackles flying around all day. He was on a yellow and went in hard on Onazis ankle. That should have been a straight red in my opinion.
Needless to say onazi got stretchered off and the game changed from that point.

I dont remember any malicious intent in Girouds elbow but I may be wrong.

At the end of the day, the French weren’t spectacular. I see them going home in the quarter’s.

Maybe Mikel should look in the mirror before complaining about players that go out and try and hurt other players. The guy was lucky not to have got a red when he tried to break Arteta’s leg at the emirates last season (and Arteta was lucky to not have got a serious injury).

Crap… Mikel is full of it!

Funny, Mikel has practised kicking anything that moves, sometimes even the ball
To complain that some nasty person has done something similiar,
strange aint it ?
Pity, I didn`t watch the game, would have loved that bit

He kept putting both his arms around Girouds waist every time Giroud was in or near the box,so he should expect some retaliation. Idiot

What he forgot to mention was that he was hugging him a bit tightly before that so-called elbow. I know he’s the HFB but still.. These things happen in a game when two players are fighting for a ball.

Matuidi tackle on Onazi looked really harsh though. I can’t be sure but it felt as if Onazi’s foot got stuck on the ground during the tackle which aggravated the injury. Could have been a red I think but you need a bit of luck sometimes in such a competition.

Looking forward to France vs Germany (or Arsenal vs Arsenal if you like). Should be a cracker.
Giroud better keep his elbows to himself in that one, can’t imagine Per letting him get away with anything like that.

Per will fine him!

i kinda like that O.G has added a little fight in his repertoar this is the second elbow I have seen him dishing ou this tournament. The first i fully supported as he was being hassled by a defender i dont remember who in a corner situation. Yesterdays was rather odd and although hard not to support a Chav cunt being elbowed it felt very over the top considering the attention Mikel gave him.

French should be very thankful that the ref was rather far from neutral. Matuidi’s unpunished tackle is unbeliavable .

I didnt see the game last night but matuidi has been brilliant in all the other games at w.c.

Anyway when are we gonna hear from Arsene, to give us an update. Haven’t heard anything since Ivan said were in ‘Deep Conversations’……..less to say we havent heard anything whilst the like of chelsea, utd, city and liverpool have added to their squad. Why are we always last??

Its Giroud – my guess is he missed.

A dud for France and a dud for us.

Poor tackle from Mathieu should have seen a red. Not taking away the fact that he is a fantastic player. The kind of player I will like to see at Arsenal. Strong, boxtobox runner.

Still can’t believe Matuidi got away with a career-threatening tackle , should have been a red. Second time now that France has gotten away (Pogba on Palacios).

So Giroud elbowed Obi Mikel.
Hey, Blogs, you really don’t have nothing to say today. Struggling, a little bit, this time of year?

He has a job here. Why did you read it then? should have whatever important business you have…

woooooooo
didn’t mean to be rude. I felt rather compassionate here, it is actually difficult to find interesting news about AFC this time of year, I just thought that this news would never have had so many comments if we were about to play in the FA Cup final, and I thought of Blogs trying hard to keep his blog interesting, that’s all.

But I see what you did here, herolgoon, defendingr Blogs. You fight for your team. You never let go. You fight to death. You are a Sagna. If you want the right-back spot, you have my vote

It was quite stupid from Giroud, to be honest, I’d be fuming if he did that in an Arsenal shirt. Matuidi…well, what can I say, if the ref decides to not send him off it’s not his fault. That tackle was horrendous and I thought a straight red wouldn’t even have been debatable. If that was by a Nigerian player on one of the French stars, ending his World Cup in the process it’d be headline news. Watching the other match yesterday, I couldn’t help but feel some of these decisions have been engineered to go against the less glamorous… Read more »

He has been a bit elbow happy in the World Cup. Never saw any of that from him for Arsenal. Maybe it’s hot and he’s just trying to air out his armpits?

Maybe am a bit biased I see nothing special in Giroud’s back hand warning to Mikel but Matuidi purposely smashed Onazi’s leg like getting annoyed by smashing your TV set when Gervinho missed a one on one againstAluminia. He should have been sent off. Onazi was Nigeriann best player and when he went off france took advantage. Shawcross the leg breaker will be happy now

About time he starts to fight back. My biggest apprehension with Giroud is that for such a big boy he is to easily bullied and knocked around. Needs to start throwing his weight around more instead of crying to the ref everytime someone is a little rough with him.

Toughness is fine, throwing elbows is not. If he had done that in an Arsenal game and got a three game ban for it, would you be happy about it?

Also, the fact that Mikel is a cunt does not vindicate dirty play. I couldn’t care less about him, but elbowing someone in the face is stupid and it hurts your own team.

I accuse Jon Obi Mikel of being the worst no.10 of all time (closely followed by Gallas)

Blah, blah, blah, Mikel get a grip, you bitter cunt!

He has a job here. Why did you read it then? should have whatever important business you have…

Arseblog,thanks for always reporting without bias,the Ref officiating against smaller teams don’t help at all or stay neutral,the tackle on Onazi,was a straight red card,the French take over the mid field when he got injured and to Giroud’s elbow on Mikel, the intention was there and should have been a sent off,this the third time the French players got away in this World Cup,that Mugsmasher Sakho,Giroud twice. I believe it that elbow were done to Arsenal players,we won’t like it,then why do we like it when is our players doing it? Fans,watch games without bias

I’m disappointed at some comments here, Giroud did a bad thing and all you all ccould do is glorify him. Mikel is a Chelsea player and a cunt and as a Nigerian I know but what Giroud did is unacceptable not to talk of Matuidi’s tackle.