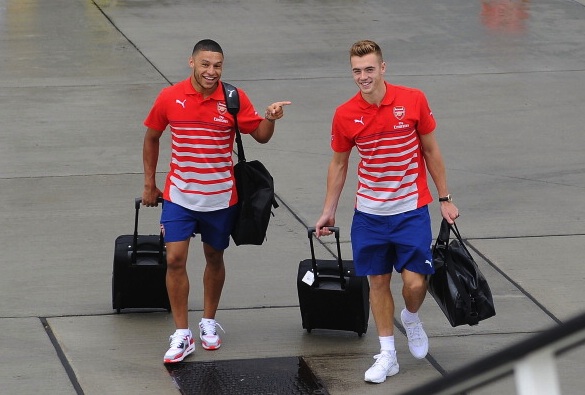 Calum Chambers has been ‘rewarded’ for his great start at Arsenal with a first call up to Roy Hodgson’s England squad.

The Three Lions are set to face Norway in a friendly on 3 September before kicking off their Euro 2016 qualification with a trip to Switzerland five days later.

Following the retirement of Steven Gerrard, Ashley Cole and Frank Lampard Hodgson’s emphasis appears to be on youth with fellow Gunners Jack Wilshere and Alex Oxlade-Chamberlain also called up.

Before the season started Arsene Wenger spoke about Arsenal helping England to win the World Cup, as Bayern and Barcelona have done with Germany and Spain respectively.

Well aware though of the added pressure that comes with playing for England he urged Hodgson to take his time with Chambers; words seemingly not heeded.

Just two weeks ago he said of a potential call-up for his summer signing, “In England you have to be a bit more patient. He [Chambers] has played three games and I think it is important for the development of the players that it doesn’t go too fast.

“Not so much on the football front but psychologically as well. That players feel that hurdle after hurdle they feel stronger and it doesn’t go too quick for them. For me that is something that is very important in development.”

He did add that he felt Chambers was mature enough to deal with his rapid rise to the top of the game.

Yeah, for us non-English Arsenal fans, this is not good at all! He’ll probably end up hamstrung after five minutes.

Also kinda frustrating that Arsenal players are always in the squad yet get benched in favour of the sorry mediocre likes of Jordan Henderson and Danny Welbeck for no other reason than because Arsenal aren’t media darlings, unlike Liverscum/ManU.

Based on past evidence Henderson is the best partner for Jack in an England midfield, probably the best English midfielder behind him, too. Welbeck is a little under-rated too, it’s strange that you pick up on him but don’t even mention Tonwsend/Rose/Jones, far less deserving of a place. Good to see Colback there though, he’s a good little player imo and could do well.

Chambers really deserves it, he’s been easily at the level required but maybe it is a bit of a rush, either way it’s nice to see the recognition.

Talk of him playing RB for England, makes me worry. Utility players are good to have but if you want a young guy to develop, give him his position and let him master it. And that position should be central in his and my opinion.

Well done on making the squad though of course!

i think that mastery would come by playing regularly for his club in that position. Aren’t these few matches scattered across the season more about giving international experience and getting them to know and play with each other?

They are more to do with money then anything else

I agree with you completely. One thing I’ve noticed about Chambers that Wenger noted also is his frame. Might just be our gorgeously lithe new shirts (one of which I am a proud owner, thanks mum) but boy he looks like an absolute athlete. Considering he’s only 19 and has four or five years to develop physically I think he could be a serious, machinelike central defender in a sort of Brazilian Lucio mould

Jack,Calum and Alex……if you get a knock during a game go down and stay down.
No coming back injured boys…ESPECIALLY YOU JACK !

No surprise. He may well be currently England’s best centreback, right back, and defensive midfielder.

Chambers has been excellent so far, surpassed all expectations. Let’s hope the nation’s media doesn’t jump on him if he makes any mistakes, seeing as they’ve made him England’s saviour already. Think it may have been better to let him develop at club level rather than chuck him in at the deep end of England’s international shit tip

We can and should hope, but isn’t it sadly inevitable?

While this is well earned, I’m never too fond of players traveling all over just because of some national team match, especially if their role is likely to be rather small. I’m happy that players like Arteta and BFG will stay in London and work on their fitness. I wish more would do that

I think we all know Gibbs should be in goal.

Every year these early in the season pointless friendlies happen and every year they drive me crazy, especially every 4 years. There should be a year of bereavement from them after a World Cup year. It’s is bad enough that that our players get injured during World Cup they also come back to training late, miss most if not all of the preseason training, some miss opening games, and never get a full rest so they are playing slightly tired all season. So then only after 25 days back to the business and trying to form a cohesive side, they… Read more »

Couldn’t agree more. Alexis has to go to fucking Tahiti or something to play a friendly with Chile. Ridiculous

You would think national team managers would use this as an opportunity to give younger/on the bubble type players a chance to see what they offer. Or just don’t play them at all so soon after the world cup which would be my choice.

The most telling thing for me is that at the world cup, we know lyrics had the one player from outside the BPL, and that was fraser forster at celtic. He now plays in England too… Only Russia are as bad as us!

Rose is there to service Calum’s chamber pot

As an Irishman I’m happy to see this English squad bar three excellent lads. For a nation of 50 odd million who’s national sport is football…..Jack Colback??
Really??
Also if Rooney is captain, we should refuse to let our lads play for England.

I don’t understand your manager Hodkinson. He pick only four Liverpool players. In the World Cup he took the entire Liverpool team. As my country are World Champions I look at your squad and I feel that is very embarrassing. Hardly any of those players would be selected for German ‘B’ team. Im sorry I being honest, that is a weak squad.

So conflicted about the national team. It’s always so damned underwhelming. No wonder I suppose, when yet again our busiest schedule is over the Christmas period. When other countries are having a lovely break our players are sliding into challenges on rock hard pitches and pulling muscles they didn’t even know existed. The FA in this respect are superfluous.

How does he handle this? On one hand, it can boost his confidence and enhance his career. On the other, it can be coming too soon thereby ruining it especially with the unforgiving english press. I think this may end up being a test of young Calums character. I hope it turns out well.

“Unforgiving” is far too kind a term for the “press”. The real truth is, all of the cases where player have been destroyed in the “press” can all be blamed solely on the press. If it’s ‘too soon’ for a 19 year old defender, well, that’s be cause it is. He’s young, Hodges knows it, the club knows it, he knows it. It is a friendly 2 years from the next major tournament. He’s SUPPOSED to be just starting development into the senior team. There is NO way he should be expected to be ‘ready’ to stroll into Euros. I… Read more »

Test of a young man’s character? Or a well deserved call up? He’s handled everything so far with a cool head, and as a analrapist I am quite certain he will continue to do so. And I know the inner workings of young mens’ character, mind you.

What a month Chambers has had!! £16m transfer, Arsenal debut, Charity Shield winner, Champions League debut (with ridiculous yellow card) and now England call up. This guy has bags of potential to become an Arsenal mainstay whatever position he ends up at!

As an Indian I have read in the last few years various players are the countries’ saviour. First Jack sometime ago Sterling Shaw Henderson now Chambers. How many saviours do you need to succeed?

To be fair to Hodgson, his choice for centre back is as small as I think I can remember. His firdt choice pairing are distinctly average IMO so Chambers could have many caps ahead I him.

Can’t believe Chambers has not been nominated as the New England Captain. He must be gutted.

“Luke Shaw’s chocolate éclair diet” classic. Why are the press not going insane over Shaw? If Arsenal bought him for that price made him train on his own because of “fitness” issues then was out for a month or so injured they would be in a frenzy.

Woe betide an England future with Liverpool (Sterling the exception). See last world cup. Arsenal are England’s future. The present generation in England have better technical skills particularly those educated at Arsenal. So media numpties keep bleating on about French Arsenal when we only have 5 french players. By contrast our German and Spanish contingents continue to grow along side an expanding stable of British players which include : Chambers, Ox, Theo, Jack, Ramsey, Gibbs. Akpom looks very promising too. Wenger revolutionized the English game because he went foreign early on and made the local lads compete where the media… Read more »

One the subject of Ox what a superb display at the press conference – even Wenger commented on it! Captain one day for sure

To be fair to Roy, as someone mentioned previously, his pool of choice for defenders is dreadful so he is probably as excited and more thankful than anything that there appears to be a young English defender who can play the way Chambers has been playing. If I could somehow put my Arsenal bias to one side as an England fan I’d be calling for Chambers to be starting either RB or CB in place of Johnson or Jagielka who are both distinctly average at best! So play him as much as you like and watch him grow into a… Read more »