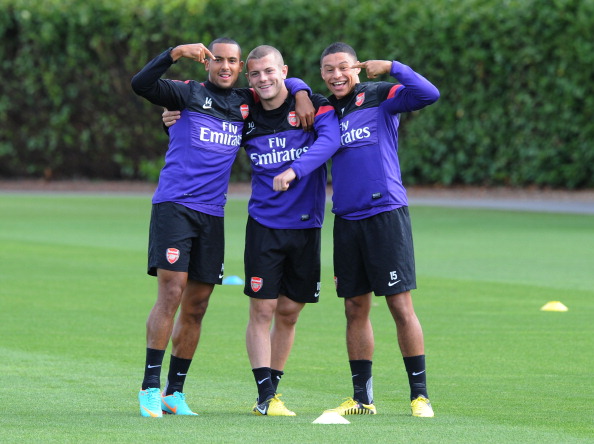 The recent acquisition of Calum Chambers, added to that of fellow ex-Saints Theo Walcott and Alex Oxlade-Chamberlain, as well as Kieran Gibbs, Jack Wilshere and recently loaned Carl Jenkinson takes the English contingent at the Emirates to six players, a statement of intent on the part of the boss to create a stable core of ‘local’ talent.

Namechecking the success of Spain and Germany, who fielded a majority of Barcelona and Bayern Munich players in their respective national triumphs, the boss said:

“It is a big season for Jack, but in the last three years, for me, this is the best shape he’s has been in. He has prepared, I think he is rid of his ankle problems and if he can maintain that I think he will have a great season – but it is a very important season for him.”

In other news, David Ospina won’t take part in this weekend’s Emirates Cup due to a thigh problem.

The Colombian goalkeeper, who signed for Arsenal last Sunday, had been penciled in for a debut against either Benfica or Monaco this weekend but hasn’t trained at all this week.

“Ospina has a little thigh problem,” confirmed Arsene Wenger this afternoon.  “He won’t be available.”

“I like him, he is intelligent and quick, he has shown he can adapt.”

The thigh injury isn’t thought to be serious but it does mean Gunners supporters will have to wait a while before watching the 25-year-old in action.

Wojciech Szczesny will share Emirates Cup duties with third-choice Damien Martinez and the Pole is expected to continue between the sticks against Manchester City in the Community Shield and against Crystal Palace on 16th August.

Wenger has said already that he expects Szczesny to start the season as his number 1 but made clear that Ospina will get game time if he works hard on the training ground.

“You know at the start Szczesny will be the No 1, then again it will be down to performances and, if Ospina shows that he is better, he will play.”

Hope this is not the first of many injuries to follow. I would take an injured second choice goalkeeper over a regular first team player any day!

frank from vienna
Reply to  Racerr

i thought i have seen matt macey (the tall one at the back?) at the austrian training camp too, can someone help me?

England were awful at the last world cup. It’s hard to imagine that the national side wouldn’t be significantly improved by the inclusion of Theo, the Ox, Jack and Gibbs (although Baines is one of the few decent players in the current first XI). Ross Barkley looks a very decent prospect – physically imposing, an eye for goal and stamina to spare. Would be good to get him on board in the next season or two. Anyone who saw Stewart Robson before his injuries would perhaps see a similarity there. But outside of him and our lot, I don’t really… Read more »

jack jack jack
Reply to  the only sam is nelson

For England to play good football we (I’m not big on international football but I’ll still say ‘we’) need Jack. There just aren’t any other English midfielders with his class and ability to link play. Germany have got shitloads to choose from, but without Wilshere, England really suffer.

Racerr
Reply to  the only sam is nelson

Wow he’s 28 already? That gave me quite a good laugh!

DR
Reply to  the only sam is nelson

It probably says a lot about the Egnland team that you pick out his stamina and physicality over his great touch, vision and quick feet! I’m intrigued to see if Sterling’s form was just a purple patch or if he can actually kick on, not sure he has the right mentality for the top.

It would be hilarious if we go into the Euro’s with an Arsenal core, after the years of ‘ruining the England team’…

I never blamed wilshere when he said he couldnt motivate himself for a dead rubber match(england vs costa rica) they should have continued with the world-class henderson?? Who had more than 50 Ucl appearances and the king of Own-assist steven gerrard! England will never learn…

“No one is too good for arsenal, and i think even steven gerrard(own-assist king) knows that” – Wenger

You missed the bitch slap at the end!

“You’re never too good for Arsenal and Steven Gerrard knows that,” Wenger says. “But I can understand completely that he asked him to stay because he wanted him (Suarez) to play with him and have a chance to win the Premier League. But it didn’t happen, and anyway, Suarez left.”

I thought the 1st part of the statement was a f**king bitchslap but that ending is what i call a “slam-dunk return service”
I wanna have whatever it is Mr Wenger is puffing. In Arsene we trust #COYGs

Steven gerrard. …..you got told!

Let’s continue building a core of German talent, since they are the best in the world. And then we can phase in the developing English taken.

Suarez didn’t stay cos Gerrard said that, he stayed because the powers that be at anfield ignored the release clause in his contract. John Henry admitted as much.
Gerrard is a twat.

Add Ramsey and the “British Team” would be a shoo-in to lift the super prestigious, much sought after Olympic Gold.

Was Born a Gooner

Always Been a Big Fan Of Jack. Being a Young Fan, I Didnt Have the Pleasure of TH14 And DB10 so Jack against Barcelona has been My Hero… Personally cant Find a better Dribbling Central Midfielder better than Jack, Maybe Iniesta, buh Take Iniesta Out and Jack is Up there… But Iniesta Doesnt Have His Bravery and Passion… Now Lets Have an Injury Free Season From Jack and Let Him Show the World His Willpower… . And am Begining To Think Gerrard Is Mourinho’s Lost Long Relative. Well, John Terry’s always a Bigger Cunt… . “Too good For Arsenal” *Scoffs*… Read more »

Yawn…..Bored already, it’s been far too long since this club has won a major trophy or signed a world class player! 😉

With all due respect Sir, please concentrate on Arsenal winning the Premier League and Champions League a couple of months before the World Cup finals in 2018. Just saying…..

AS17 is for A.Sanchez not A.song

am not english but if I were, I certainly wouldnt have been happy with the team. first I think that the english team is over over rated. there are a couple of decent lads in it but overall its more like a collection of bunch of sunday school kids playing an amateur game. that squad needs major repair. as in Major. bold decisions have to be made and certain players dropped. dont have to name them but you know who. second, england needs a bolder manager. one who isn’t afraid of making decisions. someone like Arsene. though that can only… Read more »

The players are good. Just the coach Who doesn’t know how to get the best out of the players at his disposal. More that anything out there the national team of England need a decent coach, the new generation of technical players are allready comming trough, Soton beeingen the main source right now but we’re trying aswell with Gibbs and Wilshere e.g.

To give credit to “Woy” he was trying to use the same idea as del Bosque and Löw but lacked the players to do it. The Liverpool players (aside from SlippyG and Johnson) had almost no CL experience, neither did the Soton boys. What does Gibbs have that neither Baines nor Shaw have? He’s played CL football for the past few years and didn’t look out of his depth.