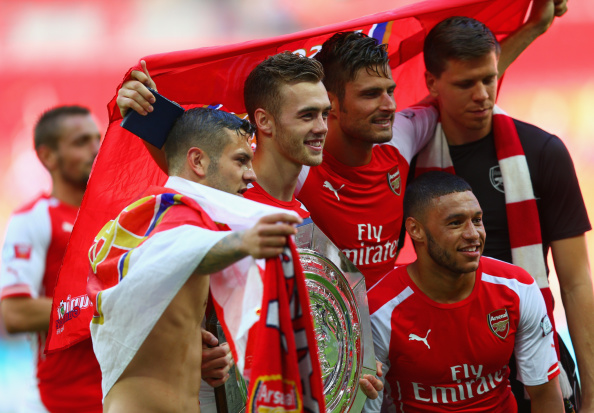 Roy Hodgson says Jack Wilshere is playing his way back to form and believes the Arsenal midfielder can step up for England filling the void left by retired duo Frank Lampard and Steven Gerrard.

The Three Lions start their qualification bid for Euro 2016 with an fixture away at Switzerland on 8 September with expectations rising that a new generation of players can put the disappointment of this summer’s World Cup in Brazil behind them.

Speaking to the the FA’s official website, Hodgson outlined why he’s optimistic Wilshere can fulfil his potential on the international stage.

“He is a player who has been on the radar for a long time, and has been unlucky with injury. He broke onto the scene long before I came along, but of course, when I came along he wasn’t available because of the long-term injuries.

“We got a chance to briefly see him before he got injured again, so it’s probably only been the last six months or so, leading up to the World Cup, where he’s become a feature and someone who could fit the bill for the midfield.

“It leads you to hope and believe he could do the same thing in an England shirt.”

Wilshere is joined in the current England squad by teammates Alex Oxlade-Chamberlain and Calum Chambers with the likes of Theo Walcott and Kieran Gibbs also tipped to challenge for a place when they return from injury.

It’s the first time that Chambers has received a call up to the national team; an achievement that caps off a whirlwind two months that has seen him make his Arsenal debut, earn plaudits at centre-back, pick up his first silverware and test himself in the Champions League.

Impressed by what he’s seen on his return from the World Cup, vice-captain Per Mertesacker believes Chambers has everything going for him.

“He has everything,” Mertesacker told Arsenal Player. “He can play different roles and he will be very important. He comes in and it’s easy for him to feel comfortable. He’s so composed and he will play a big role. As a person I like him very much because he’s calm, he tries to learn and he listens all the time and that is something that is really rare.

“A first proper pro season at a Champions League club and [playing] international football will be very tough mentally and physically, but he has the character to cope with it. If he wants any advice, I’m here to help.

Firmley ensconced as Arsenal’s third choice centre-back following the departure of Thomas Vermaelen, Mertesacker also stated his belief that Chambers has the strength of character to deal with the responsibility of playing both domestically and for his country.

“It’s very important to have such ambitious players and you could feel that from the start when we first met just how ambitious he is and how important he is for the squad even though he is just 19.

“In our days, good players come in very early and they will get a call-up very early so I think it’s down to the English manager and Arsène Wenger to deal with that. But his character is up for it. That’s my opinion and I don’t think it will go wrong for him.

“He will be very important for the club over the next few years. I didn’t see him much last year for Southampton and I didn’t recognise him. But how he managed to deal with the first few games under pressure and how he trains impresses a me a lot.”

Now for the first time I think Roy will definitely get a positive result. I wonder what Chamber will like in d heart of Arsenal defence when he is 25…. Who cares what Man*re shaw in Luke… Wilshere please don’t drop that form you picked against Besiktas…. COYG

I’m not here to poke fun or condemn the England team but can anyone name a player who has actually lived up to the hype after being called up to play for the National squad (in the 2000s), after being touted as the next (insert random comparison/expectations). I just feel the media/managers (picking undeserving players and not even considering there may be talent outside of the EPL) do more than damage than good. Not saying that this is the case for Chambers but I figured that this blog welcomes all commentary/debate. What do my fellow gooners think is the problem… Read more »

I’m not sure they do that much harm to the players, there’s hype but if it wasn’t there, there would still be young guys getting egotistical far too young. It certainly affects the FA getting rid of managers though, I think they’re willing to chop and change on the basis of media/public opinion and I also think if it wasn’t for there being so many Liverpool players in the failing team this Summer, there would have been more of a call for Hodgson to go.

Wenger said he’s going to give England a Good team.
Well, Ladies And Gentlemen, this is the beginning!

BTW, Sanogo opens his account Today. Am That certain!!!

Time to give cambell a go as this is getting ridicules. 70 minutes by any chance ?