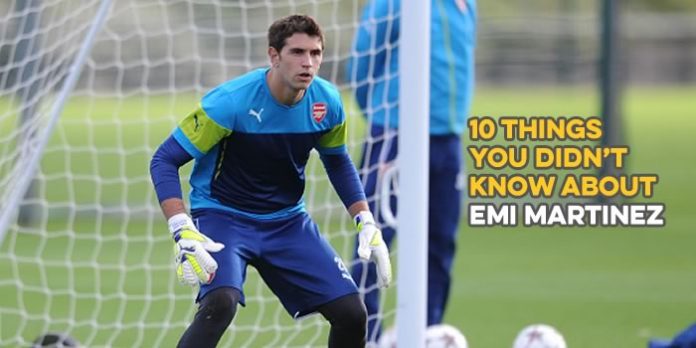 He’s set to make his first Champions League start for the club tonight, but just who is Emi Martinez? Where did he come from? What’s his bag (as they say)?

To give you a better understanding of the young goalkeeper, here are 10 things you might not have known about him.

1 – Despite only playing twice for Arsenal, he has been called up the full Argentina squad. In 2011 he was asked to replace the injured Óscar Ustari for a game against Nigeria.

2 – He was known as Damián Martinez, as his full name is Damián Emiliano Martinez. He’s recently asked to called Emi, short for Emiliano, having grown weary of his youth team colleagues at Arsenal taking the mickey out of the name Damian and suggesting he was the son of Satan, as per the character in the Omen.

3 – While on loan at Sheffield Wednesday, he was involved in an altercation with Joey Barton in a 3-0 win over QPR. The temperamental midfielder went in late on the keeper, who responded by pinching the skin at the back of his arm and telling him he was for it after the game. Barton locked himself in a janitor’s closet at Hillsborough until the coast was clear.

4 – He cites his goalkeeping influences as David Seaman,  Sergio Goycoechea and Stéphane Henchoz.

5 – If he hadn’t been a footballer he would have pursued a career in science. Before he joined Arsenal he had been accepted at the prestigious Institute of Future Technology (IFT) in Buenos Aires to study under renowned professors Dr Eme Marrón and Biffez Tannen.

6 – Martinez told Argentine newspaper, La Noticia Impostura, that when he first arrived at the club Jens Lehmann was a massive help to him and gave him a piece of advice that he always remembered and had tattooed on his back in Gothic script:

“Now this mountain I must climb, feels like the world upon my shoulders
Through the clouds I see love shine, it keeps me warm as life grows colder”

He says these words remain an inspiration to him, when he feels heartache and pain and isn’t quite sure if he can face it again.

7 – He comes from a very sporting family. His brother, Martín, plays as a striker for Spanish second division side Recreativo Huelva, his uncle was an 1980 Olympic silver medalist in the pole vault, while his father was the Argentinian Street Luge champion for 6 consecutive years between 1986 and 1991.

8 – In an interview with arsenal.com he was asked his favourite things, which were as follows:

9 – Before coming to Arsenal he had trials at a number of Premier League clubs including Wigan, Portsmouth and Norwich. The Canaries were keen on signing him and sent joint majority shareholder Delia Smith to seal the deal by cooking him the perfect dinner. Unfortunately, she got a little carried away with the cooking wine, straddled the table seductively and shouted ‘Come on, let’s be ‘avin ya!’ .

After excusing himself briefly, a terrified Martinez was forced to flee through the bathroom window.

10 – As a child he was once introduced to Argentine legends Mario Kempes and Ossie Ardiles at a summer camp for kids. He was so nervous he vomited chewing gum into Kempes’ beard, requiring him to shave it off and sport a conquistador moustache until it all grew back.

That is amazing banter. It really is.

Use of the word “banter” should be banned.

“…to study under renowned professors Dr Eme Marrón and Biffez Tannen.”
A++++++++

Glad you and 6 others (at this moment), got it.

Unfortunately i didnt get it 🙁

I thought Eme Marron = I’m a moron, and Biffez Tannen = eh fuck it, I don’t know.

I got it too, Blogs.
Eme Marron took me some time but heh!

I feel like this may be partially made up. Although I definitely believe the Delia story.

Where Norwich City is concerned, ol’ Delia will straddle the table for anyone.

How do you think they get so many fans to turn up at home games?

How many of these are actually true?

Well, I had to flee through a bathroom window once, so I can believe that one.

But I know for a fact that he does not have a tattoo saying
“Now this mountain I must climb, feels like the world upon my shoulders
Through the clouds I see love shine, it keeps me warm as life grows colder”

What Jens actually said, and what he had tattooed was

“At a corner, when a forward gets too close,
stamp down hard on the fucker’s toes.”

The super-tip that Lehmann gave him would be “If you really feel like taking a leak during the match, go do it…”

Let’s hope he cranks the P.O.S in the dressing room. The way the squad’s been playing the last few the last thing they need is that trance shit!
http://www.youtube.com/watch?v=iAvB08O3IUc

11. He will be having a clean sheat in his Champions League debut

I would hope the “clean sheat” is in the bathroom prior to the game and not out on the field.

I feel like I know him so much better now! Everyone knows you cant trust someone in goal who you don’t know. Thanks blogs!

11. He has never been injured before.

12. His first injury happened in the fourth minute of the away game to Anderlecht on October 22nd 2014, when a swooping seagull’s beak severed his tendons in what was described by the commentator as “the kind of incident that reminds us of the wild unpredictability of football, apart from when it comes to injuries to Arsenal players”

I wish I could thumb this up really high. A happy, nobody got hurt when this was written post, Daz.

Arseblogger, please take a stand for a larger thumb – like Uma Thurman’s in that movie where she has a big thumb.

henchoz was a defender you twarts

the only sam is nelson
Reply to  JC203mate

@AAllenSport
Admin
Reply to  the only sam is nelson

Part of what makes these comedy articles so good is finding statements like this in the comment section.

A very handy one

I love number 6, the fact he may actually have the lyrics to Foreigners ‘I want to know what love is’ tattooed in gothic text on his neck 🙂

No, he does have those lyrics tattooed on a part of his anatomy, but not on his neck.

He’ll know what love is if he keeps a clean sheet tonight.

He looked very good in the Red Bulls game. I was in the front row at the 18 and watched him very carefully, (mainly because I had no clue who he was), along with Bellerin who was on my side. Both impressed. Bellerin made some amazing attacking runs; blazingly fast. Martinez looked very confident and professional. Both players will do fine today.

Can’t tell if this is madeup or not. Any way outerly hilarious!

Chuck
Reply to  The Little Rozart

11. He is an Arsenal player. I must have been in a coma when he played.

Whose our fourth choice keeper btw? The ox would almost have a claim with that diving save against Chelsea last season.

Or maybe that was gibbo.

Stephane Henchoz, and you’re wrong on both counts, it was Walcott.

Oh my god, like, Blogs, that’s totally creepy. How did you know I never knew those ten things? Blows my mind.

I met him when he was on trial and played in a reserves tournament in Dublin in 2010. actually from that squad, I think he may be the only one left at Arsenal, apart from Wellington and Afobe who are out on loan. Went to an open training session and I was very impressed with him.

I already knew none of these thing!

If he thinks they take the piss out of him for being Damian,
somebody should tell him that Emmy is a girl’s name.

Out of the frying pan…

Ah, you seem to have missed the rest of the tattoo:

In my life, there’s been heartache and pain
I don’t know if I can face Reading again
Can’t stop now, I’ve travelled to Belgium
To squash this lowly team

Hope he has a good game regardless of his terrifying run in with Delia.

And I heard he didn’t join IFT only because he had a girlfriend who didn’t want him to go? When asked about it, he shrugged and said, “that’s the power of love.”

Another fact that isn’t well known is that he is so desperate to keep clean sheets that he keeps his bed in the dressing room.

All true I tell ya…

The last time we were optimist about a youngster starting in the CL, it was Bellerin. And we glost 2-0. Hello, I’m Mister Party Pooper.

Knew all except the first one!

What about Huddart? Can we see a spec sheet on him? C’mon Blogs. Couple hours til the match…… 😉

So, when are you going to publish your next book, “Arseblog – the classics”? Should be a huge hit, and this is undoubtedly a candidate.

I’ve been following for a few years now, but I’d love to see the classic blogs I missed.

ps. “Eme Marrón” — that foxed me, till I realised I don’t speak Spanish. Very clever, tho’. Trouble is, I still don’t quite know how much of it may be half-true — and after reading this, I’m certainly not going to trust wikipedia!

Funny arseblog but this time thanks to jc206?mate, comments funnier lol.COME ON YOU GUNNERS. oh yeah, loved No3.

Deserves a start for Pinching Joey!

loved that this came up on the pod today

love you emi, you deserve every success and sorry you were overlooked for so long