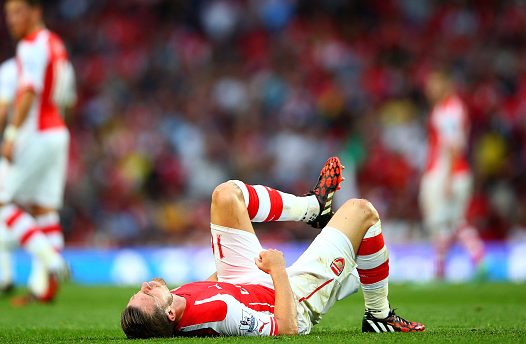 As we know it’s been a grim week for Arsenal on the injury front, not least because of the knee ligament tear suffered by Mesut Ozil.

While Arsenal initially looked to play down the seriousness of the problem, there’s now an acceptance that the Gunners will be without the German for at least two months, but Arsene Wenger says the club will make their own diagnosis as to the total length of his absence.

The Germany national team doctors Tweeted that he’d miss 10-12 weeks, while Wenger told the official Arsenal website, “When he arrived with the German national team, they didn’t think it was a lot at the start. He was supposed to practice on Wednesday but, in the end, he said that wasn’t possible for him.

“Then he had a scan and it was bad news. We have our own specialist giving us his opinion after reading the scan and examining Mesut. We will follow our own recommendations.”

Which is fair enough, but it’s unlikely to make his injury lay-off any shorter. However, there does appear to be better news about Aaron Ramsey.

Some reports said the Welshman could be out of action for up to two months, but that doesn’t seem to something the manager is planning on, saying, “For Ramsey it’s day 13 today and I think it will be day 21 before he is back into training.”

He also provided an update on Theo Walcott and Serge Gnabry who has been out injured since well before the end of last season with what’s believed to be a knee injury but the club have been extremely reluctant to release any details of his problem.

“Theo is not too far away now,” said the manager. “Serge has been out for a long, long time and Theo has also been out for nine months, so it’s good to see them back. They’ve worked very hard and they’re very dedicated.

“They are back in the group on a daily basis and that’s very good news.”

Why do you hate us God

If only our Welsh Jesus could heal the wounded.

The curse must have backfired. All his goals from last season are taking out the Arsenal players.

We needed a CB & Wenger didnt

After the Kos, Ozil et al injured players this is really encouraging.

we have new updates on new injured players?

Yes, a rickety goal fell on top of Chesney and Ospina and now they’re both out for 6 months with ruptured face ligaments.

Good to know theo’s back . hopefully he’s in the squad for next weekend. with ramsey 8 days away, its not all doom and gloom.

Sounds like it’s too early in his fitness training for him to be in the squad.
But I hope I’m wrong.

I just hope we don’t make the same mistake twice with Ramsey. Last time a two month injury turned into a four month injury because we tried to rush him back.

Theo will make the loss easier to take. Hope Welbeck, Sanchez and Walcott can form a classy front three.

Looks like Rosicky will be back in the fold. And Santi can play in his preferred role behind the front three. A top three of Alexis, Welbeck and Ox for now till Theo is fit and back. Not the end of the world. But we can’t have ANY more injuries in CM now.

We still have a bit of cover in CM with Jack (and assuming Diaby can actually play a few games before his next big injury) and Coq would relish a chance to go forward while I believe Alexis has be known to play there as well. It’s the potential Kos injury which is a bigger issue with only CC & Hayden as cover (and Monreal as a real last resort).

Our injury team would have a awesome line up

Our most senior player in the team gets the most roles

Diaby isn’t injured, he’s just not being risked yet.

I gather they want Diaby ultra-fit before he plays, In the hope he is less likely to get injured.

The Welsh Jesus will return and turn diaby into a dm………………

At least we will hopefully see someone of Rosicky, he needs more game time.

So does anyone know if diabys still fit or injured right now?

He’s not injured but Wenger is extremely cautious with him.

But he could actually be injured, it’s Diaby.

Will Theo EVER get to play with Ozil?

And we’ve lost a German in October. Can’t be surprised about it since it was predicted way back. With Podolski barely playing and Per retiring from International football, Ozil was the most likely of the Germans to get injured in October.

I won’t be as optimistic about Ramsey as Wenger is given how they injuries have taken much longer than originally anticipated.

I can already picture Podolski playing as LB.
Directed by M. Night Shyamalan.

What’s going to be the unexpected yet not all that unexpected twist? He blossoms into a fullback to rival Cuntley Cole at his prime?

Serge’s absence is rather’s puzzling. I wonder if he’s ill rather than injured considering the lack of details about his absence over the past 6 months.

The Ghost of Paul Robinson
Reply to  von Bigglesworth

Word is a serged gnabry is the source of his setback.

Guys how did our Gooners play for the national team…game not televised in S.A..

Arsepedant
Reply to  Gooner from Pretoria.

They were all very good, and Wilshere was named man of the match.

They all played very well. Wilshere was motm.

So frustrating. Is easily one of the top reasons why we fail to challenge for top trophies year in and out. The sad part to it all is we actually do have depth (apart from the defensive side obviously) but we’re never able to field the best XI based on form yet it’s based on whoever’s not injured. I sincerely hope this is just a little setback where the players are adapting to new training regimes but we will definitely reap the rewards long term with Forsythe. Maybe should interview him some time asking why he thinks this is happening… Read more »

“We have our own specialist giving his opinion”

My theory? Wenger and Diaby doing some voodoo to transfer all of Diaby’s future injuries to his squadmates now so that he can then go on a 5 year injury free run during which he reveals the full extent of his awesomeness. Although why those injuries couldn’t have been sent on to Chelsea is beyond me.

Only if there was a Sherlock Holmes to find out the fundamental problem with us injury speaking. These are no coincidences.

Something to cheer you up!
Remember when Arsenal used to get lambasted for having no English players …
Last night’s England team had five of us playing in it. That’s nearly half the team ☺

Gnabry’s injury is quite disturbing. Why the mysterious silence? It’s very unlike Arsenal. I don’t even recall the club announcing his injury, and they haven’t said what type of injury it is. Judging by the tweet below, it seems it is a knee injury:
https://twitter.com/SergeGnabry/status/473814993981685760/photo/1

“Electrotherapy is used world-wide as a form of treatment for soft tissue injuries such as *ligament tears and tendinopathies [inflammation of a tendon, or tiny tears in and around a tendon]*. Whilst there is very little evidence from research projects to support it’s use, clinical evidence and the experiences of hundreds of thousands of therapists and patients demonstrate that it can be effective.”

The Ghost of Paul Robinson
Reply to  WengersNoseHair

Arsenal has done a similar thing before – we went what seemed like a year and half + not knowing what was going on with Rosicky, leading to all sorts of rumours; the top one being he had a raging cocaine addiction.

Bollocks we need a DM. It is at Cback where we are extremely thin. When you consider the number of times Chambers was fleeced because of his inexperienced, you wonder what the devil people are going on about needing a DM. That goal by Chelsea was not the fault of the DM (No DM could have stopped that however physically imposing). Most of our goals have been conceded by set pieces this season. We have sufficient cover in the middle with Santi likely to be played central. It will give opportunity to the likes of Podolski, Campbell, Ox and and… Read more »

Up The Arse Nal

Interesting – Theo’s not on it, though http://www.physioroom.com/news/english_premier_league/epl_injury_table.php