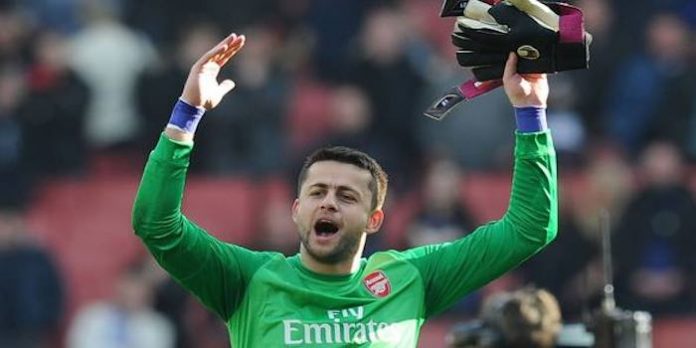 Lukasz Fabianski says he’s got massive respect for Arsenal but while the game is on tomorrow he won’t be considering any of his former teammates friends.

The Polish stopper left on a free in the summer having picked up his first medal with the club after the 3-2 win over Hull in the FA Cup in May – and revealed that although Arsene Wenger wanted him to stay his mind was made up to leave.

“It was my decision to leave the club and I finished in a good way so we’ve all got massive respect towards each other,” he said.

“When I was coming to the end of my contract there were more intense conversations more often between me and the manager, but I had decided to leave and he really respected my decision.

“It was ups and downs for me at Arsenal, I played my part in some of the important games but had difficult times as well.

“It was a big step for me coming from Poland to jump into a massive club like Arsenal and it took a while to get used to the league.

“I didn’t play as much as I wanted and got injured as well, but overall it was a massive experience and I’m happy with the way I finished my career at Arsenal.”

And on facing his old club at the Liberty Stadium tomorrow, he said, “It’s a funny experience for me but it’s all about the game. Forget about friendships and the past, it’s about the present and I’ll be doing everything to help Swansea win the game.”

I think it’s fair to say everyone was happy with how his time at the club ended, but if he could pull one or two of these out of his locker tomorrow, that’d be nice.

I hope he has a great game tomorrow. I hope the rest of his team play like rotten dog shit though.

Tomorrow, Swansea will be cooking up a rare Welsh Mexican treat – WilFried Nachos…. Can they win a Michelin star? … Be sure to tune in and find out.

Technically, he’s a former *Arsenal* keeper. Unless it’s a crack about his ability. In which case, why would you try to top the mind-bending creativity of Flappyhandski?

Hopefully he will do a Manonne

Come on Lukasz, just do what Mannone did…gift Sanchez one. Seriously though, I hope he does well tomorrow only for his defense to let him down thrice so that we win 3-0

Phil
Reply to  The Panther

I’ll be honest, even if we get to 3-0 I’ll still be on the verge of shitting myself.

It’s was fab having you play for us, but I do not wish u well tomorrow

I hope he plays like FLAPianski tomorrow!!! You guys are being too nice on here, haha.

A great chap, but he plays for the enemy now.

I like fabianski . He really turned it around . I was at that game v wigan where we lost 3-2 and he had an absolute meltdown .
Glad he came good . In fact I’d go as far to say he may even have displaced Chesney based on this season so far .
Shame .

Was a part of a classic fa cup win and i was lucky to be there. Respect and good luck in future flappy apart from tomorrow obviously!

That’s what Welbeck will soon say about Man U and then bring terror into their malpracticing defence.

You know he’s going to play a worldy!

all the best tomorrow, but we have Sanchez the Beast now

Genuine fella! hope he has a good time there. Just not tomorrow. A win is absolutely critical. 4-2 for the gunners!

Ha ha! Deep down he misses The Arse.

What has happened to Abou Diaby? He is not even listed with the other injured players now.

He’s busy counting all the millions he’s taken from us for doing fuck all.

If he was that interested in earning millions for nothing than he would have stayed with us by extending his contract. Do you have even consider the facts before sprouting your opinion or are you suffering from same disease as Piers Morgan?

Thirty down arrows for stating the absolute truth !! Diaby can’t hack football , as evidenced by the last 9 years with us !

May the best team win tomorrow.

So he will be celebrating if he scores against his former club tomorrow?

I can’t believe he’s started trash talking about The Arsenal. Let’s duff him up!!

Does that mean the best team on paper or 11 playing best as a team???

Thanks for the memories. Will never forget that game at Wolves, think Chamack scored a brace but we were on the ropes for a good number of minutes. All the best to him but not tomorrow

Won’t expect anything less from him really. He is true professional and in many respects I would have preferred him to Schezny.

Off topic: Mertesacker saying he wouldn’t consider it a failure if he never wins a league title. If Rio Ferdinand or Gary Neville were to say this under Alex Ferguson, they would be out the door. I am shocked and frankly disgusted

Consider what a failure?

Being a great player who stayed loyal to a team?

He will have plenty of top four trophy medals to enjoy instead .

I just love the guy. But hope welbeck and Sanchez put in one each today though

Welbeck could really do with a goal today .
Quite concerned about today , bony looks like he could eat Monreal and the BFG for breakfast .
We are going to have to outscore them as I can’t see a clean sheet.
Can sanchez bail us out again ???

He will be motm while szezney will be picking everything on target out of the net. You know like usual. What I’d give for Petr Cech.

Mike
Reply to  Nostalgic one

He couldn’t really say anything else in the circumstances. You’d have to say he was pretty good for us but he’s probably not good enough to stop Sanchez. That’s why he’s playing for Swansea instead of The Arsenal. Wish him well and all that, just not today.