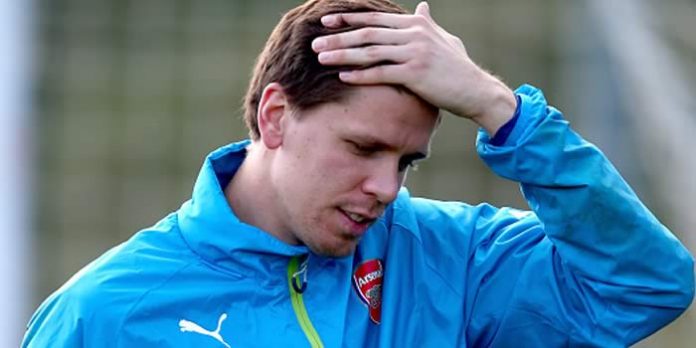 Wojciech Szczesny has pulled no punches with his reaction to Tuesday night’s 3-3 draw with Anderlecht, claiming it was ‘stupidity’ that cost the Gunners the win.

Speaking to laczynaspilka.pl, the keeper dismissed suggestions it was down to bad luck and put the blame squarely on the team and the way they played.

Referencing Arsenal’s late 2-1 win in the game in Belgium a couple of weeks ago, he said, “Then we were lucky, but what happened today [the 3-3], I would not call bad luck. Rather, our own stupidity. You can have bad luck when you lose a one-goal lead. You can have very bad luck losing two-goal lead, but to lose three goals?

“It’s stupidity and lack of experience.”

The keeper also revealed he’s a keen study of upcoming opponents using clips sent to him via his iPad.

“We have a great, new system of match analysis,” he said. “The individual clips, designed for specific players download to our iPads wirelessly, so it is very convenient.

“You watch it yourself at home or on the way to the game, to observe the habits of opponents, and much more.”

He also spoke about analysing his own performances which he prefers to do on his own for the most part.

“Frankly I prefer to do it alone, and not with the coach. As I watch myself, I am far more critical than if I was watching with someone else.

“As I watch, I can honestly and critically assess my performance. I am more critical of myself than any coach. Our goalkeeping coach analyzes the match with me, but I know best what I did wrong, so don’t necessarily need it, but I know that I have to.”

This is better than the a-typical “we’ll learn from this.”

I’m glad the squad is pissed. Show some passion and pride.

And how many times have you seen them pissed?….. they’ll be pissed for 2 games and then its back to being un-pissed.

In the old days, half the squad would be pissed and we still won titles. Football’s changed a lot since the days of Adams and the Merse mind you.

Yawn. You knew exactly what he meant. I assume Blogs would rather not have his web traffic from the US dry up, so you should probably just get over it. Our team has a global fanbase, of which we should be immensely proud. I understand the longing for the good ol days, but perhaps it’s a bit better now when teams don’t turn a blind eye to alcoholism. Anyway, agreed with the OP. Hope they all sit in a room with their families while being shown interspersed clips of themselves and then Alexis, while Alexis stands next to the screen… Read more »

Wow, bro, chill da fawk out.
No need to get mad at us for being Americans and supporting Arsenal. Whatever dude.

Did I miss a pop up on the site saying, “Only British English spoken here!”

Also, “Our” language? I was unaware you could actually own a language.

Well, they do have their name on it 😛

Ok fellas, I was only taking the piss. No need to get pissed off about it

Me So Hornsey
Reply to  Gooneropolis

But you guys was indeed stupid.

I love him too. but when was the last time he saved a penalty. or went the right way?
now I appreciate Fabianski more and the decision to play him in fa cup games last season. considering that semi final game

My name is my name
Reply to  AS17 is for A.Sanchez not A.song

Last time was last year against Villa, albeit they smashed in the rebound.

I don’t really get the criticism he’s getting for penalties after the last game. Pretty much all top keepers saves around one or two per year (excluding shootouts in cups). The often-praised Tim Krul has saved two penalties since the 09/10 season for example, and an experienced keeper like Fernando Muslera has saved exactly zero in the same period.

And it doesn’t matter at all how often he goes the right way or not, all that matters is the save.

Somebody had to say it!

The question is, “will you guys ever learn?”

And anytime we do this sort of thing, someone will come on here and talk about how Mancity lost to CSKA, how chelsea have only 5 first team defenders. Even when its quite clear that arsenal are truly a special case.

Well, that second one is true. Chelsea are pretty much in the exact same situation as we are in in terms of defensive cover. Technically they have 8 defenders, in practice it’s 5, maybe 6. They just haven’t had any injuries to the first 5 yet, and the incredible strength of their first 11 has blinded people to their squad depth issues. Two long term injuries to senior defenders could see them lose form fast though.

This post is brought to you by Apple, makers of the iPad

Right attitude in my opinion. Remember the bust ups between Lauren and Vieira? We used to win things regularly back then.

Shut ur face sczc . Usless keeper and usual rally the troops crap from him

he talks the talk.

4:4 draw away to Newcastle, 3:3 at home to anderlecht. Will they ever learn? Don’t think so.

Don’t forget 4-4 against Spurs at home

It’s been years, mate. They haven’t dropped nearly any 3+ goal leads since then.

Stupidity, yeah stupidity… I’d find out if you learnt your lessons when we play Utd

All of them have been talking who and who in particular are to blamed?

Do we really need to find scapegoats to blame? Will it make you feel better if we do?

Wenger buys the players, picks the players and they follow his ‘tactics’ *cough*….
Wenger seemingly can’t change a game from the bench after the game starts.
There was obviously no provision for being 3-0 up…the team had no instructions to do anything else other than to play the way they had been.
That’s why they were attacking when they should have shut up shop.
Wenger out….it’s his stupidity.
…and hasn’t Bould got a toungue in his head?!? Pat Rice would scream orders all during a match.

Up the Arse
Reply to  Arseblood

I’ve been thinking this about Bould myself. It’s as if we don’t actually have an assistant manager that can consult with Wenger when he can see what’s going wrong. Strange and costly predicament to be in.

Enough of all this talk. To make absolutely sure this doesn’t ever fucking happen again, it’s
time to properly punish players for underperforming.

Fifteen minutes after any loss, or a draw with a lesser team, the entire squad bar our MoTM (usually Alexis) must partake in a game of ‘special rules’ soggy biscuit in the dressing room.

The ‘special rules’ being: 1) Other than the first person, everybody has to take a bite out of the biscuit, and 2) On each such occasion, Emmanuel Frimpong is invited back to Arsenal as ‘special guest’.

We can only judge what they have gained from this episode by their performance in the Swansea match on Sunday, and beyond.

Loving the iPad business… About time! Hopefully someone is also ensuring that players actually watch the videos.

P.S. Loving the the font.

Thanks boys. Could you please transfer this anger to the pitch and defend as a team?

Evidently the only thing on Flamini’s iPad is Angry Birds

I’d argue that when you put Monreal at CB you’re not letting him effectively use his experience gained at LB, so I’d expect a raw performance from him.

Everyone else though, you’d expect much, much better from.

On a side note, given that Monreal and BFG don’t look great together and the fact that Chambers is a better CB than Monreal, does anyone else think we should bring Bellerin in at RB so Chambers can play CB?

Agree 100%. Chambers is much more similar to Koscielny in the way he plays as well. I believe blogs mentioned this a few times..

Been saying this for weeks now. Chambers is a CB, Bellerin is a RB. Why not just play each of them in their positions?

Watch the video on the way to the game? Does he use public transportation ? Hahaha…At least something has changed in the club. It used to be, we don’t care about how opponents play, we play our own game.

Was it stupidity or inexperience that made you come off your line and get stuck in no man’s land for our third goal?

“The keeper also revealed he’s a keen study of upcoming opponents using clips sent to him via his iPad.”

It is nice to see us studying opponents, but we don’t seem to be taking the knowledge on board when we play. For example, no one having the foresight to hack down Hazard against Chelsea. We know he’s a damn good dribbler, we know he can beat anyone in our team 1v1, so we… just kinda let him do that? Can’t remember the exact players involved, but someone should definitely have taken a yellow for the team. Sure, Flamini racks up yellows like nobody’s business, but like 90% of them are just stupid. This is starting to feel a wee… Read more »

Finally we do look at the opponents before matches. Not saying GG’s style was better, but I read he made dixon watch a video of a certain david ginola before our game with PSG…. I guess we did well…. I think we went on to win the cup in copahagen… I still have the moldy video cassette i recorded of the game 🙂

Sure, players made mistakes. But when things start to go wrong in a game, the players need guidance and good substitution decisions from the sidelines. And our players didn’t get that.

But I’ll keep picturing the incredible hustle from Alexis in my head…and Theo’s the other day…and Podolski in the same match…all brilliant. Can’t wait for Sunday.

So all this research is put into opposing sides. Why was it then that during the Chelsea game when Hazard stepped up to take their penalty. On my tv Sky showed the goal image of where Hazard has put his last 8 penalties. 6 of them went to the goalies left. Szczesny dives to his right and Hazard (true to form) puts it to his left and scores.
Now i could be way off here, but i would have thought in all that extensive research he would have known it best to go left when Hazard takes a pen?

watching the match, it suddenly seemed as if Arsenal got a coded message from the secret service agency. The very famous ”this team will self destruct in half hour”. Still feels surreal 🙁

Sanchez is surely pissed… He did so well through out the match..fans were so happy.. I mean ecstatic.. Until…

Another player who admits that he judges himself.
Nobody else does it.
Why do Arsenal coaches not give it to the players when they do wrong.
Grow a pair of balls

Mehn all this talk and talk and more talk does not mean anything if you don’t do it in games… szczesny is a terrible one v one goal keeper! And that includes PKs…. anytime an opposition is one v one with szczesny he either rushes out like a moron dives at the guys feet and concedes a penalty or rushes out but doesn’t come all the way but then goes down like a chicken with his arms spread out and eyes closed hoping just hoping maybe the ball might hit him..and during penalties he dives to the same direction every… Read more »

no matter how many goals we smash past swansea, it just won’t erase the disappointment of that 3-3 draw..