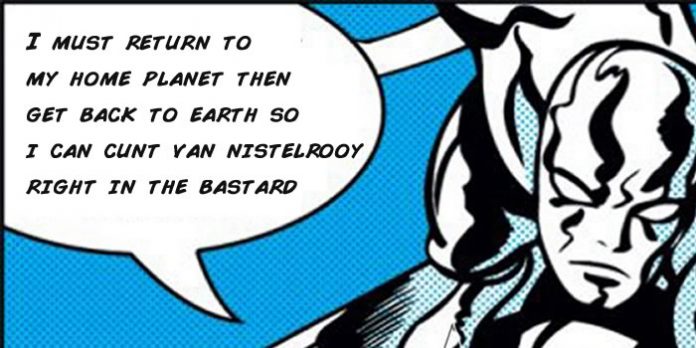 Arsene Wenger has revealed he came close to signing Batman, Wolverine and the Silver Surfer but the deals broke down for various reasons before completion.

Having discussed at length links some years back with Lionel Messi and Gerard Pique, the Arsenal manager expounded on the near misses at his press conference this afternoon.

“Yes, it’s true,” he said. “We had a young Bruce Wayne here, he came with Alfred and we did show him around the training ground.

“We even got a ‘Wayne 9’ shirt made up for him and he seemed very happy, but in the end he felt he had to avenge the deaths of his parents by protecting the people of Gotham from crime. I respect that a lot.”

Pressed on other potential arrivals which didn’t work out, Wenger revealed that Wolverine had ‘”a little bit of everything you need in a defensive midfielder.

“Strength, work-rate, positional sense and a laser-guided long pass that would have made Steven Gerrard weep, but we could not control his temper.

“He eviscerated a youth team player who tackled him a bit late. Thankfully we had a doctor on site who was able to save him, but if it had happened during a Ford Super Sunday we would not have been able to cover it up.”

The Silver Surfer is the one that really got away though.

“Look, he could travel faster than light and the surfboard had no handbrake. I saw him working well with Henry and Bergkamp, his pace would have added an extra dimension.

“Sadly, he was frequently homesick for the planet he was no longer allowed return to and his attempts to do so resulted in too many cranial injuries.

“In the end we felt we couldn’t make the investment in a player who always would want to leave and who would probably be a cabbage by the time he was 30.”

Intriguingly, a loquacious Wenger would not make any comment on the rumour that he’d turned down Captain America in the mid-90s as he felt, after seeing Cobi Jones and Roy Wegerle, that the game hadn’t developed sufficiently Stateside at that point.

The player wolverine attacked was healed. Not wolverine. Otherwise true though

Diaby could use some adamantium.

I have my exam tomorrow and you are wasting my time with these stupid articles! fuckin ‘ hell!

Good luck in your exam though to be honest, you really should be revising

With ManU visting the Emirates? Even though factually correct, sir, your demand appears to be unduly demanding!

That bit about the surfboard and the handbrake is gold

News of an Arsenal-Wolverine connection must be true because Wolverine is currently dead.

Is it true that Podolski stole Thor’s hammer and welded it to his left foot when we had the Norse god on trial a couple of years ago?

You nailed it (with aforementioned Hammer 😉

Should have thought of maybe trying to get the stretchy one of the fantastic4?

He’d end up being our best goalkeeper since Seamen!

Just report the fuckin story, this attempt at humour was just annoying.

No it isn’t. Come on, we’ve missed out on so many of the Avengers now it’s not even funny. Clearly there’s a failing in our scouting system. While we dodged a bullet in failing to get Wolverine, how could we have missed out on a talent like Captain America? These are serious matters that need looking into.

Plus the whole injury sh*t since we didn’t manage to sign Wolferine is highly suspicious!

There are plenty of places where you can just find ‘the fuckin story’ but the reason most of us come to Arseblog is because of the personality and verve that Blogs adds to things. If you don’t like it, find something you do, and everyone will be happier.

All hail to the Bloggs! 🙂

Spider-Man could do a good job at centre half. He could just web them up and shit. And with Bruce Wayne up front we’d be unstoppable….

If he used his web on the ball would it be a hand ball?

Imagine how the press would have had a field day if Wenger signed Peter Parker (a good-for-nothing Pizza delivery boy from NYC?!) Unfortunately, these superpowers typically come with their respective super-secret identity. I think this is what really made the transfer to come unstuck.

Maybe somebody should check Diaby’s history to make sure he isn’t really Elijah Price.

Dear Blogs, you are ACE

The name is Fury…Nick Fury.

It’s blindingly obvious that Drax is the fabled destroyer we need… Get your chequebook out Arsene, he’s not even on a contract with the Guardians of the Galaxy.

What about Mystique? Bet she could do a great Jose Mourinho impression.

As for utd.. was on the northbank when Mclair missed pen oh the joy. Oh the memories. Winterburn v mclair, rocky being rocky, wrighty v schmiecel, paddy v keane henrys volley, overmars at old scaffold, WILTOOOOOORRRRDD and paddys pen. Priceless! lets have another!

I concur with the Silver Surfer decision, but converting the Hulk from a DM to a winger was a waste of money in my eyes. But then what do I know about anger management?

*ended up with Denilson.

God damnit, now I can’t stop imagining Mertesacker with an eye-patch marshalling everyone around as Nick Per-y.

Can he maybe make a few more superstar signings in january and in the summer instead? We live in the reality, history is nice but he should focus on the NOW.

We talk way too much history at this club, think reality and future instead. He could have signed Zlatan Ibrahimovich, Messi and Cristiano Ronaldo etc etc. But he did not, and there is nothing that can be done to change that..

I heard plastique is a chelski fan

This right is why I love Arseblog. Fucking awesome!

Thank God they didn’t sign, AW would have ruined them from being super heros and turned them into super hoagies!

coyg NOT WENGER
Reply to  hammeringhank

Indeed… Wenger is after all not the same manager he used to be, his methods belongs in a museum, not in modern football. Gotta love the man but you cannot keep him because of sentiment. Nobody is bigger than the football club.

Wenger, keep all this for your biography after you have left Arsenal. Wish you success in the near future so that you stay. Will be really fond if in the future you disclose the tactics that beat Chelsea.

First time I think I’ve seen the word eviscerated used literally in a football story (as Jamie Redknapp might say, but without realising it was actually a literal use of the word in this instance).

Tomorrow will be v interesting, two teams low on confidence with defensive gaps means the managers should be setting up to not concede, so a 0-0 is on the cards. That’ll be 6-4 then. No idea who to, though.

I thought we signed the invisible woman. No?

I see you want to sign messi although barca look a little troubled against la liga, big game today v shrek and co. What would a win do for gunners 3pts both sides need a win coyg.

My Superhero 11: Silver Surfer-Thierry Henry-Flash Batman-Bergkamp Superman Thor-Wolverine-Iron Man-Captain America GK: Reed Richards from the Fantastic 4 Silver Surfer and the Flash as the wingers– so much speed, they couldn’t be stopped. Batman isn’t as athletic as most of these superstars, but he is a very heady player. Probably best as a cerebral central midfielder. Wolverine as a defender, he would intimidate the opposition strikers. Superman has the pace and power that we’ve been lacking in a defensive midfielder. Captain America’s shield would block every cross. Iron Man and Thor have the brute strength to complete a fierce and… Read more »