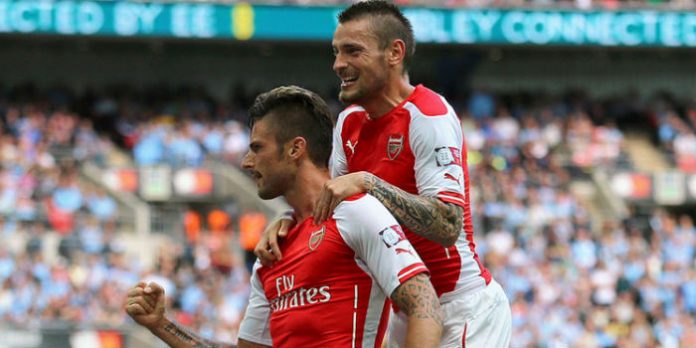 Olivier Giroud and Mathieu Debuchy insist Monaco will pose a stiff challenge to Arsenal in the knockout round of the Champions League, despite the Gunners being favourites to win the two-leg tie against Arsene Wenger’s former club.

It looked as though Arsenal would once again be pitted against one of Europe’s powerhouses after they finished second behind in their group behind Borussia Dortmund, only for the draw to pair them with a comparatively inexperienced Monaco side that squirmed into top place of Group C with only four goals to their name.

“I’m not relieved, no,” Giroud told L’Equipe [translated by ESPN] after watching the draw, “But it’s true that we had not been spoiled by the draw in recent seasons.

“Since I arrived at Arsenal, we have come up against Bayern twice in the last 16. That was a very tough draw. I have a friend who called me and said: ‘Oh, it’s good, a French team, you’re lucky!’. Meaning, ‘it’s going to be easy’. Well, we’ll have to see after the game.

“I think it’s 50/50. Monaco are a good team, even if they don’t have a lot of Champions League experience. They are a young team with very good players.”

Mathieu Debuchy, another of Arsenal’s ‘Frenchies’, told RMC he was looking forward to returning to his homeland for a ‘tough’ encounter.

“It’s rather nice to come back and play in France. It’ll be special. But it’ll be good for us. There are a lot of French in the Monaco team. For the coach too. It’ll be a good game.

“I have not seen all Monaco’s matches, but they have a strong team. They have very good players in their team. I’m expecting a tough game.”

Monaco appear to be warming up for the encounter with something of an Arsenal love in. Tactical we’re sure.

Yesterday the Ligue 1 side released a statement relaying how much they’re looking forward to reuniting with Arsene Wenger (20 years after they sacked him) and today they’ve sent a message to Thierry Henry wishing him well in retirement.

In return, Arseblog News will be sending a turd in a shoebox to Dimitar Berbatov.

Sneaky bastards AS Monaco. All the love in the world won’t save you from a hammering.

On a side note, why does wenger always pick teams whose colors are red and white?

Cos it brings out the blue in his eyes?

We’re not sure, but maybe he just doesn’t like bleu.

That last line, that is why i return to this website every day. HAHAHAHA!

Apparently Berbatov’s actually quite nice though. I’m sure I heard he does charity work for the homeless back in Bulgaria.

Perhaps you could at least put a note of warning on top of the shoebox?

In my “fantasy world” these teams move on to the final eight:

And somehow we manage to draw:

We then take down Barcelona and in the final we finally exact revenge on Bayern who wear themselves down beating Real Madrid in the semi’s and fighting off resurgent teams in the Bundesliga. 😉

Yes, it’s just a fantasy…but not too bad of one, though unlikely.

When we are fit, we can hang with any of those teams. Hopefully we can get by Monaco and have a full squad (lol, I know) for the next round. I like to see us squaring off against the best teams.

but thats just it – we are so dependant on the health of our squad. same as anyone I guess. but if we have all our stars available and match fit We could take on anyone.

The Ghost of Paul Robinson
Reply to  Rectum_Spectrum

Yes and know to the “take on anyone claim” – I do think the injuries make us look at the prospective team with rosetinted glasses to some extent. In the past we’ve had periods of less injuries and still manage to choke on our own feet like usual.

Fitness is the key… I believe we have a team that can hold her own against the best of Europe.
Our first team: Sczeszny, Deb, Mert, Kos, Gibbs
Arteta, Ramsey, Ozil, Walcott, Giroud, Alexis.
Bench: Osp, Calum, Monreal, Wilshere, Carzola, Welbeck and Ox.
That team can give any team a run for their money.
The only other consideration apart from fitness is Arsene’s tactics.

That is the problem though, when we play the best teams we are normally relying on the likes of Bendtner and Silvestre…

Even in 2006 we had a completely makeshift backline.

Diaby to score the winner rebounding it off Robben’s crotch. That’s the dream.

If I may adjust…

“Diaby scores! Amazing goal! Robben was in the box guarding the back post on the corner and Diaby, yes Diaby, unleashed his fury and it appears the ball is imbedded in the area of Robben’s little man and he’s fallen back cross the goal line and into the goal. He’s not rolling around. This must not be a dive by the CDOMC (Cheating Diving Old Man C|_|ny) Arsenal wins the Champion’s League on a Robben own goal!”

What I would do to witness that happen…

I had a strange dream last night where we beat Monaco, then drew Chel$ski in the quarterfinal, and also in the FA Cup semi-final, which resulted in the following fixture list for April:

Fortunately we won all four matches 4-0.

We should hammer them at the Emirates before going there, but reality is we like to do things the hard way so we will see

Now, it would funny if somebody DID send him the turd in the shoebox

Imagine the journalist: “Arséne Wenger, is there any truth to the rumour you sent a turd in a shoebox to Berbatov?” Wenger: “Look, at the moment it is difficult to say. It is always the same with turds. In the first few hours after breakfast, things are quiet, but I believe if we can find a turd of exceptional quality who can contribute to the gesture of shitboxing Berbatov, in the while before dinner, we will be open for suggestions. At the moment, we are not close to shitting into anything”

Perry S.
Reply to  The Only Olivier is Giroud

wow this excerpt is worthy of a blog post by itself. amazing.

Henry! Chance!! Goal!!!
Reply to  The Only Olivier is Giroud

AS17 is for A.Sanchez not A.song
Reply to  The Only Olivier is Giroud

Dylan
Reply to  The Only Olivier is Giroud

I think you’ve just won the internet for the week.

RSAGooner
Reply to  The Only Olivier is Giroud

Touché, I even read this in that imitation voice of AW that you love.

When you say ‘sending a turd in a shoebox’, do you mean throwing a turd covered box right in his languid, lazy face?

And what has flammini said? And sanogo? A box infested with dysentery would serve berbatov better not least because of his previous connection with spurs.

Will definetly be a hard game, would be good for the club to get some more money if we should reach the Quarter-final. Sadly, I believe that our squads is a little bit too thin in order to compete with the likes of Real Madrid, Chelsea, Bayern Münich, Barcelona.

Chelsea won the Champions League with a thoroughly mediocre team that only managed 5th in the Premier League. We have a chance, just like anyone else.

Yes, but our tactics differs quite a lot from chelsea’s. They park the bus and play defensive counter football against the top teams. We play offensive football, now that will not work particulary well against the likes of Real Madrid, Bayern Münich, Barcelona.. As we’ve seen in the past.

Lack of quality? Ozil, Theo, Sanchez, Ox, Welbeck, Girroud, Jack, Ramsey etc All we need is a quality cd and dm and we are sorted. We also have experience of winning a cup now so we can do it.

They sound relieved but just have to say what they are expected to say.
Nobody said Bayern would be tough last season because they already knew.
In their heart of hearts, they know this is our brightest chance of making QF in 5 years.

Blogs, check out the service from shit express dot com. 😉

Take me to Church, and I’ll worship like a dog……….My favourite song now….Hell yeah

Hey Gays! Can I come back now? Miss my Arsenal gays!!

Arsene is a sly old dog isn’t he. At three nil up against Anderlecht he thinks ‘hmmm, who do I prefer to play next, Monaco or Juventus?’ He remembers how Monaco sacked him twenty years ago and decides he wants revenge,then passes a sly note to the Ox on which he has written ‘ we need to draw this game, we need to let in three goals quick. Tell all the lads but do it in that sly hand over mouth way so the t.v cameras cant pick it up”. Thirty minutes later his plan had come to pass. He… Read more »

If Chelsea could win the CL in such circumstances. We can certainly hope to win it. Frankly, it is the performance on the day that matters. Each game is a different challenge. With a decently fit squad, we can cause problems to any of the remaining teams…C’mon Arsenal! time to do something memorable.

A couple cartons of smokes in that shoebox ought to slow him down a bit more (if possible).