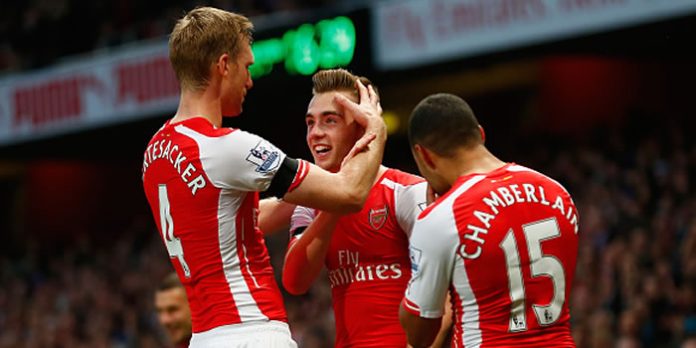 Arsene Wenger has revealed that Calum Chambers first caught his eye at the start of this year after an impressive showing for Southampton against Arsenal.

The 19-year-old played at right-back for the Saints in a 2-2 draw at St Mary’s on 28 January and ended up signing for the Gunners exactly six months later after impressing Wenger with his ability to read the game and his willingness to spring into attack.

Reflecting on his decision to sign Chambers as defensive reinforcement, the boss told the official matchday programme:

“The first time I watched him was in our 2-2 draw against Southampton when we played them away last season. I was impressed by his understanding of the game and his interception qualities.

As well as that, I liked the fact that he was early on the ball. His reading of the game and his transition to quickly go forward also stood out, and his touch was good as well.

“I checked his birth date after the game and was very interested.”

Signed for a hefty £16 million after marking only 22 appearances for the Saints, Chambers has gone on to thrive at Arsenal where he’s already made 20 appearances in all competitions, in the process earning himself a couple of caps for England.

The teenager’s accession to the national team has impressed fans and teammates alike, with Kieran Gibbs telling Arsenal Player:

“That’s a sign of someone who’s going to be a great player for the team because he’s made it look easier than it probably is for him at his age.

“You have to admire that and give credit to him. He’s going to be a hell of a player.

“He’s fitted in straight away. I didn’t know him before he came but you feel like you’ve known him for a long time. He’s come into a good group.”

Hopefully he replaces Flamini as our DM by January.

Yes some sense finally why Not? We are supposed to be the fucking ARSENAL right.A big fucking club incase you missed.

and then we buy Nathaniel Clyne from Southampton to cover RB! Keep your eye on this exciting player today, even though I hope he has a rare stinker of a game against us.

I really think Chambers will be a great DM in the future. He loves defending and he has great engine, great passing ability and also reads the game very well.

Maybe when Jenkinson comes back next season he could hand Chambers a run in DM position?

I’m absolutely sure he would be a beast DM.

I am not absolutely sure, but he has all the attributes to be a great DM. The one thing that most impressed me when I first saw his game was his passing range. He was playing as a CB and does a pinpoint pass all the way back from own box to someone beyond the halfline and looks so comfortable doing that kind of thing. That kind of passing accuracy and range is something you don’t see everyday at Arsenal and I believe he can add something special with that to the team if he indeed ends up at DM.

My gut feeling is Chambers will not be used as a RB in the future. For his reading abilities, touch & calmness on the ball, I foresee a CB or even a DM role. I just hope he doesn’t end up like phil jones (jack of all trades, master of none) and stick with a posititon for the long term.

Chambers has been a real gem. It’s unbelievable that this kid is still 19 years old and already showing this kind of quality. Sometimes I find myself taken aback by something he does, then reminding myself that he’s 19, then feeling even more taken aback. He’ll have his lows I’m sure but we’ve got a hell of a player on our hands. Perfect addition to the squad

When I saw the price tag I thought wtf are we doing falling for that English premium price bullshit. Turned out it was the talent premium price bullshit. I can’t believe how so quickly I am more than comfortable and even happy to see his name on the team sheet. I just hope he goes to cb or dm, I’m still rooting for jenko to make it.

This is the type of signing I’ll miss when Wenger leaves. Question to the #wengerout-fascists: wasn’t this the DM signing (but due to injuries elsewhere and a lack of decent/available CDs he can’t play there right away)?

This kid not only got talent but also assurance and confidence, unlike Senderos or Djourou who would crap their pants everytime a cross comes in the box.

This is why i hail him as future ‘Philip Lahm’. Waiting for couple of seasons to see the best out of him.

LOL This will go down as one of Wengers classic quotes parltly also of how Superb Chambers is gonna be!

I’d also be keen to see him given a shot at DM, particularly with Jenko looking pretty good for West Ham – that said I always felt that TV5 could’ve been a shout for that spot. Injuries maybe meant that he didnt get the chance, but bigger issue hasn’t changed. If you’re playing a 3rd choice CB at DM then leaves you more open to injury crisis. so aye, I’m all for it but still need to pick up a decent CB to cover, or somehow find time to give the likes of Hayden a bit of time to show… Read more »

Would like to see him tried out at DM. Has the close control to do it. Only issue is that he still picks up silly yellows, yellows that would turn red in the middle. Still, amazing buy given some of the dross bought this summer (put down the pie, Luke Shaw).

I think he will go to DM but he needs a little time & experience which he’s getting as a FB. Young DMs can charge in and give away kick (& pick up cards) too much. He does seem rather mature for his age but still needs to calm down a bit.

Pretty sure chambers has stated he wants to be a CB for club and country. Personally I think he could be a world class CB. There is the temptation to mould him into a matic style dm but if the player is THAT good at CB and wants to be a CB, you play him as a CB.

All you people who want him to be played as a DM…
Would you slam the manager for not signing a ‘proper’ DM if he doesn’t perform in that position? I think you probably would

It’s actually frightening how good callum could be.

This guy will be an arsenal great irrespective of where he plays.. be it CB, DM, RB or even LB.

I am only worried about the yellows

What happens if we get this fabled DM and still keep losing?

obviously we start screaming for a ‘world class ‘