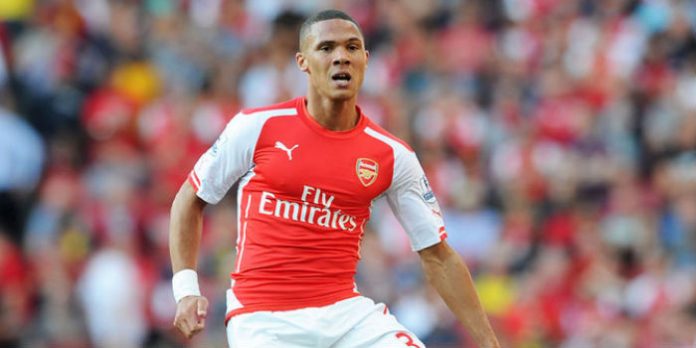 Kieran Gibbs says fighting with Nacho Monreal for a place in Arsenal’s starting lineup underlines the strength in depth at the disposal of manager Arsene Wenger.

The England international and his Spanish teammate have made 22 and 24 starting appearances respectively this season with Monreal already surpassing last year’s total after a stint as an auxiliary centre back earlier in the season.

Reasserting that he has no problem competing for the elft back slot, Gibbs also outlined that the Gunners have the quality across to cope with a three-pronged attack on the Premier League, Champions League and FA Cup.

“It is probably the first time it has been like this for a while,” said the 25-year-old after an eye-catching showing against Middlesbrough.

“It has been easier (to get selected) in the past. Now, when you keep everyone fit for a while, obviously you can only fit 11 men on the pitch.

“We need a big squad and we certainly have the squad to compete on three fronts at the moment.

“And we are hungry to defend the (FA Cup) trophy. We are not just going to think that, because we won it last year, it is not in our priorities, because all three competitions are.

“I have to be patient before I play and just take my opportunities. We spoke the other week and the boss just said that, since I came back from my injury, Nacho (Monreal) has done well and given me a good challenge.

“He wants me to stay focused and, the more both of us are on the top of our games, the better it is for the team.”

A very mature outlook for Gibbs that builds on comments he made last week about the ‘privilege’ associated with playing for a club as prestigious as Arsenal. He looked very sharp yesterday, providing an attacking threat that pinned Boro back throughout the first half.

When you consider some of the players who’ve provided back up at left back in the last decade it’s a real bonus to have such reliable figures competing for regular football. Long may it continue.

It’s true. Once we’re on our best, every team would struggle against us.

We have the best squad right now in the prem. City and Chelsea may have a slightly better 1st eleven but overall squad, give it to the gunners.

love the list, but I feel it’s a little harsh on Clichy.

Great, been a long time since we had this attitude in the team.

Makes me think we can go far, great attack, improving defence (which was the best in 2013, so can come back).

COYR, lots to look forward to.

One player illustrates this point at LB – Andre Santosser.

Andre Santos, overweight, poor attitude. That’s what we used to have at LB.

Must be a different Andre Santos to the one I knew:

Yeah he wasnt overweight ..
He was “bigboned” and had a glandular problem Plus the camera adds ten kilos so there.

Gibbs, Monreal or Santos? Which two would you pick out of them?

Why is this even a debate?

Hey gays, I would pick me and me for the two spots

I did think you were a great gay and skilful, just needed to apply yourself more.

Andre, do you mean guys?

I love me some Gibbs. Hell I love everyone on the team atm. Competition for every spot only brings the best out of the team. It’s been a long time coming but finally glad to see it happening. I can’t confidently put together a starting 11 without having debates about all but a few positions. Gibbs has a bright future and can certainly out-do ca$hley something..

The attitude bodes well for the trophy hunt this season – FA Cup.

Lets go for 2nd place in the league (of course hoping for a major slip-up by Chelsea and ManU for good measure). While getting past Monaco to start with in the CL

No doubt we can compete on all front. Injury just seems to be our main issue every season. I know it’s impossible to have every single player fit throughout the season but just one season of having a settled squad and we’re winning the title.

and although the jury is not in yet, our “Angel of Death” put in a decent showing against a team on a good scoring run.

We have a wonderful squad. All positions with either proven talents or ones with great potentials. I really hope wenger gels them into a team that would make up for our recent trophy drought this season onwards.

It’s got a better balance to it now for sure, full back position is very strong now with Monreal, Bellerin and Chambers stepping up and adding competition. We are never going to have everyone fit though, so just as well there is depth.

I still think a DM will come in the summer with Flamini going out. That would leave Coq, Arteta and a newbie fighting for position. It seems to early to include Bielek unless he makes huges strides..

He just may, being rather tall.

Am just out of word. Incredible Gibbs plus great attitude. Wow.

I’m expecting at least 3rd in the league, champions league semi-final and the FA cup this season….sounds greedy but that’s the minimum this squad should be gunning for. Also, we the fans need something to shout about.

If we get an easy draw for cl q final, then semi final is the bare minimum.

On the other hand, if we get a hard draw and we can overcome it, there is a high possibility we may have an easy draw for the semi final.

Exciting times are around the corner…..COYG!!!!

On another note, squad-wise, it was good to see the article on ESPN about Podolski, and how he expects to be back next season, to compete for his place in the squad. Good attitude.

Vonnie
Reply to  Gunner in Canada

Poldi won’t be back, he’s too lazy and one dimensional. We’ve moved on and don’t have a space to waste. It’s a pity because he’s a really nice guy, but he’s just not good enough.

CB
Reply to  Gunner in Canada

A change in attitude from “Wenger said nothing to me. He did not call me or say goodbye,”

“I don’t need flowers or a kiss from him. But it is about respect, about saying goodbye. For me respect is important.

“I did everything for the club I possibly could have, except run around much on the pitch. I don’t believe I did anything wrong. I did not get drunk in a club.

Sounds like he is trying to rebuild the bridges he burnt, given he hasn’t impressed Inter.

0 in 6 appearances tends to make one a bit less bullish.

Perhaps he’s realizing what he had with opportunities on a plate for him at every turn.

If he put the same effort into running about on the pitch as social media and getting on with the fans he would be a top top player.

GoonerN16
Reply to  Gunner in Canada

You are kidding? If he returns, and that imo is a big if, he really will have to fight for his place in the team. Big time! Not sure about ‘great attitude’ arrogance perhaps? Or bravado?

I don’t think you are being greedy as I think third in the league is realistic, winning the FA cup and, depending on the draw, a place in the cl final

4th yet again would be a disaster for Wenger. Been blaming the financial situation for a decade now, but he has had 2 seasons now with money to spend and have blown a 100+ mill on new players in Özil, Alexis, Welbeck, Chambers, Debuchy, Gabriel and Ospina. So to finish 4th again or worse would no doubt lead to a character assassination by the media. He wil be stamped as over the hill and long since reached the pinnacle of what he can achieve as a manager. So lets hope we can see some progress in the league this season… Read more »

I think youre forgetting that City Chelski and United have spent even more than us over the last 3 to 4 years. So fourth place is hardly the diagrace you seem to think it is.

I hope the word “Blown” is not meant to imply that the cash was wasted. If that is the case, that would be just sad.
I can’t see any manager in any of the traditional top 6 prem teams who has performed better than Wenger in the last two seasons in terms of value-for-money signings.
We have a much stronger squad than at any time in the past 9 years. Injuries and nothing else have kept us from challenging for the league this year.

It takes longer than 2 years to revitalise a squad, now that we are putting the money in we are looking a lot closer to competing for the title. Pretty sure the media can’t assassinate his character any more, the level of criticism has been high for a while, babbling and dumb criticism (along with the occasional pertinent point) but it is there.

I don’t give a flying fuck what the media says about Wenger, it’s the character assassination from within our own supporters that disgusts me.

Mature criticism taking reality into account is fair. Unwavering agenda against regardless of progress and knee jerk insults are not.

I care about both as they feed each other. the media has a sustained campaign against Wenger since the invincible season – he has said a year earlier that it was possible and they ridiculed him. then he silenced them by doing it. Arsenal was always the more vulnerable of the top 2 with man utd so when the ill gotten russian and arab gains entered the league we were far more likely to drop down in terms of competitiveness. Yet the papers ignore the fact that we had been competeing with the star wars defence budget, while trying to… Read more »

“eflt back” eh News Hound?
Is that a dig at their height?

We need to use similar game approach as the one we used against Man City in order to beat Man Utd. So far, all our positions are covered by at least 2 players with the left back being one of the most competitive ones

The way he played, I feel Gibbs may deserve to start against Palace this weekend.